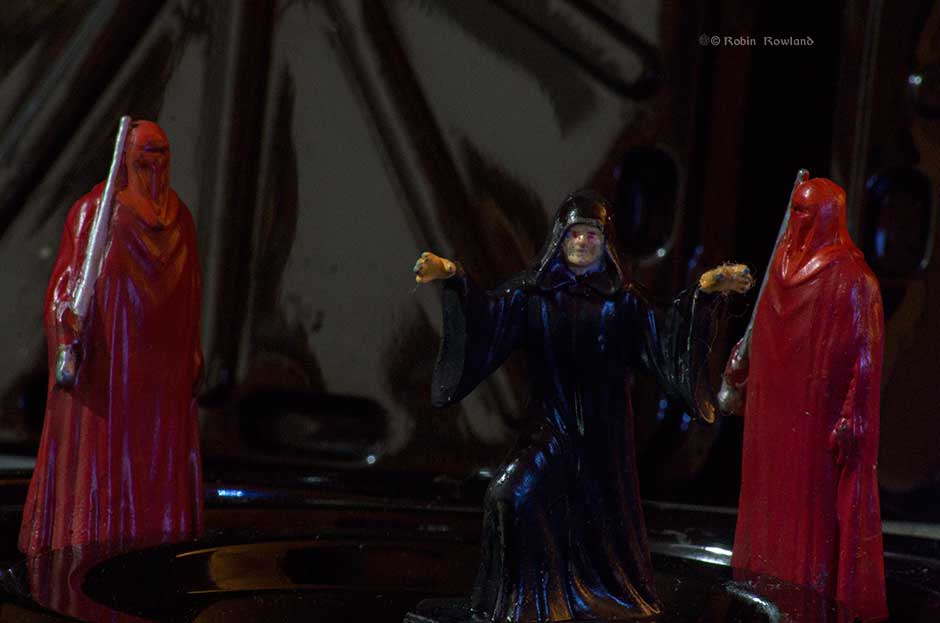 So here is my first project for miniatures and photography, Emperor Palpatine and his guards.

Now for the fun part.  George Lucas was inspired by the old movie serials from the 30s to 60s in creating Star Wars.

So here’s how my miniatures look using filters to emulate old movies.

Finally, how I created the set:

So here’s the “set” for the Emperor Palpatine shoot.  The round base originally supported WalMart’s delicious chocolate fudge cake.  I had kept the base several months ago as I was hoarding possible scratch building material.  The base is set on a piece of black poster board.  The background is a cardboard box spray painted black.  The two wall panels are also from chocolate cake bought from my local supermarket.

Lighting: Three lights on most of the images.  An LED flashlight as you see to the right of the setup.  On top of the box was a small LED light (designed for use with mobile phones, pointed at the offwhite ceiling. The third LED was to the left and about two metres away pointing just to the left edge of the box.

Once I had finished the tripod time exposure shoot, I wanted to get this shot of the set so I used the Alpha 55 with just the popup flash  at -2 without changing the lighting set up otherwise.  I used the same settings when shooting wider shots above with the Alpha 55.

1 thought on “Emperor Palpatine and his guards”