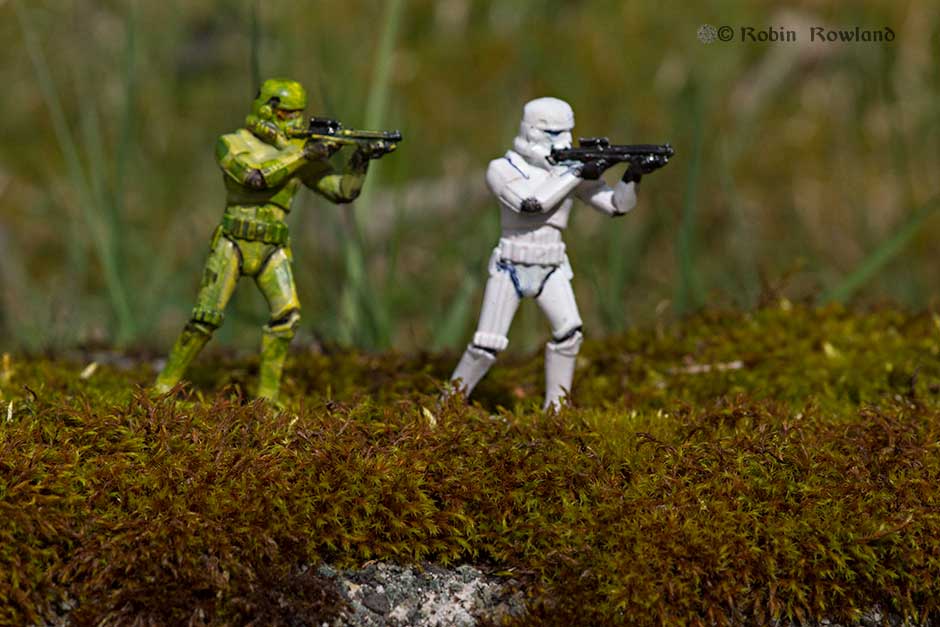 First this is completely non-canon (so far) and non legends. I fell in love with Star Wars the moment in 1976 I saw the original trailer “the story of a boy, a girl and a universe… a billion years in the making and it’s coming to your galaxy this summer,” months before the movie was released. Of all the scenes in all the Star Wars movies in all the galaxies, my favourite scene is still Luke Skywalker walking out to watch that double sunset on Tattoine. So this is just a bit of fun with a series I love.

When I began to transfer my love of Star Wars into model making (as you will see on the right hand menu) I began to wonder for the first time (about the same time that Star Wars Rogue One came out last December) why after so many years, the Storm Troopers are still in white body armor?

Now I’ve worked in movies and television for 40 years (most of that time in TV news). Always the most important thing is “the look” which is part of the production ethic and creates an atmosphere for both the actors and  the audience. John Mollo, who passed away just a couple of weeks, created the original costumes and most of the look of what came to be called “A New Hope.”  based on concepts by John McQuarrie .

Mollo won an Oscar for his work on A New Hope, and the white armored Storm Troopers became iconic, along with Darth Vader, CP30 and R2D2. So I am sure Lucasfilm and now Disney stick with what works. Later movies have enhanced “the look” but haven’t changed it. But maybe it’s time to question if that white look is still working?

Now if we take it from the point of view of the Empire and later the First Order, we have to ask whether the upper echelons of the Empire or First Order actually have any respect for the Storm Trooper grunts?  (Even if they are the movie “bad guys.”)  Both Galactic Powers have spent billions of credits over the decades on  new  but vulnerable Death Stars ( a clear waste of taxpayers’ money),  then bigger and bigger and even bigger Star Destroyers.  There are new and advanced Tie Fighters and other space craft. But the poor Storm Troopers, what about them?  They haven’t had an equipment upgrade in 40 years.  (The equivalent  would be using Vietnam era or perhaps even Second World War  technology  in today’s  fighting)  So, imagine, James Earl Jones in his Darth Vader voice echoing Donald Rumsfeld’s infamous “You go to war with the Army you have – not the Army you might wish you have.” After all whether they’re clones or draftees, the Storm Troopers are no more than Imperial/First Order blaster fodder.

Why even have body armor when a rebel fighter in grubby clothes can take a Storm Trooper out with a blaster or if he/she is a Jedi in some robes can take you down with a lightsabre? What good is body armor if  the blind master  Chirrut Îmwe, can take out an entire Storm Trooper platoon?

Just having the  Imperial/First Order soldiers in cloth uniform could be just as effective (and much more easy on the mobile credit dispensers of the war-burdened galactic taxpayers).

Any scene in any Star Wars movie, the white clad Storm Troopers stand out in any environment. Even if rebels or other enemies have super tech sensors in that galaxy far, far away, most of the battles are line of sight, which means the Storm Troopers are easy targets even for the most inexperienced rebel fighter.

So I let imagination run and here is the result, if you are drafted or recruited as a Storm Trooper, wouldn’t you want some camo?

The rebel fighters are part of a related project,  a forward observation post diorama which you will find in Star Wars in camo II. 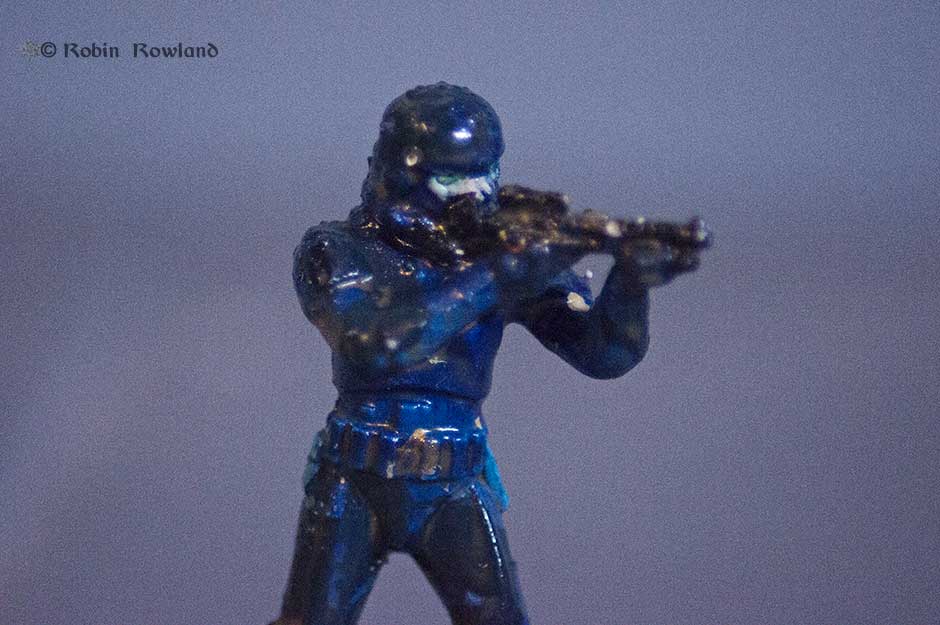 Disney is branching out from the original Star Wars story line with the announcement that director Rian Johnson will create a new trilogy somewhere in that big galaxy far, far away, that is a separate story line from the Skywalker family epic. As Ben Child wrote in the Guardian “it also suggests that Johnson is the man to take Star Wars into the kind of dangerous new territory that might be required if these movies are to last another 40 years… Star Wars directors cannot make movies about Death Stars, fallen Jedi and Skywalker scions for ever; they must eventually begin to truly expand the universe. New worlds, races, supernatural phenomena and coteries of evil are needed if we are to be remotely interested in a galaxy far, far away in the year 2050. ” 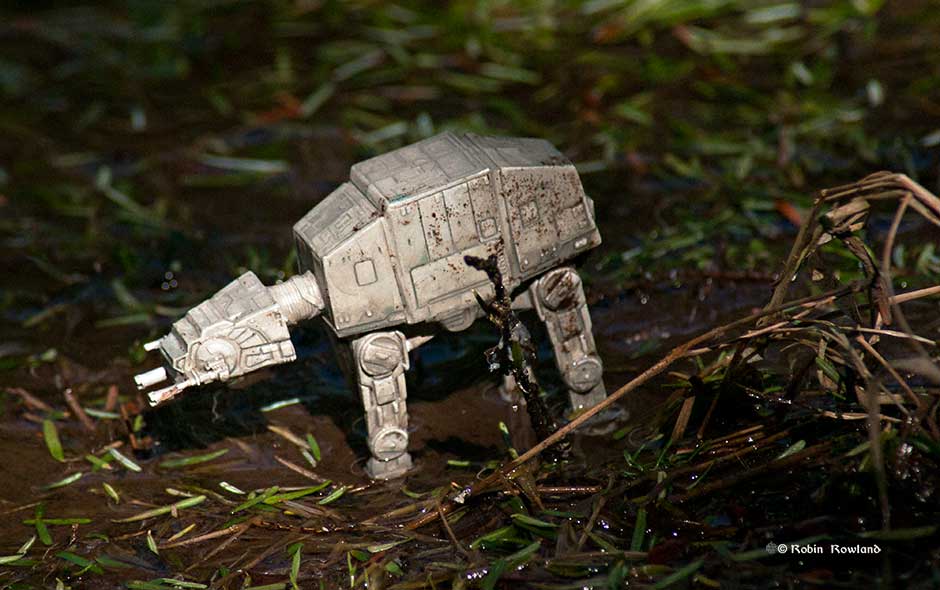 An AT-AT on patrol in swamp, planet unknown. (Robin Rowland)

Star Wars Command AT-AT photographer in the woods near my house. Now that it’s spring will be able to do more outdoor photography where appropriate (the small approx 54mm Star Wars Command figures don’t always blend into a real world setting as easily as the larger 3.5, 6 and 12 inch figures). 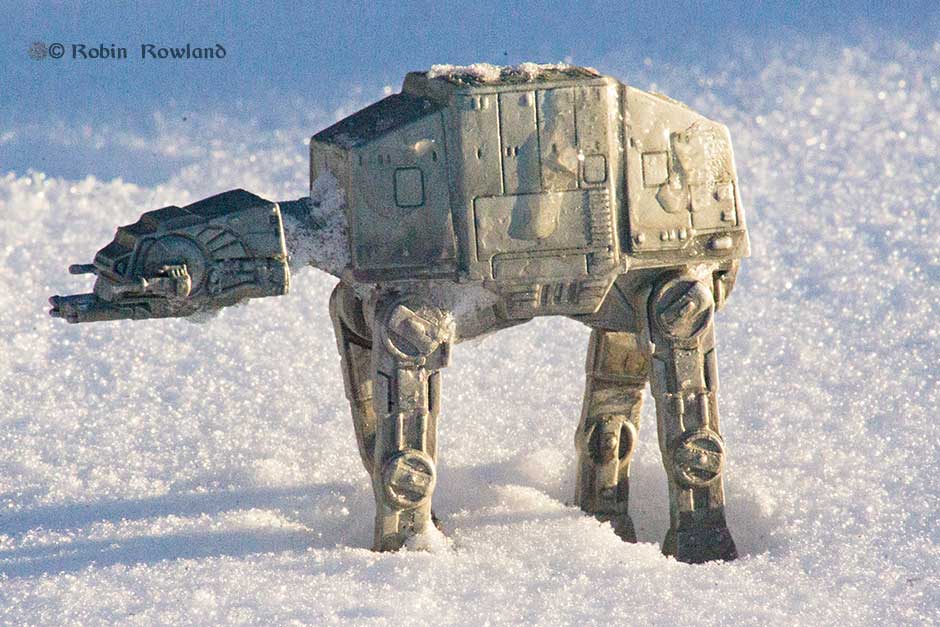 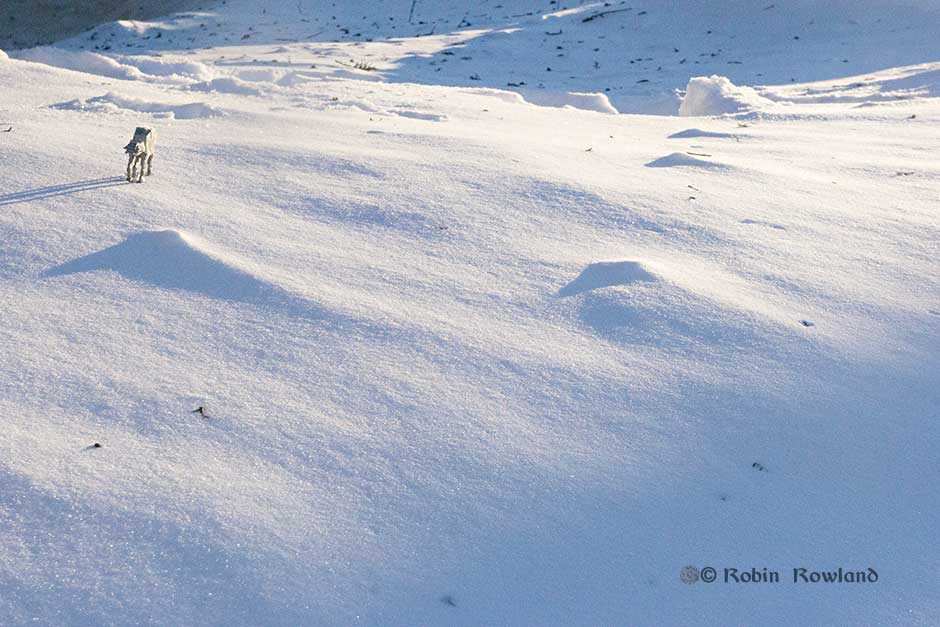 As the sun comes up this lone Imperial AT-AT (All Terrain Armored Transport) sets out on patrol on icy world. Although this Imperial combat walker is 22.5 metre high, carries a crew of four and up to 40 snowtroopers as passengers, it looks insignificant against the landscape. (Robin Rowland) 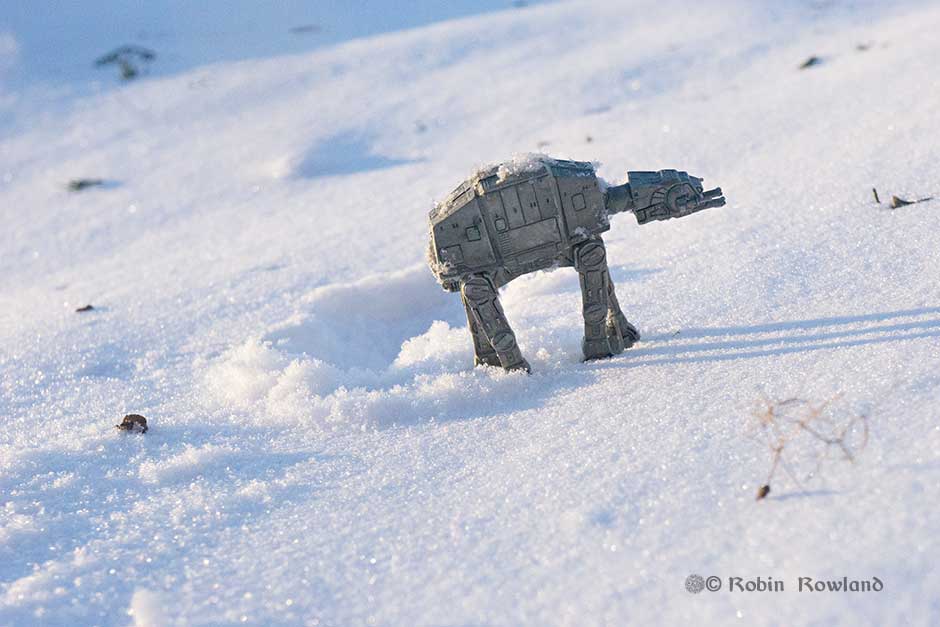 The journey is uphill into the mountains. (Robin Rowland) 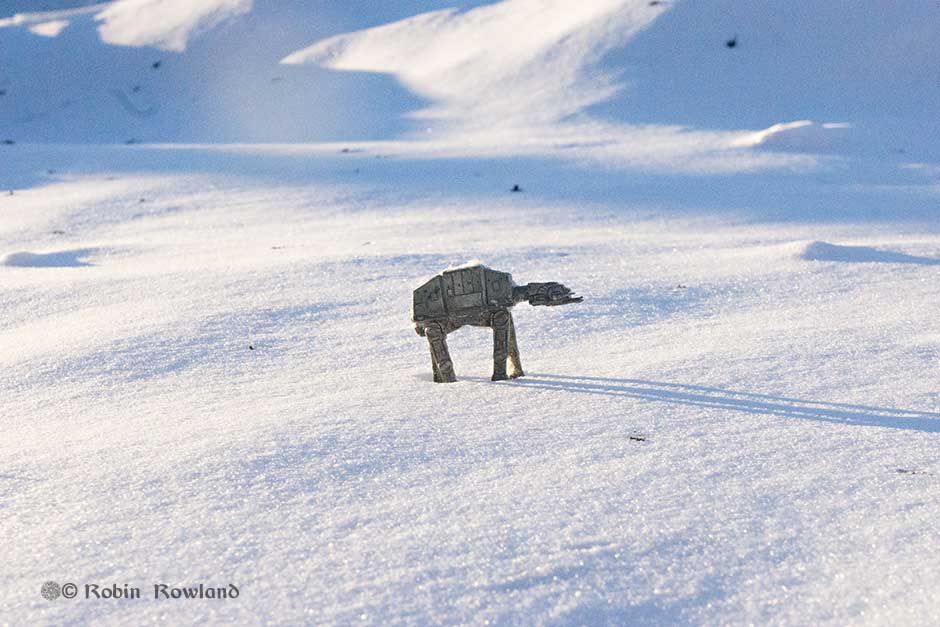 Through a mountain pass. (Robin Rowland)

The Imperial Walker All Terrain Armored Transport, a symbol of the might of the galactic empire. 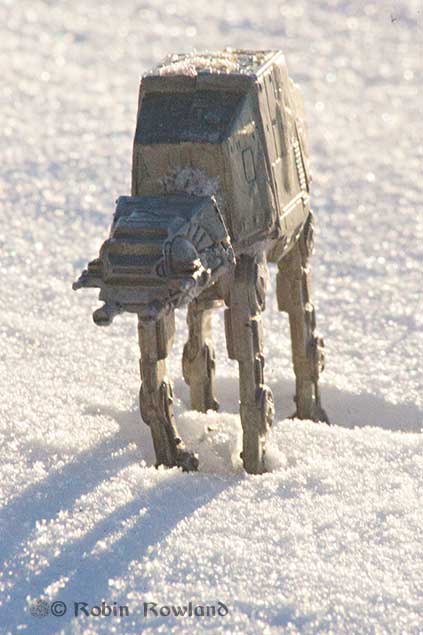 An attacking AT-AT coming out of the blinding early morning sun would strike fear into any group of rebels. (Robin Rowland) 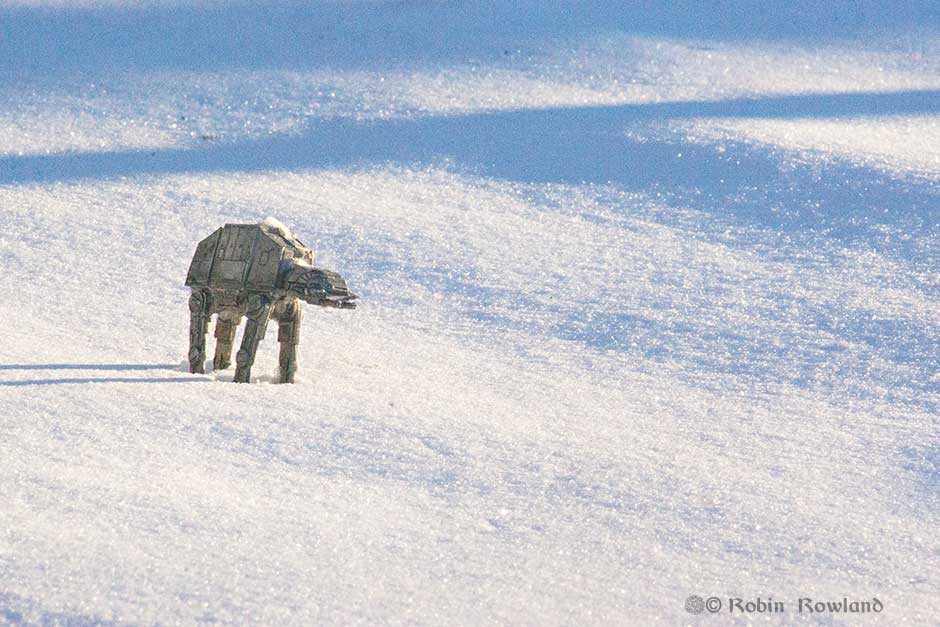 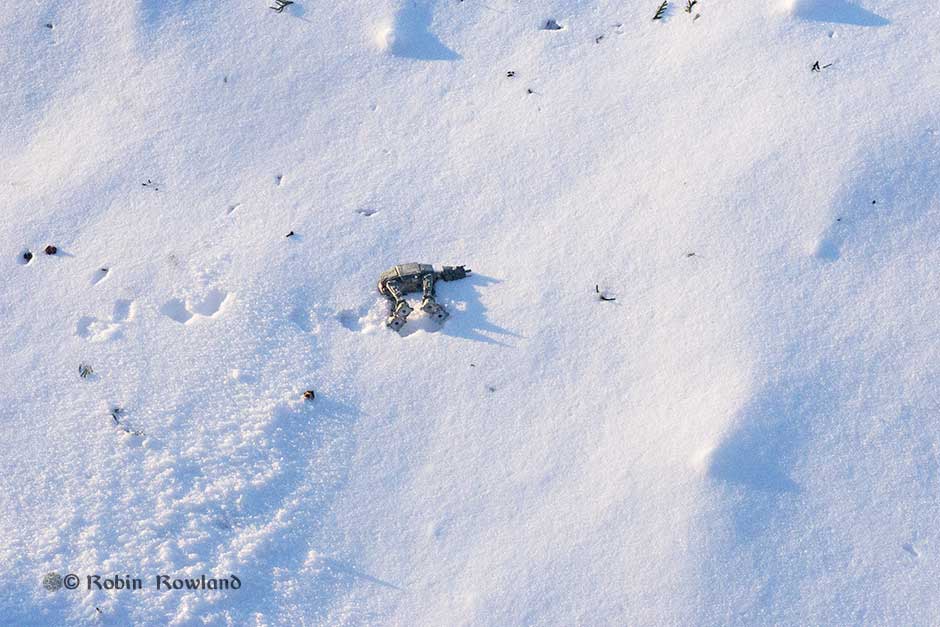 Not all the walkers return safely from their mission. The crew and passengers of our AT-AT have to pass one that didn’t make it (Robin Rowland) 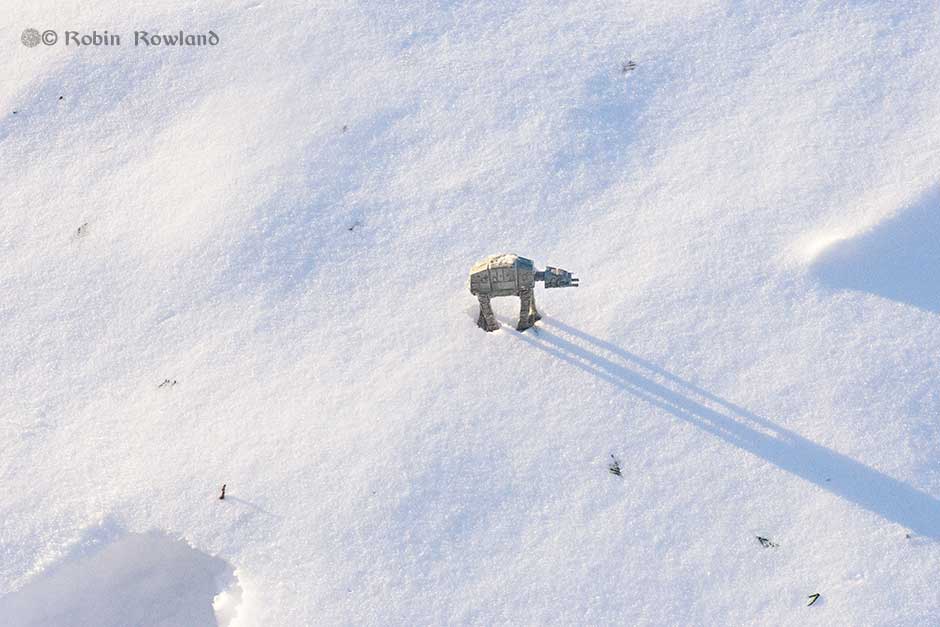 A rebel snowspeeder in its own dawn patrol spots the AT-AT so their troops are warned. (Robin Rowland) 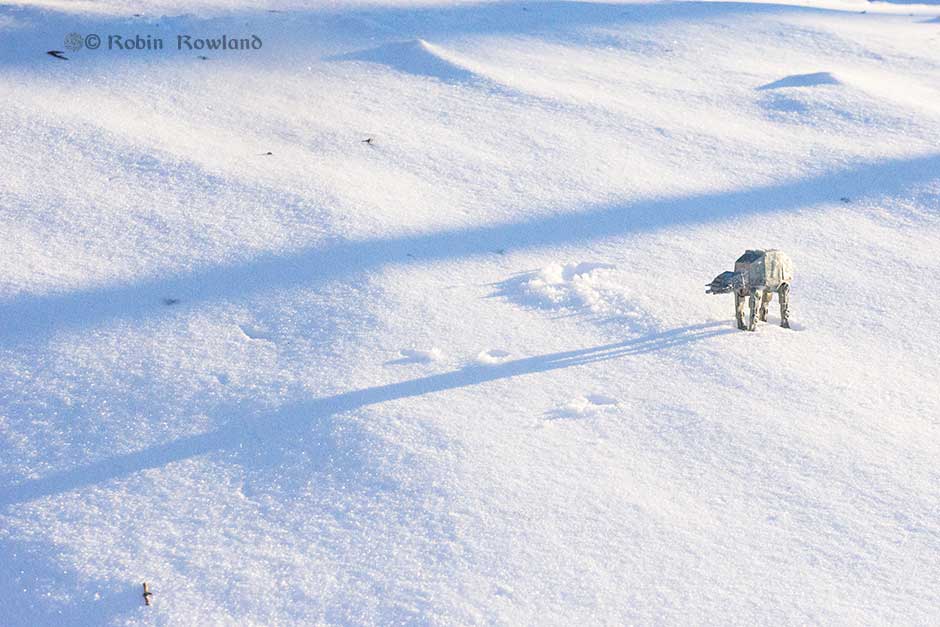 The AT-AT reaches the limit of its assigned patrol and turns and heads back to home base. (Robin Rowland)

Hasbro Star Wars Command AT-AT. This time after spray panting with white primer, i used a series of washes, first a couple of diluted grey washes, then a grey wash mixed with white and blue, then I added a steel colour to the grey wash and the finished off with a final grey wash.

All images were taken in my front garden in -15 C (wind chill -25 C). In the current cold snap I noticed gorgeous light on Sunday as the sun came up over the mountains of Kitimat. Monday was cloudy but today Tuesday was perfect. Cameras. Wide shots taken with Sony Alpha 6000 with 18 to 55. Medium shots with Sony Alpha 6000 and Sony Alpha 77 and close ups with Sony Alpha 77 with a Tamron 70 to 300 set on macro mode. The one problem was that when I tried to create tracks, the snow was so soft that in most cases, all that came of it was a big hole in the snow that didn’t look right. Also the wind kept blowing the model over. 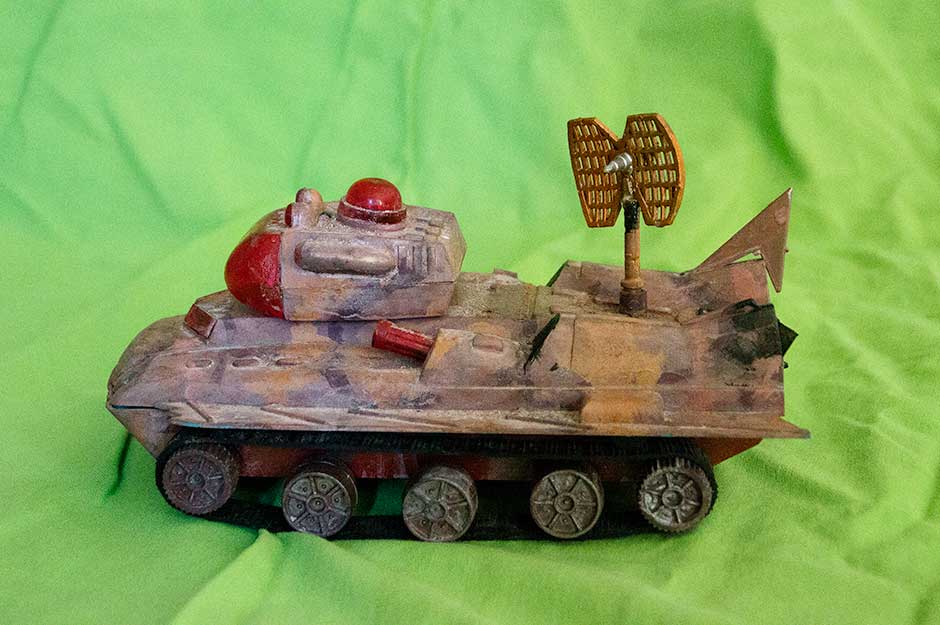 This “tank” — I guess you can call it that — is about fifty years old.  I was always making both kit built and scratch built science fiction and space models back when I was a teenager.

I am pretty sure I built this model when I was about sixteen. 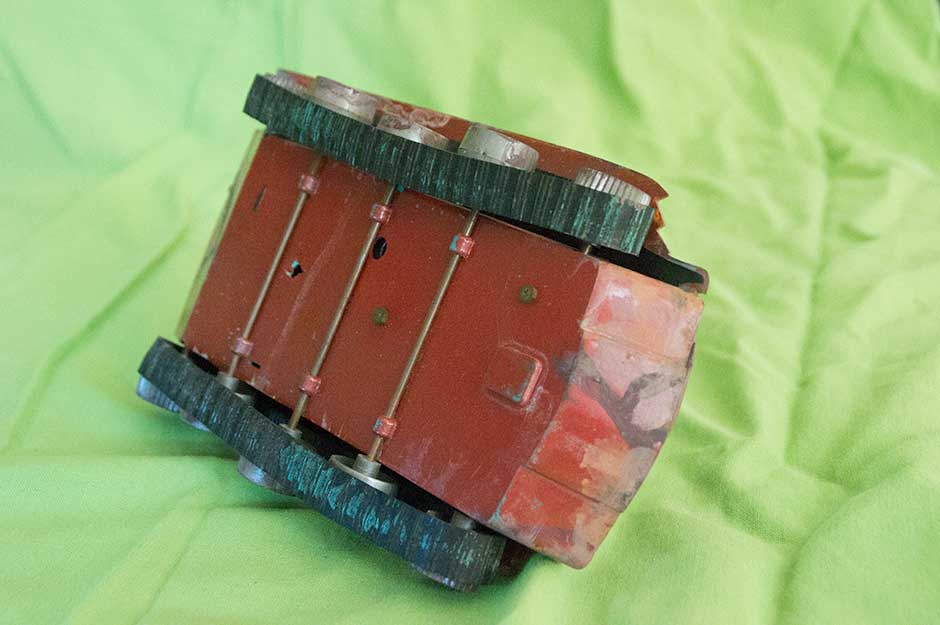 As you can see from the bottom, the original plastic was a dark red and, if I remember correctly, I copied the camouflage from the painting on the box.

I have a vague memory that the kit was Japanese. I have posted a picture with the science fiction modelling group on Facebook, asking if anyone recognized that model but so far no one has. 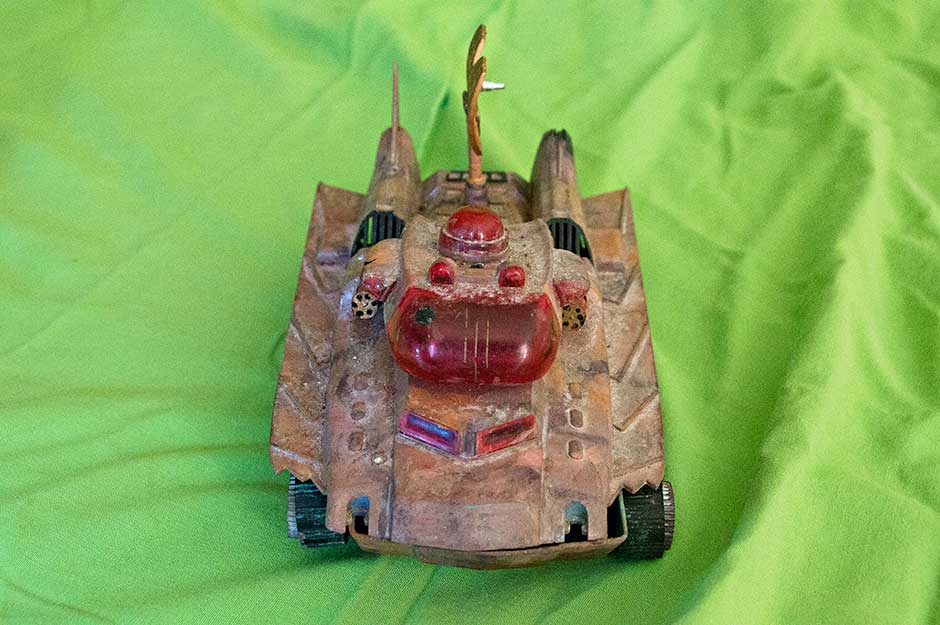 Back ages ago, the tank (or perhaps armoured fighting vehicle) was on diorama base with a purplish alien landscape. That is long gone. I found the model in the bottom of a box of some other modelling hold overs from my teen years that I had hauled with me all those years. So now I am getting back into modelling, I intend to reposition the vehicle in a new diorama and will post that when it’s complete.

There is just one update with the model. One of the tail fins broke off over the years, so I added a black wash as “battle damage.”