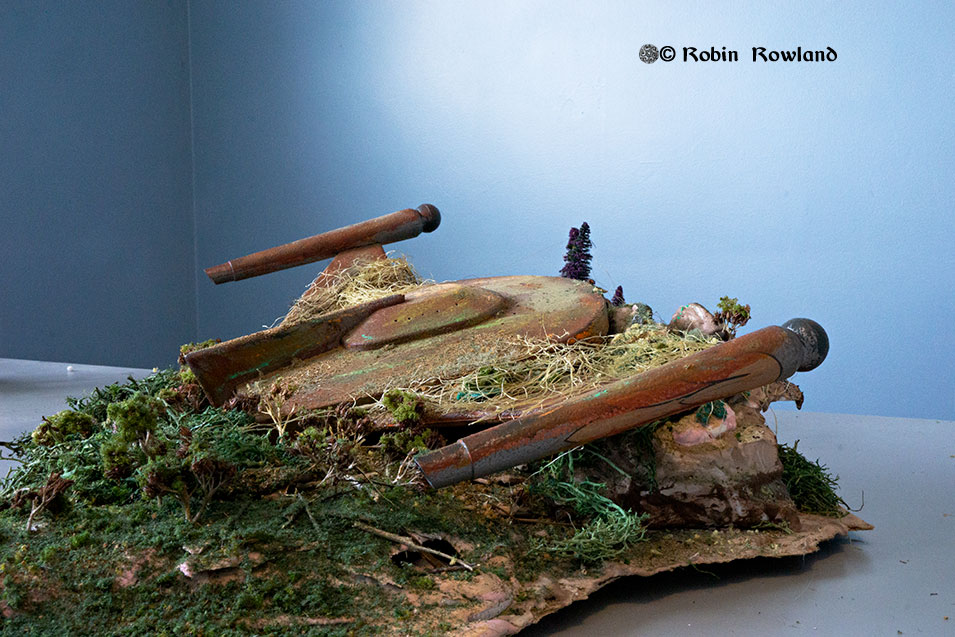 My latest project, The Rusty Romulan, was begun to solve a very old problem. When I was a teenager (yes that long ago, when Star Trek the Original Series was still on the air on NBC) I built all the available Star Trek models from AMT, including the Romulan Bird of Prey.

There was one problem with that model. There was something wrong with the spray paint I bought (memory fades) either at my neighborhood hobby shop or perhaps a hardware store was faulty and the metallic paint was rough and potmarked.

Somehow, unlike all the other models I built in those days, the Romulan Bird of Prey was the only one that survived. Like some other models, it ended up in a box of books that I unpacked when I retired. (Yes it was that long ago).

So the Bird of Prey was hanging around on a shelf until one day I had an idea. Living in northern British Columbia you often come upon crashed cars in the bush, completely rusty and overgrown. Or illegally abandoned vessels rusting on a shoreline and also becoming overgrown.

So why not make lemonade from the Bird of Prey and turn it into a rusty Romulan.

So that’s what I did.

The Romulan Transportation Safety Board has not yet investigated the crash. The Bird of Prey is listed as missing. So the reasons for the crash (and if the crew survived) is unknown. The space craft managed to reenter the atmosphere intact. There was no significant battle damage and the crew did not trigger the self destruct. However there was clearly some exterior damage, either in space perhaps causing the emergency landing or during reentry.

I scored the old model with my Dremel sander on a very slow rotation. Then painted some areas black for the re-entry burn and then added the initial rust in light washes.

I wanted the Bird of Prey to be somewhat upright, so it came to rest against a ridge so that the livery can be seen. With that design in mind, the decades on the surface of this planet alien to both Human and Romulan will take its toll on the unlucky Bird of Prey.

I wanted an alien look while maintaining the scale. The Bird of Prey has four decks and is 21.9 metres (71.8 feet) high by 90.6 metres (297.2 feet) wide. So the trees and other vegetation (allowing that this is an alien world) had to be proportional.

One of the species of vines on this part of the world are made from ornamental moss from a dollar store, the kind usually put in planters.

The “conifers” are the standard, cheapest, model railway trees, with purple foam added.

The trees are Woodland Scenics Light Green Forest Canopy using just the very tops of the plant material. (Chaos theory is at work here, the tiny tops are just like the bigger trees designed for a model railway.)

The original AMT model did not have the portholes in the Bird of Prey so I drilled the holes. The fibrous material is a model railway grass and the orange fungi is a chalk.

The built up leaves on the hull are just that. Autumn leaves collected, dried and then pulverized in a blender. (It is another model railway technique. However if you are using a blender make sure to use one that comes with both glass and metal containers–and use the metal one).

The final touch, the second species of vines, are “silk” from corn-on-the-cob.

May to October- Railway salvage?
It was after I finished  A River Kwai Story The Sonkrai Tribunal, that I decided to build
a model railway based on my research, to model the real bridges on
the River Kwai.

But at that time there was trouble brewing.
Management at CBC had applied for conciliation and that had started
the clock ticking towards the lockout that began in August. Money was
tight, but my basement was full of material left by the one the
previous owners of my house, that could potentially be used for a
layout. A large pile of wood, probably structural wood, taken down
when the wall was taken down between the living and dining rooms.
There were also two doors in the basement, not the standard hollow
doors available at your local hardware store. There was a solid door,
same pattern as the rest of the doors in my house and a hollow
cupboard door. So that became my planned bench work. The plans were
put on hold as it became clear that there would be a lockout and I
was working on the first round of revisions of the manuscript. In
August, the model railway gods favoured me while  my income was
reduced by the lockout. I was able to get more salvage material from
construction sites on my block. The first was some old-fashioned wire
mesh, three different types, which I picked out of a pile of
construction waste. Then a couple of weeks later, another house on my
block was being renovated. The exterior walls were covered in lovely
blue extruded Styrofoam. And a colleague and lockout picket captain
owns the house next door, so I was occasionally a visitor and one day
I was there when the contractor’s crew was outside and I asked
and received all their scraps.

The
Garret Tree for my blog on the lockout) and once my pay cheque
resumed, I dropped by my local Home Depot and bought one large piece
of 4 x 8 one inch pink Styrofoam and a couple of pieces of two inch 2
x 8 foam. I knew the rough layout and I what was essential, the great
Sonkrai trestle bridge in the centre of the layout and the
spectacular Wampo viaduct on one side. As well, by watching the
forums and e-mail, I concluded that for viable freelance operation,
the railway needed an economic reason to operate, over and above the
long-standing idea that it should be a short cut from Southeast Asia
and China to India. When I visited the region in 1997 I saw the
devastation of clear cut logging, similar to the cut, clear and leave
the slash that so familiar to me when I was growing up in British
Columbia in the 1960s. The Imperial Japanese Army had created small
sawmills along the route of the railway to produce ties and material
for bridges, so my economic assumption is that there was a small
post-war logging and lumber industry that provided some support for
local trains. So that meant a branch line going to the sawmill. The
layout is designed as point to point as the original railway was. But
since the Burma Thailand Railway had what were called air raid
spurs spur
lines with little clearance from the jungle that were designed for
trains to hide during Allied air raids, the return loop of an oval is
partly the air raid spur.

January
and February Going slower than I thought it would, but
then by monitoring the forums, it seems it goes slowly with everyone.
I glue down the base extruded Styrofoam. Then I layout the basic
track plan, using Kato Unitrack for the lines. I planned to use Atlas
Snaptrack for the many bridges (there were 688 bridges on the Burma
Thailand Railway). My plans at this point call for four trestle
bridges based on the photographs and drawings of the real bridges on
the Kwai. (The movie bridge had trusses, the real ones did not) plus
a plate deck bridge (Kato model) based one of the railway’s
steel bridges in Burma. The problem is for this mountain layout is to
figure out the maximum inclination that can be modeled. The Burma
Thailand Railway steep inclines and in that location two locomotives
were used in a push-pull configuration.