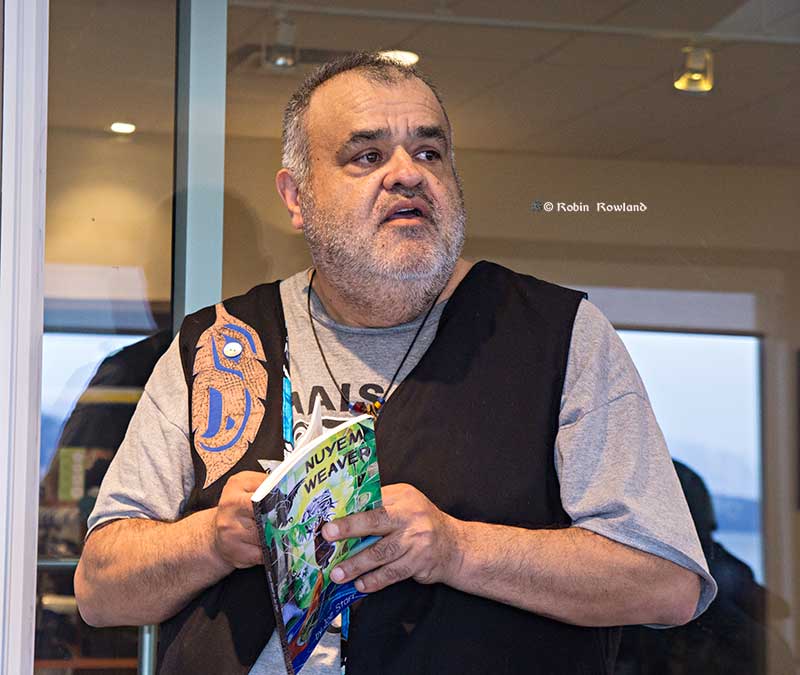 In the opening short story of Haisla First Nation author Joe Starr’s collection, Nuyem Weaver, an elderly woman, the weaver, makes her last journey, by canoe, to the site of an abandoned village where the yellow cedar trees call to her so she can strip the bark and weave a new floor mat, a thlee-we in the Hasila language. When the old woman returns home, she “straightened out her old thlee-we. She unrolled her new one and laid it over the old one. Just like life, everything was in layers.”

Just like the two woven yellow cedar mats, Starr’s stories are multi-layered. One layer is a new addition to the strong tradition in First Nations literature of the past 40 years, as aboriginal people adapt life and culture to the reserve, the big city or both. In another layer, Starr weaves in west coast aboriginal spirituality and that leads to a third layer, we find the North American version of “magic realism” I first saw in Thomson Highway’s plays in Toronto thirty years ago. Thus the collection will appeal to wide audience beyond the west coast First Nations, those interested in fantasy, mythology and in one story, also the “Two Spirited” (gay and lesbian).

Starr, a retired teacher, debuted the book of short stories at a launch party in Kitamaat Village on April 14. Nuyem Weaver is inspired by traditional Haisla stories he heard as a child. Nuyem, according to the Haisla Nation’s evidence before the Enbridge Northern Gateway Joint Review Panel, is Haisla traditional law “based on the corpus of Haisla mythic and oral tradition.”

There are ten stories in the book. Starr’s favourite is about that elderly woman who dreams about the pattern for the cedar floor mat. The dream comes from her grandmother, and as she weaves the mat she is visited by the ancestral spirits.

There’s a modern, humorous and legendary take on the tradition of the coastal First Nations where coppers were given away at a feast (or potlatch). In “A Slave and His Copper” a chief suspects his wife married him for his status. That is confirmed when he finds out she broke the copper and used it to cap her teeth. So that chief follows the tradition—and gives away that fragment of the copper.

The “Bracelet” combines all of Starr’s talents in the story of a first person Haisla character who teams up with a cousin from the Heiltsuk Nation (from Bella Bella) to plan an unpredictable feast, that would “shake up the coast and give potlatching a good jolt,” with a gathering for Two Spirited aboriginals who are quietly, secretly invited (with “fag hags” permitted to watch for the sidelines). The MCs are not the traditional aristocratic chiefs, the heymas. One is a popular Vancouver drag queen, Ms. L, the self appointed “matriarch of the Two Spirited Men in all of BC.” The money at the feast is the host’s residential school settlement, $50,000 in bills ranging from $5 to $50 specially printed by the mint with “inverted lavender triangles” in each corner and then distributed, as custom demands, to those guests who have contributed the most to the coastal Two Spirited community. Traditional coastal aboriginal dishes are served on environmentally correct seaweed cakes (much better than plastic dishes). The after feast entertainment comes from a band “The Two Spirited from Kitasoo” who come on stage in “killer whale headpieces and black button blankets” and perform the Blackfish Boogie in an “upbeat Techno Sound.” The potlatch is success, as Starr notes in closing, “It is a lesson that culture is always changing and evolving.”

The most moving story of the ten, “Spirit Returned,” is  the journey of a boy named Rock, who slowly, very slowly from age 12 to young manhood, is drawn into the drug scene, first as a user and later as a dealer. Finally when Rock can no longer find a vein to inject, he crashes, and then wakes and wonders into the bush, realizes that somewhere along the way, he has lost his spirit and a guide appears, a white raven, to help him to find that spirit.

Starr grew up in Kitamaat Village, taught at Nechako Elementary School in Kitimat, Iskut and at Bella Bella. He now lives in Nanaimo. He said he began working on the book three years ago when he lost his partner who died of cancer. Two near death experiences the following year pushed Starr to write.
Nuyem Weaver is a professional standard self published book, edited by a friend and with cover art by Diane Nelson, created with advice from (but not published by) Strong Nations,  a First Nations publisher based in Nanaimo.