IBM’s smarter planet ad campaign had been on television for sometime, with “ordinary” folks from around the world talking about smarter cities, smarter everything, to be answered by others saying “I’m an IBMer.”

While I am a CBCer and have worked for many years under the expanding C logo of  Mother Corp,  also known as the CBC Pizza (and sometimes less flattering terms).   The CBC for those who are unsure is th e Canadian Broadcasting Corporation.

It was only on this weekend the I noticed that the IBM ads appearing in The New Yorker has one smart idea that has a very close resemblance to the CBC pizza logo.Here’s the original multi-coloured design.

One interesting question is, if the ads began appearing in The New Yorker in September (the one above is from the Sept. 21 issue) how was IBM able to anticipate the colours in the CBC’s new look?  ( as seen in this photo gallery  of  behind the scenes images from the launch  by Toronto photographer Christopher Wahl.)

This is just the second recent example of a major brand borrowing from the CBC.  The Brand New blog reported on Oct. 12 that Stella Artois is also using a slices of the pizza in its ad campaign on the walls of the London Tube. 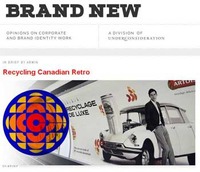 A couple points for the record.

Brand New points out that the CBC logo was created by Burton Kramer in 1974.  Original link is on the Canadian Design Resource site.

And here is the scan of the complete IBM smarter ad from Sept. 21 issue of The New Yorker. 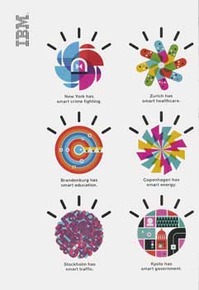