Archive For The “lens” Category

The adventures of the stellar jay fledglings 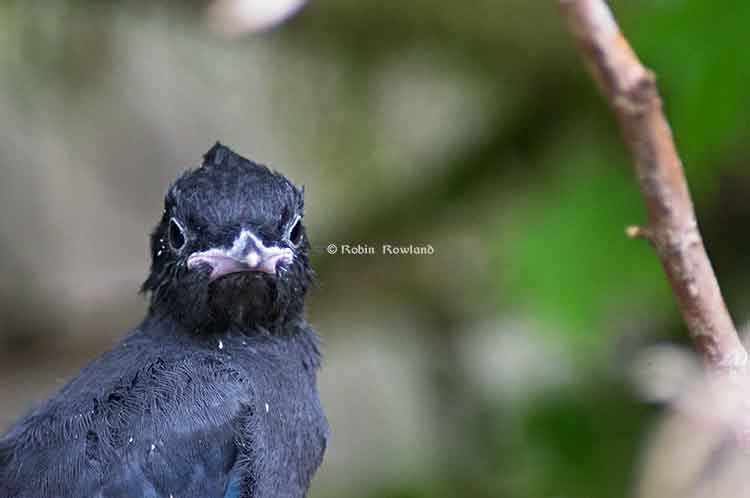 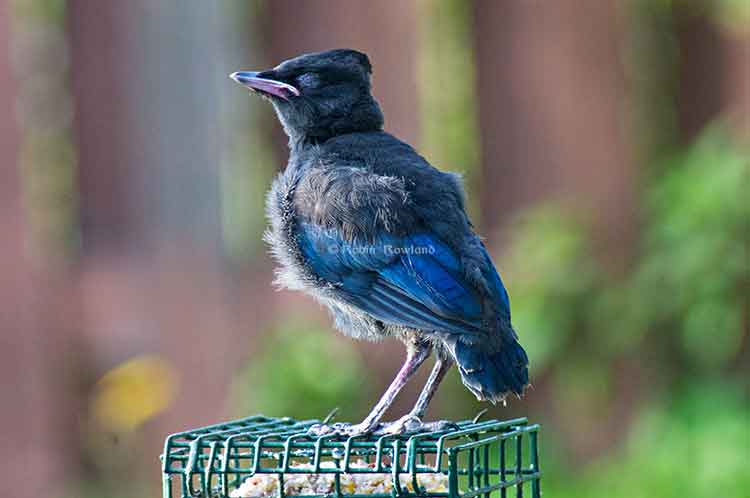 A stellar jay fledgling on the suet feeder on my desk. (Robin Rowland)

Early last Sunday morning I heard the thump of a bird hitting the glass door that leads out to my deck. I looked out and saw the bird stagger around the deck then take wing and land on the table on the deck. Birds do hit the door a few times a year and recover. So I went out as originally planned. (This photograph was taken later in the afternoon)

When I got back late in the afternoon….. 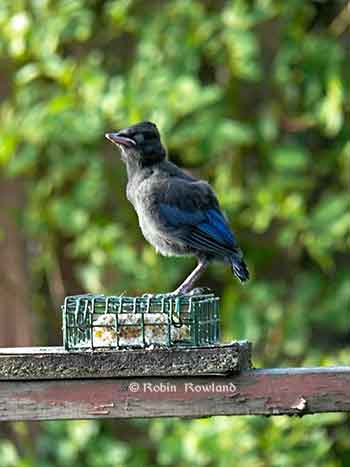 So when I returned, a stellar jay fledge was perched on the suet feeder. I stayed well back using my 300mm zoom lens.  For almost  20 minutes, the bird never moved. I was wondering it the bird was blind…. 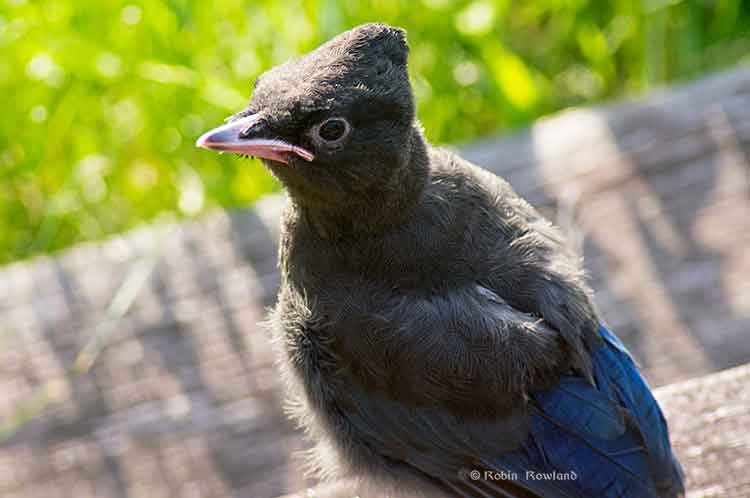 Then the fledge flew down to the deck and then hopped–not flying–down the steps. I came out on the deck, still keeping far away from the small bird. It looked at me, so clearly the fledge wasn’t blind, as it looked up. 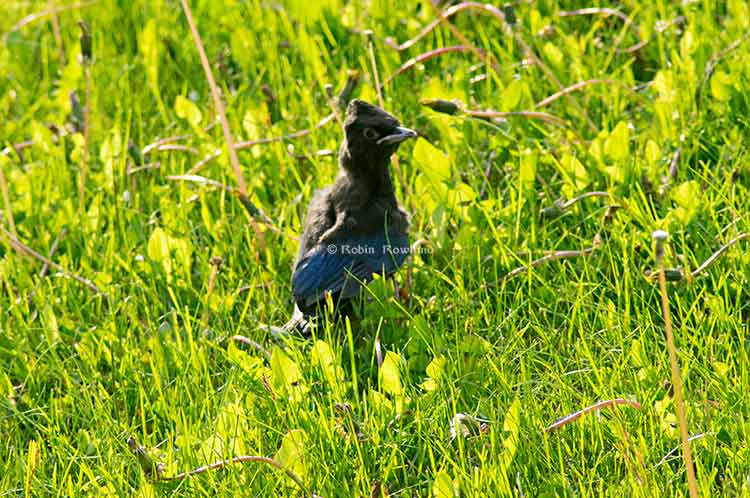 The fledge then hops into the grass of my backyard.  It hops all across the yard to the back fence (not pictured) then suddenly flies over to the fence on the east side of my yard. 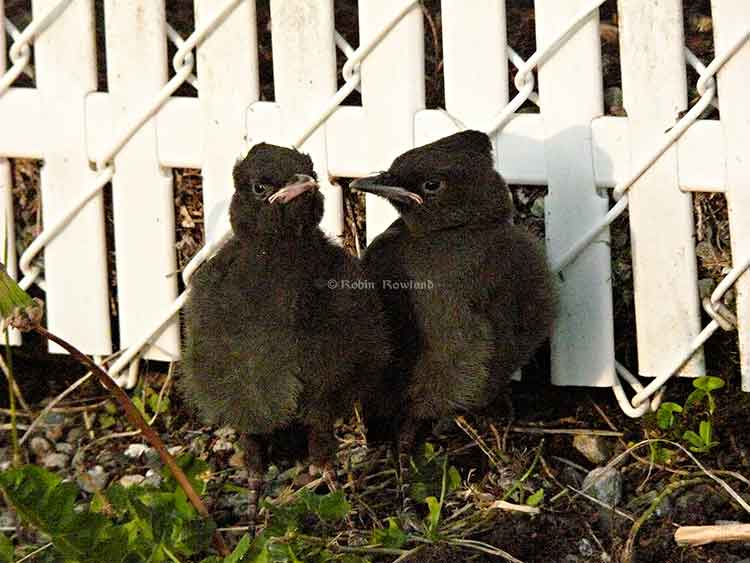 There was the fledge’s sibling huddled against the fence. 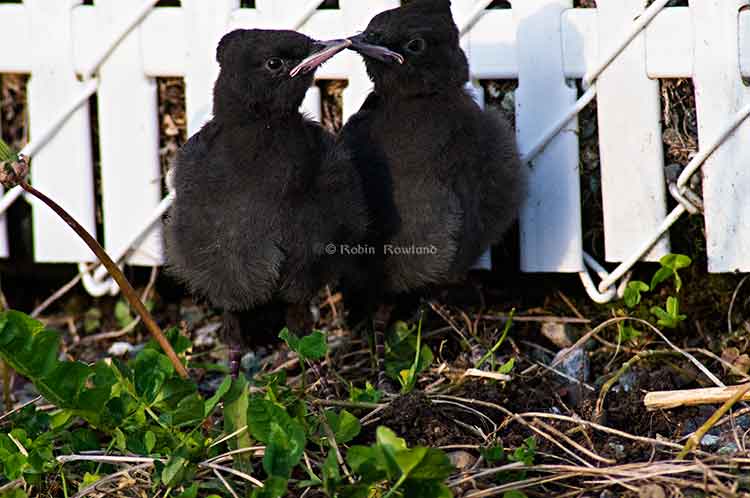 The two seemed to greet each other. 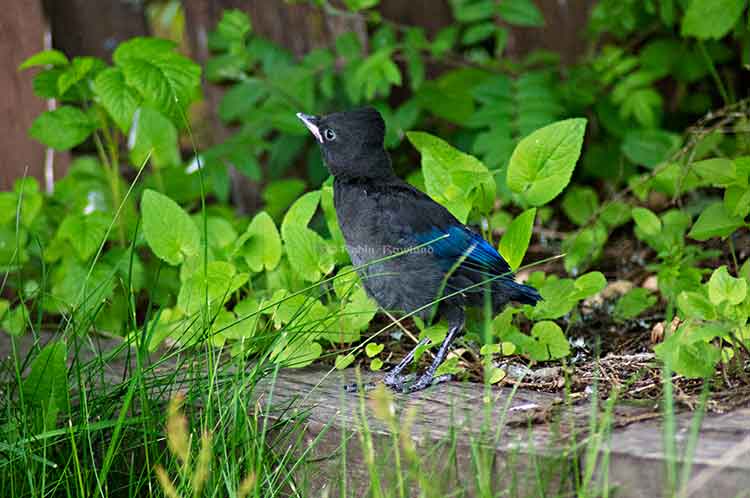 A while later, one of the fledges, walks toward the north fence of my hard. It looks up. 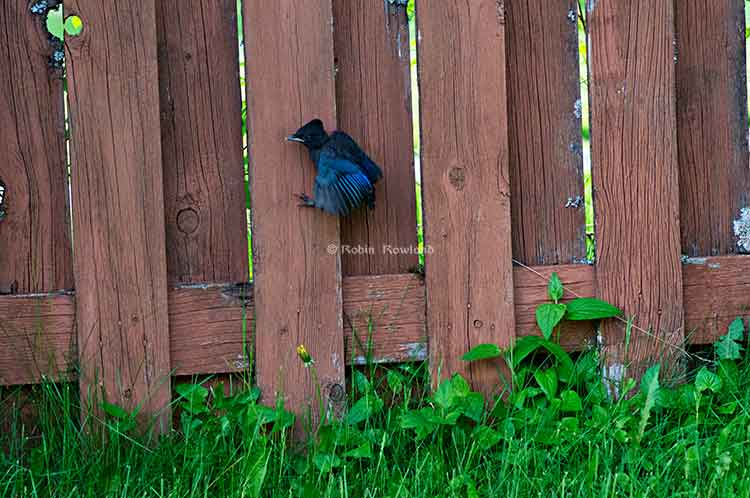 The young fledge tries to fly, but doesn’t make it. And grabs on to the fence with its feet. 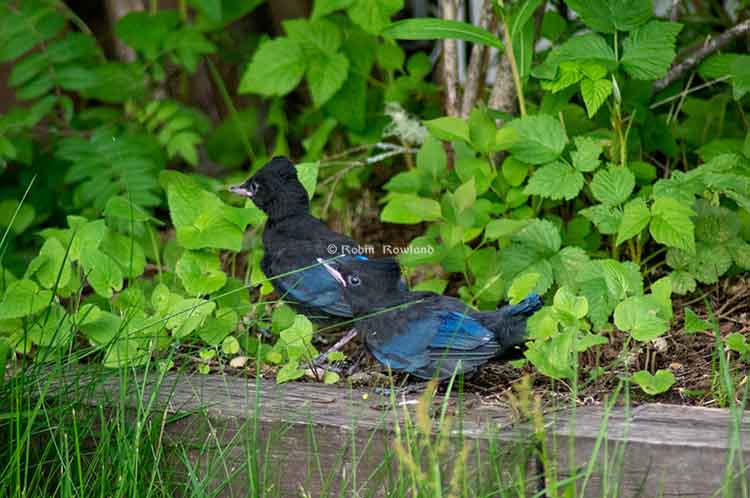 So the pair walk toward the fence. 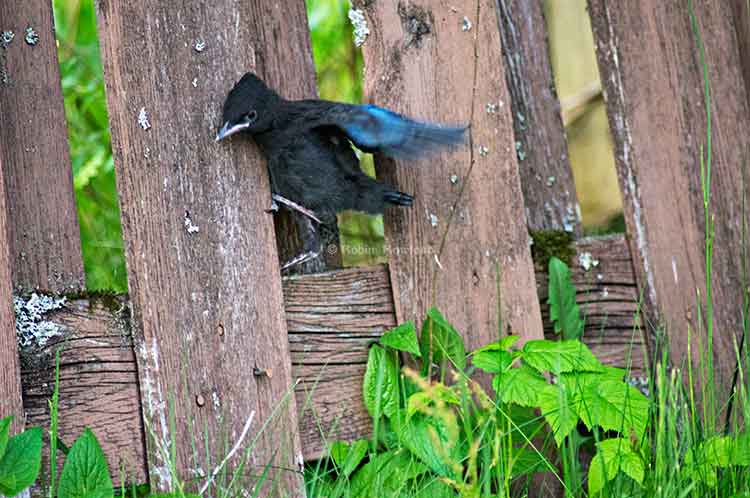 Again the fledge tries to fly over the fence. 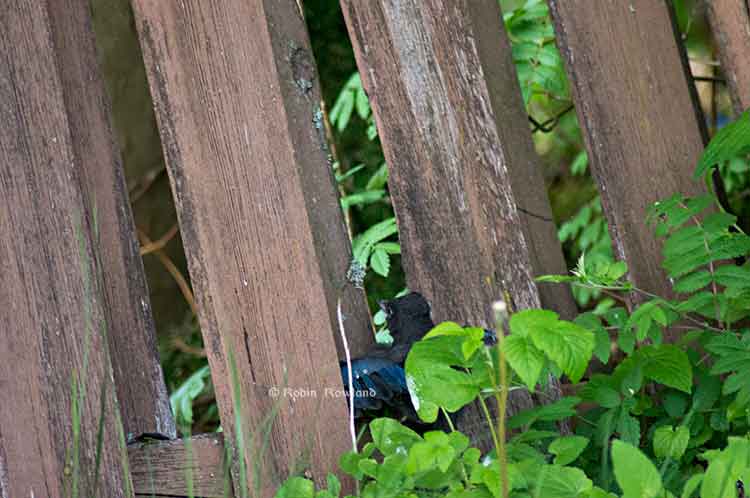 So the pair walk through the bottom of the fence and disappear from my yard.

I was worried that the young birds, apparently still not able to fly that far, would fall victim to the cats that roam the park behind my house and sometimes come into my yard.

Then two days later, on Tuesday, on  my morning walk I came across what I am pretty sure is the same pair, about a kilometre from my house, in a gap in a cedar hedge.

Here’s what I believe is the most adventurous of the pair looking out at me from the hedge. 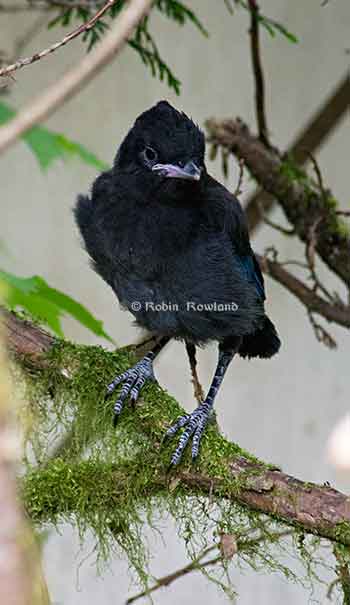 Here’s the second one, a little further back in the hedge. 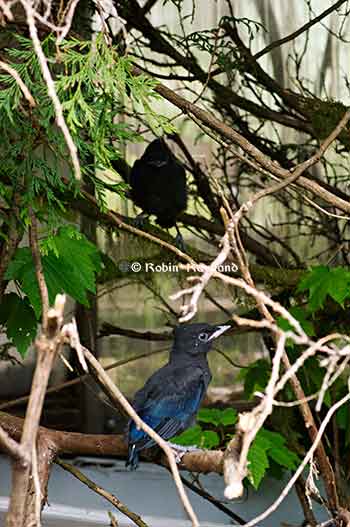 Haven’t seen them since, although I’ve been looking. I believe their parents are still around my yard, as a small resident family of stellar jays has been for years. So hopefully they’re either back with family or, since that hedge was close to the bush, they’ve found a new home in the forest. 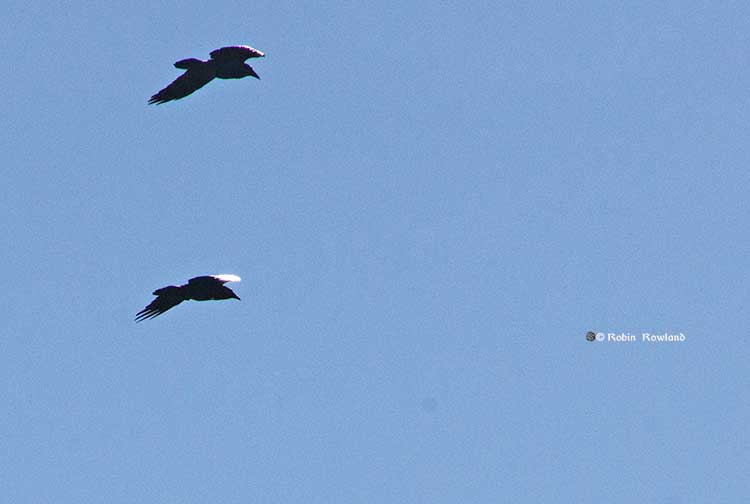 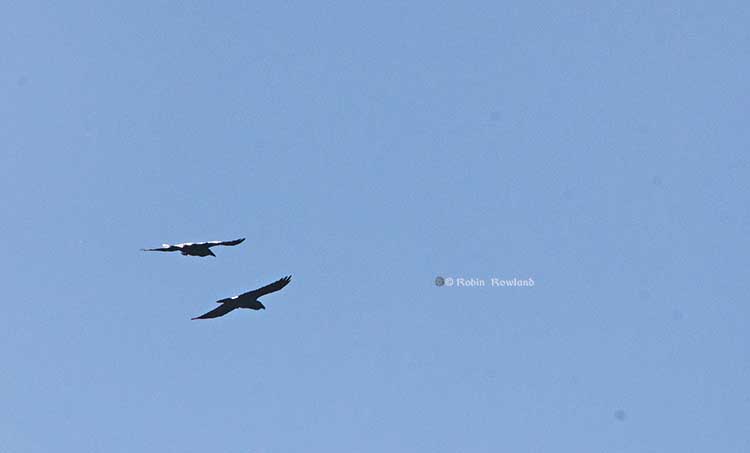 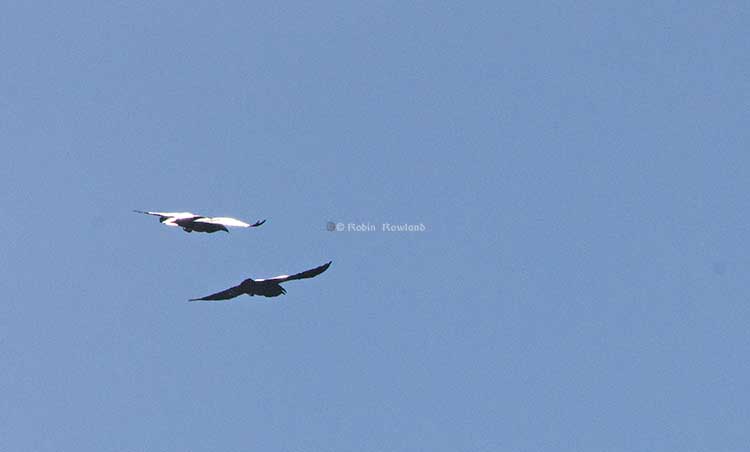 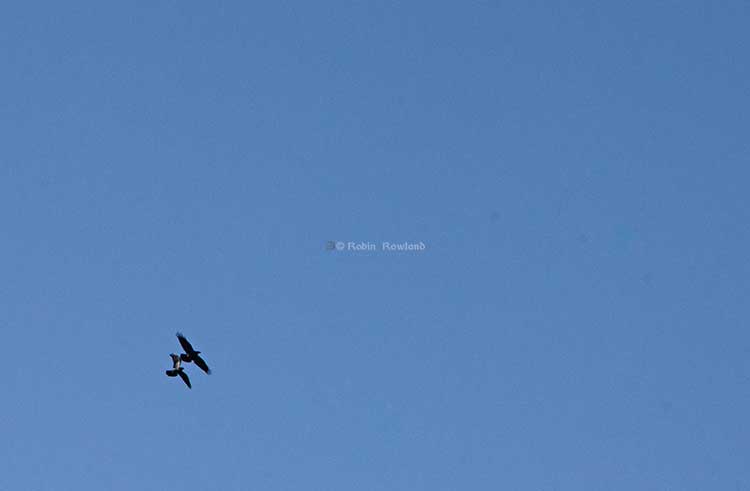 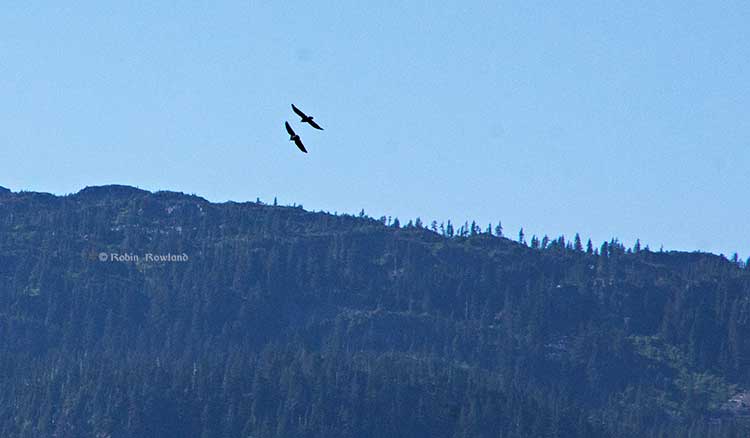 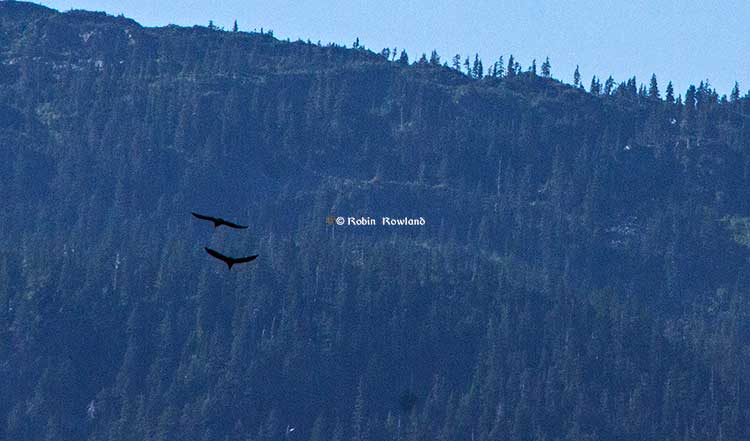