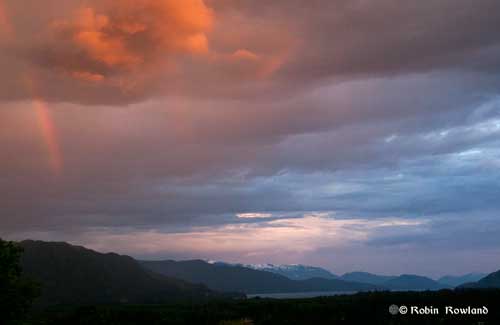 An hour ago I look out my front window.  A thunderstorm is approaching over the mountains to the east, the high clouds bright orange, lit by the setting summer sun to the west, and a rainbow is arching down from the clouds over the mountains that lead to Kitamaat Village. Grabbed the camera and ran to the park and this is the result.
July 12, 2011 Robin Rowland
oceanclouds , Douglas Channel , Kitamaat Village , Kitimat , Kitimat harbour , ocean , rain , storm , sunset