One of the at least three families of stellar jays that live in the cedar trees at my house is bolder and smarter than the rest.  Or maybe it’s a “point bird.”   If I go out with a bag of seeds to refill the feeder, there is the harsh call of the stellar jay and in a few moments,  the bird is close by (often on my deck) and watching me pour the seeds into the feeder. 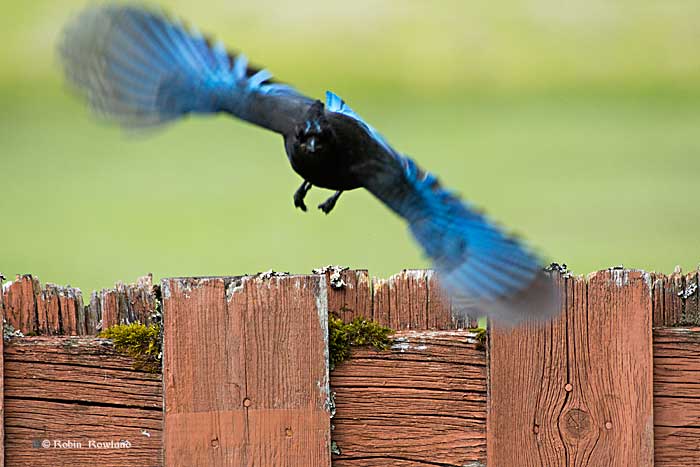 So a couple of days ago, the stellar jay was sitting  on my fence, watching, as I filled one feeder.  Went back in the house to get a different bag, for a second feeder.  Brought my camera along this time and caught the jay as it took off, heading right for me.  Bold or what? 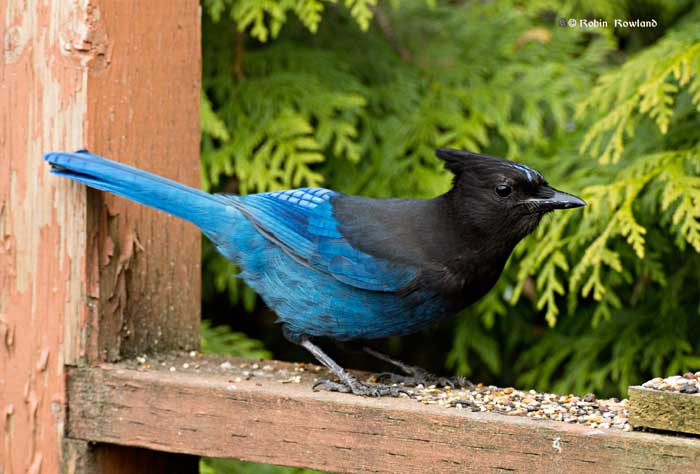 Here’s the stellar jay just a few seconds later on my deck. 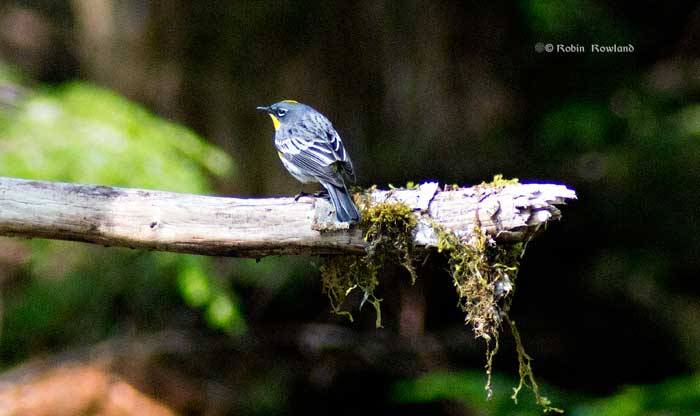 A yellow-rumped warbler, a “common migrant” along the BC coast, sits on a branch on the new trail to Maggie Point near Kitimat harbour.

Mallards flying over  the choppy ocean of Douglas Channel near Maggie Point. 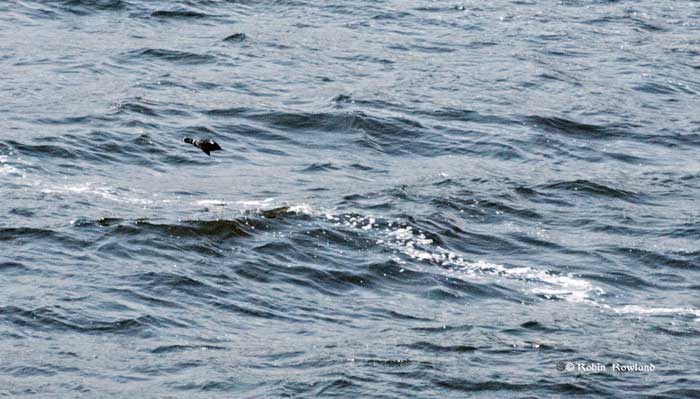 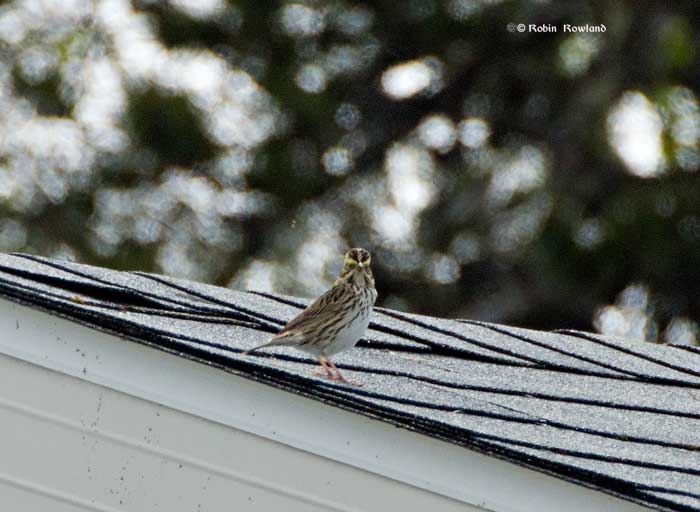 A Savannah Sparrow another “common migrant” along the BC coast, sits on my neighbor’s roof. 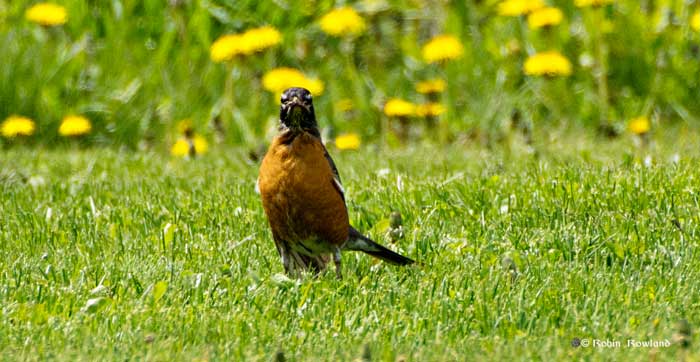 A robin checks out a Robin on my front lawn. 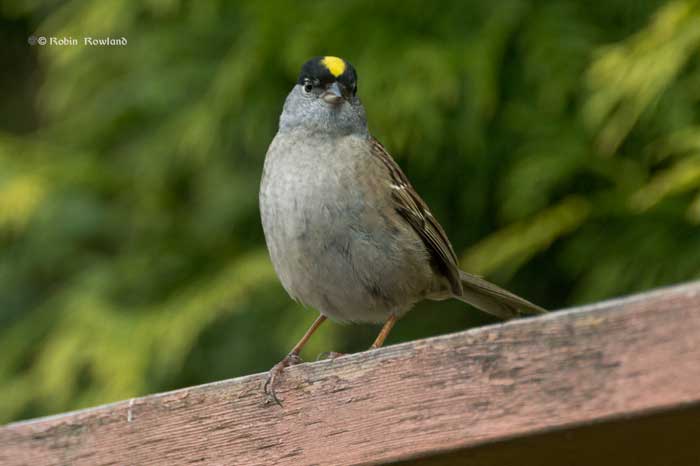 Golden-crowned sparrows are also regular lunch guests at my feeder. 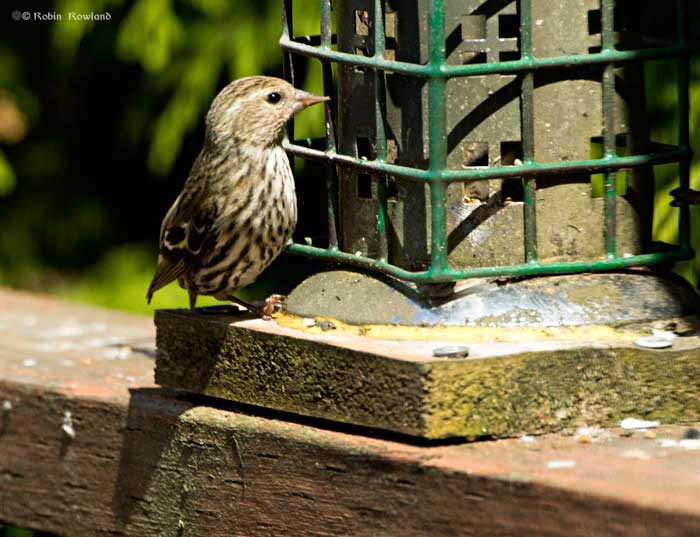 Not sure who this little guy is.  He was determined to get seeds and was good at finding the best spots in this feeder.

When I went out with the Kitimat Valley Naturalists, we went to special protected sites at Pine Creek, near Kitimat, to look for salamanders, part of a province-wide salamander count.  Taken with a macro lens, but not exactly the best light. Next time I go out I will bring a small reflector. 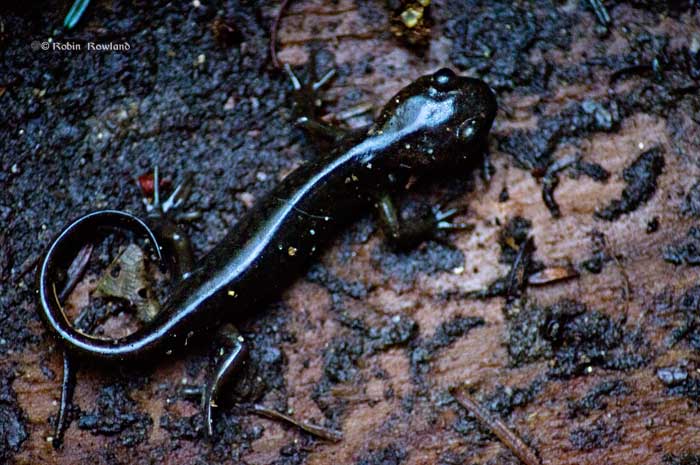 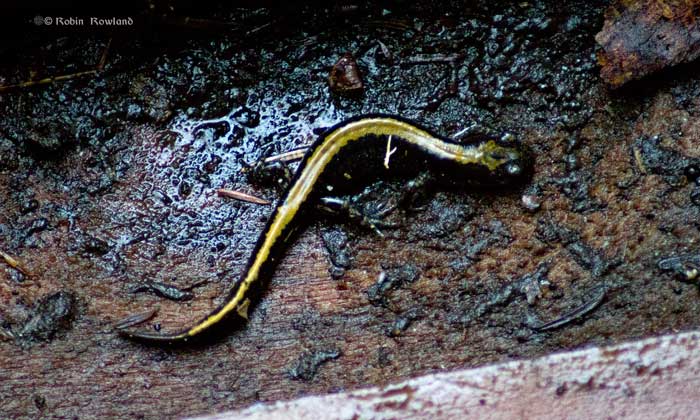 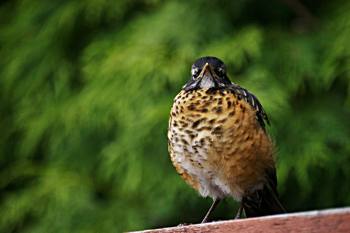 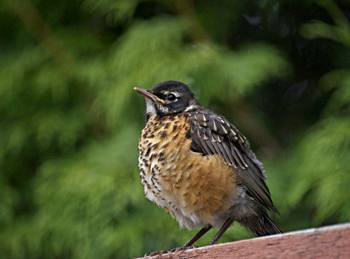 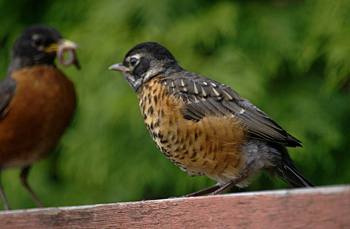 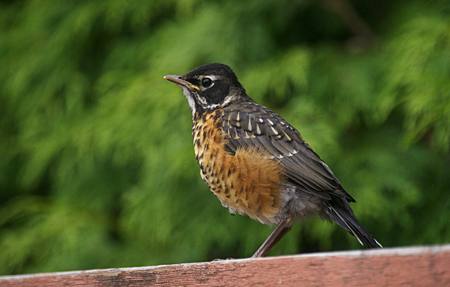 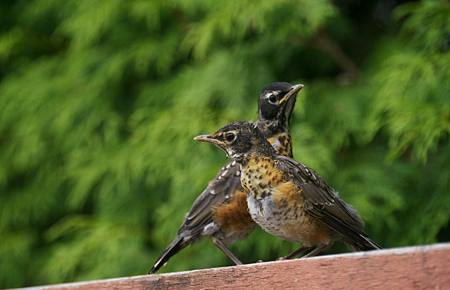 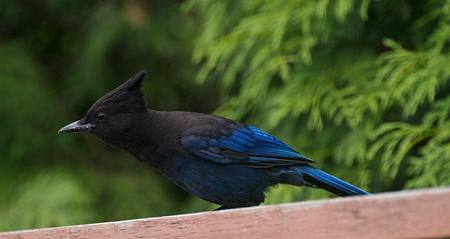 The Duck Pond birding site at the other Houston, Houston, BC

One of the reasons I decided to return to northwestern British Columbia is that this area is an untapped photographic paradise.

It’s not just the mountains, the forests and the seas, the variety of birds should be a draw for not just birders and photographers but all tourists.

This week I came across a small wetlands bird refuge, that as far as I can find out, is not listed on any birding guide to the province of British Columbia.  Of course, the big, brash Houston down in Texas may unknowingly be responsible, overshadowing the small town of the same name along the Yellowhead Highway in northwest British Columbia.

This week I drove from my base in Kitimat to Prince George, to see the premiere of the stage adaptation of Robert Sawyer’s novel, Rollback.  I also arranged some business meetings in Prince George and planned to do some location scouting for my planned photographic workshops on the way back. 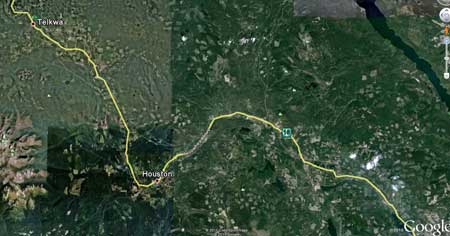 As a little kid, when my parents drove south to the Lower Mainlaind for vacation, it was a town we just drove through, between Smithers and Burns Lake.  My plans called for me to do the location scouting on the second day of my drive and since I wanted to take it fairly easy and stop in the afternoon of the first day, Houston was a convenient location. So I booked into a bed and breakfast called the Bear’s Claw Inn.  A  small guide to Houston I picked up earlier mentioned the local Duck Pond walking trail as a place to see birds right in the heart of town,

I settled into the B&B and my ears soon told me Houston is a place for birds, you could here the birds songs from the nearby Duck Pond. 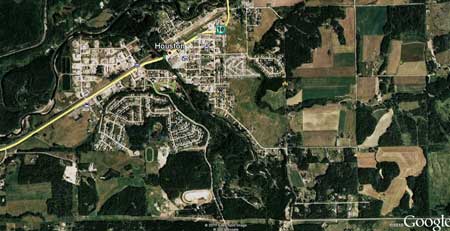 The Duck Pond is the grey brown circle in the green in the middle of town, just northeast of the high school running track.   As the sun set, Canada geese landed in the fields by my B&B (just to the west of the track).

The early morning was cloudy with drizzle. Got up anyway and by the time I had finished breakfast, the sun had broken through.   Took a side trail through the woods to the pond and was immediately rewarded when I came across some mule deer looking for food.  Spring always comes late in the high country of the BC interior and so food is scarce, the first green shoots are just starting.

I found the Duck Pond. The viewing platform is on the west side of the pond, so not the best location for morning shooting, but I was late enough, it was getting on for nine when I arrived, that the sun was shining, sidelighting, not back lighting, the northwest corner of the pond.  There are benches on the east side and at some clear spots, so there are number of shooting locations.

For this shoot, I didn’t have much time, just 90 minutes, before I had to get back on the road. It was a very rewarding 90 minutes, where I photographed Canada Geese, mallards, Barrow’s Goldeneye, Lincoln’s Sparrow, ravens, crows, my namesake bird, the robin and just as I was about to leave, this  Common Yellowthroat popped up among the reeds and marsh grass in the northwest corner of the pond, nicely let by that mid-morning sun. 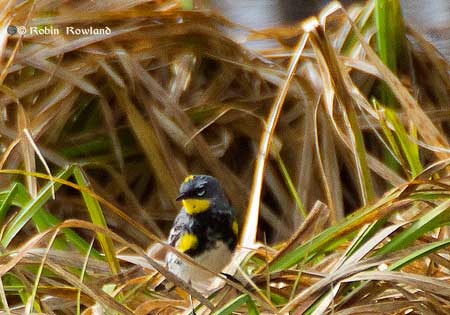 View the complete slideshow Birds of the Houston Duck Pond.

The guide promised, and this time I didn’t get, Common Goldeneye, Pintail and Blue-winged Teals, not to mention reptiles and amphibians (probably a little early for the latter)

So that just means, to quote an old phrase, “I’ll be back.”

I checked my BC birding books when I got home and found none of them mention Houston (and all are generally weak on the northwest in any case),  Future customers can be assured, the Houston Duck Pond will be one of the stops when I get my workshops up and running,