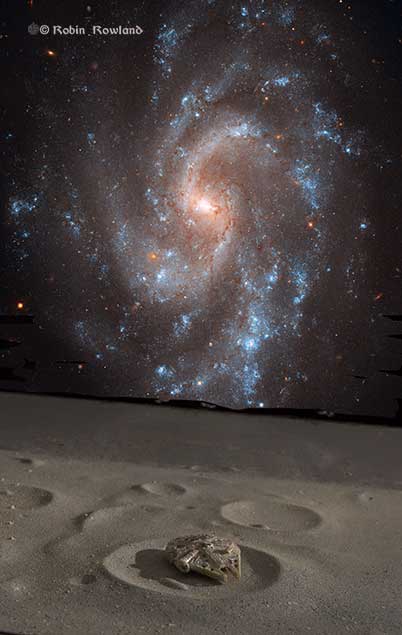 Once again the Millennium Falcon is on the run. Once again in this non-canon, non-legend Star Wars Micromachines diorama, the Falcon is trying to hide out in a crater on an unnamed, uncharted minor planet at the edge of that galaxy far far away, perhaps in the mysterious “Unknown Regions.”

Unfortunately for the Millennium Falcon crew and passengers, a bounty hunter comes up over the planetary horizon.

So what happens next? I’ll leave that to your imagination.

Creating the dioramas and photographs

Rebelscale.com lists the MicroMachines Millennium Falcon at 1/682 scale, the Slave 1 at 1/551 scale  and what Rebelscale calls the Imperial Star Destroyer (if it is the same as the Super Star Destroyer) at 1/23529 scale.

The problem with the Millenium Falcon MicoMachine is that the detailing is way out of scale, especially compared to some of the other models. Also the shiny “vinyl plastic” (according to Rebelscale) didn’t really work for the much loved but by now old and beat up Millennium Falcon.  The model was first painted with Krylon white primer,  then  lightly sprayed with Krylon Ivory Satin.  I added detailing using sharpie style art ink pens. I then sprayed with Krylon Matt finish.  Some of colours of those inks run when sprayed with the matt finish (especially reds).  After the matt finish had dried, details were touched up with the pens.

I left both the Slave 1 and the Super Star Destroyer as is.

The base is the Lunarscape vacu-form crater mold from  Amera Plastic Mouldings  from Low Prudhoe, Northumberland, in the UK.

The sheet of plastic was first covered with Krylon white primer.  Then I brush painted a thin grey wash with ordinary (not modeling) arcylic artists’ paint.   I then sprayed the surface with Krylon Fusion for Plastic white paint and Krylon Make it Stone textured grey paint, two handed, at the same time.   Finally I finished off with a quick pass of the Krylon Ivory Satin to give the surface some variety.  Serendipitously by that time the Ivory Satin can was almost empty and the spluttering spray left lumps of paint which became the surface rocks.

My work table is grey and some what dirty as you can see.  I pinned a black cloth on the wall in preparation for photography. The light for this image was daylight through a window to the left.

To take the photograph of the Millenium Falcon and the Super Star Destroyer the Star Destroyer model was on a platform (actually a pile of books) also covered in black cloth.  The main lighting for the shoot was an LED video light high on an extended light stand at the door to my workroom. For this shot the overhead light was also on.

All closeup images were taken with a Sony Alpha 77 and a Sony 100mm prime macro lens.

I wanted imaginative backgrounds, like the covers of 50s-70s science fiction paperbacks, so I choose public domain shots from NASA.

The barred spiral galaxy NGC 6217 was photographed on June 13 and July 8, 2009, as part of the initial testing and calibration of Hubble’s ACS. The galaxy lies 60 million light-years away in the north circumpolar constellation Ursa Major. 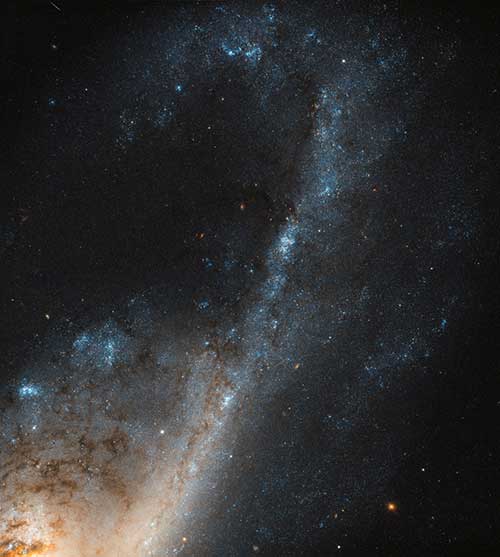 The NGC 4536 galaxy, captured here in beautiful detail by the Hubble’s Wide Field Camera 3 (WFC3). Located roughly 50 million light-years away in the constellation of Virgo (The Virgin), it is a hub of extreme star formation. Released April 14, 2017  ESA/Hubble & NASA 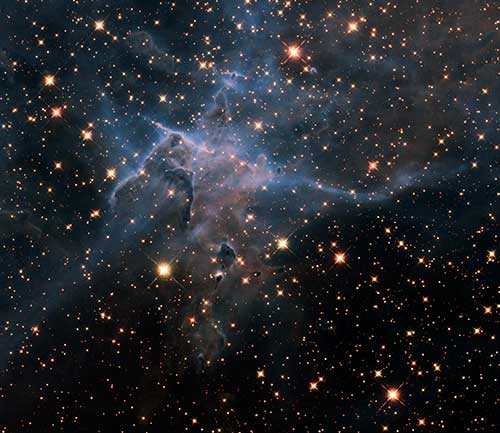 HH 901 and HH 902 in the Carina Nebula Star-forming Pillars and Herbig-Haro Objects with Jets  Taken in 2010 by the Hubble the region is two light years across and 7,500 light-years away from Earth. ESA/NASA

For both the Slave 1 and the Super Star Destroyer,  the NASA image was added in a new layer, then the eraser tool was used to reveal the spacecraft which were lighted the same way as the Millennium Falcon on the surface.

The “line” between the Lunarscape craters and the work table was blended using a combination the blur tool, the clone tool and the healing brush tool.

One thought on “The hunt for the Millennium Falcon – the diorama”