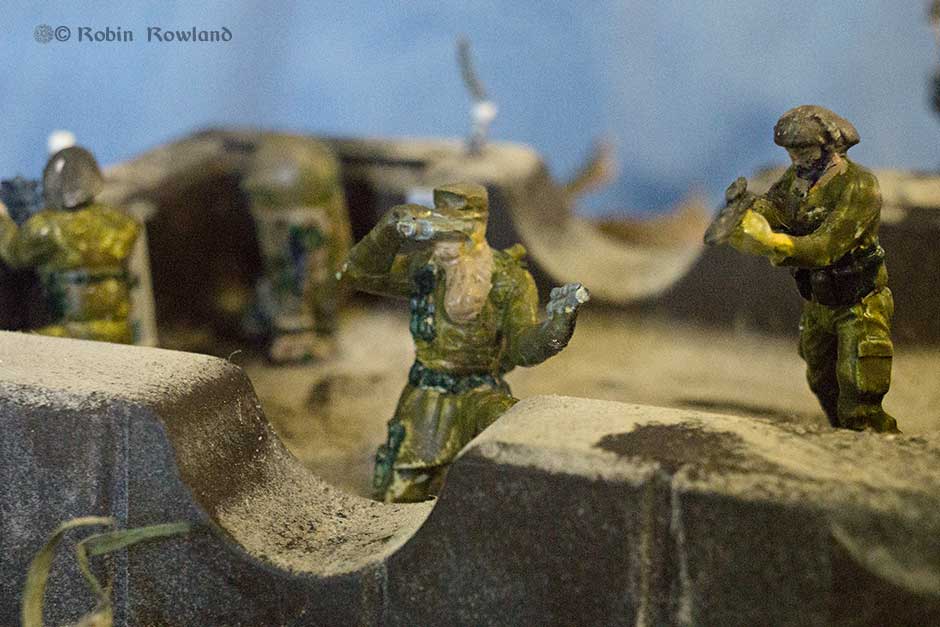 I began recreating science fiction models about two years ago for a couple of reasons. One I wanted a creative outlet that was somewhat separate from my career as a photographer, journalist and writer. That’s so I could relax and have fun. Second, as a kid in the 1960s inspired by Star Trek, the Original Series, I had built the kits and scratch built my own models and now that I’m retired I wanted to start again. 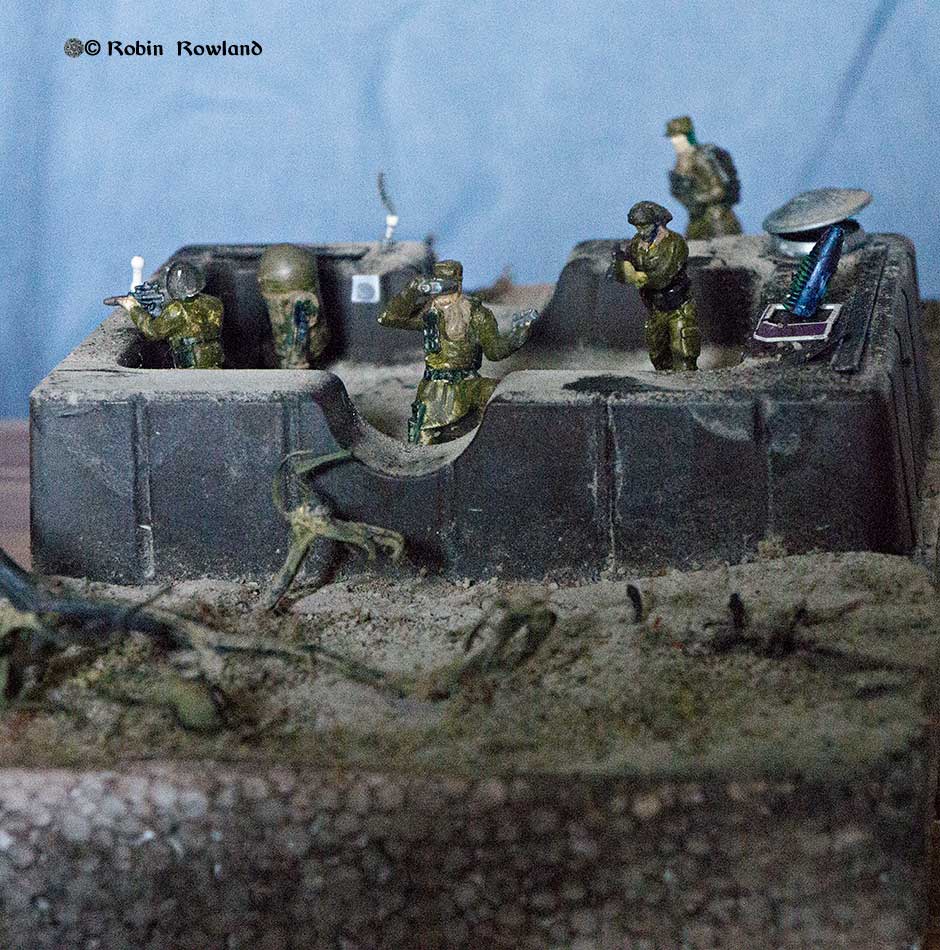 I began following various modellers and toy photographers on Instagram and came across the amazing work by Matthew Callaghan, a U.S. Marine photographer who also has a hobby of recreating scenes he is familiar with using the larger size Star Wars figures in photographs that simulated the reality of combat in Iraq.

Callaghan’s work immediately struck a chord, and not just because I am working on my own Star Wars model projects. From September 2003 until I retired in March 2010, I was the photo editor for CBC News, based in Toronto. That meant as soon as I got into work and for the rest of each day, I would see the photo feeds coming out of Iraq and Afghanistan from the Canadian Press, the Associated Press, Reuters, Getty/AFP and Canadian Forces Combat Camera.

I worked closely with CBC reporters, producers and technicians based in Kandahar, many of whom would be filing their photos back to me in Toronto. Finbarr O’Reilly who was embedded with both the Canadian and US Forces, including the Marines, was once one of my students at Ryerson University School of Journalism. He is co-author of Chasing Ghosts  along with former Marine Thomas Brennan.

At CBC, as editor, I worked on an Afghanistan project with photographer Louie Palu who was also embedded with both the Canadians and Americans in Afghanistan and is known for his portraits of Marines and is author of the new book Front Toward The Enemy.

I had just started working on my Star Wars camouflage project and was looking for an idea for doing some kind of similar combat simulation , inspired by Callaghan’s gritty and realistic photos of the Storm Troopers

I work with Star Wars Command figures which are much smaller than the larger figures most photographers work with. I noticed one of the rebel fighters from Hoth with a pair of galactic binoculars and that gave me the idea of recreating, in Star Wars terms, one story of my father in the Second World War, when he was a British artillery officer in Malaya, fighting the Japanese.

The battle was at Kampar . My father’s 88th Field Regiment of the Royal Artillery was defending the outer British perimeter.

Major General Archie Paris (temporary commander of the 11th Indian Division) had to defend a line from the coast through Telok Anson (now Telok Intan) up to the defensive positions at Kampar. The defensive perimeter at Kampar was an all round position, straddling Kampar Hill (Gunong Brijang Malaka) to the east of Kampar town, overlooking the Japanese advance and well concealed by thick jungle. Paris placed artillery spotters on the forward slopes protected by the 15th/6th Brigade on the western side of the position, and the 28th Gurkha Brigade covered the right flank on the eastern side.[2] The two brigades were supported by the 88th Field Artillery Regiment, which was equipped with 25 pounders, and the 4.5 inch howitzers of the 155th Field Artillery Regiment. Once the 12th Brigade had passed through Kampar Paris sent them to cover the coast and his line of retreat at Telok Anson.

My father, Lt. Frederic Rowland, was one of those artillery spotters. For his actions that day he was awarded the Military Cross. 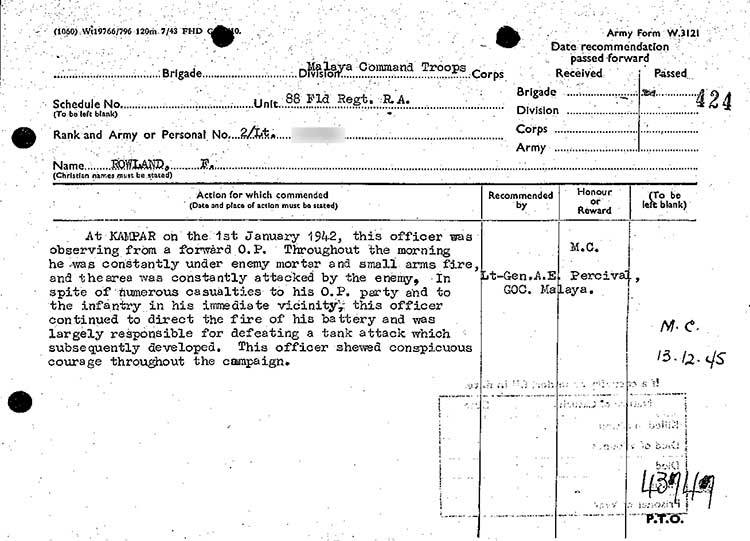 What the citation doesn’t say was that my father was in a spotter dugout along with two “other ranks” connected to the artillery headquarters with a field telephone. At one point a mortar round landed right in the dugout. The two men with my father were killed instantly but in the random nature of the universe, my father had barely a scratch, although he would tell me that most of his uniform was blown off. He had to crawl out of the dug out to re-splice the severed telephone wire and then crawled back into the dug out to call in the artillery on the advancing Japanese tanks. 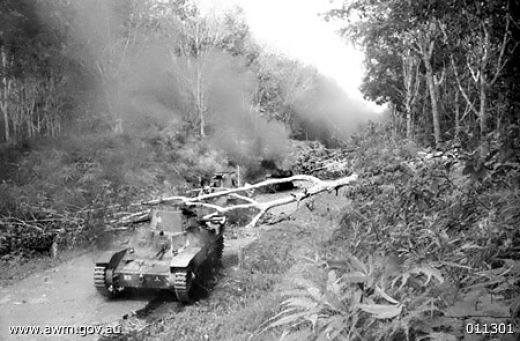 Later as a prisoner of war in Changi Jail, Singapore, he commissioned the war artist Leo Rawlings, who later became famous of his drawings and paintings of POWs  to recreate the action at Kampar. Here is a detail of that painting. The two spotter positions, black box, are suggested with just a couple of strokes of a water colour brush.

Star Wars in camo I. If you were a Storm Trooper wouldn’t you want some camouflage?

The first step was to paint the Hoth rebel figures not in winter white but in the Second World War British uniform colour (somewhat) from Vallejo paints, with a couple of appropriate adjustments. 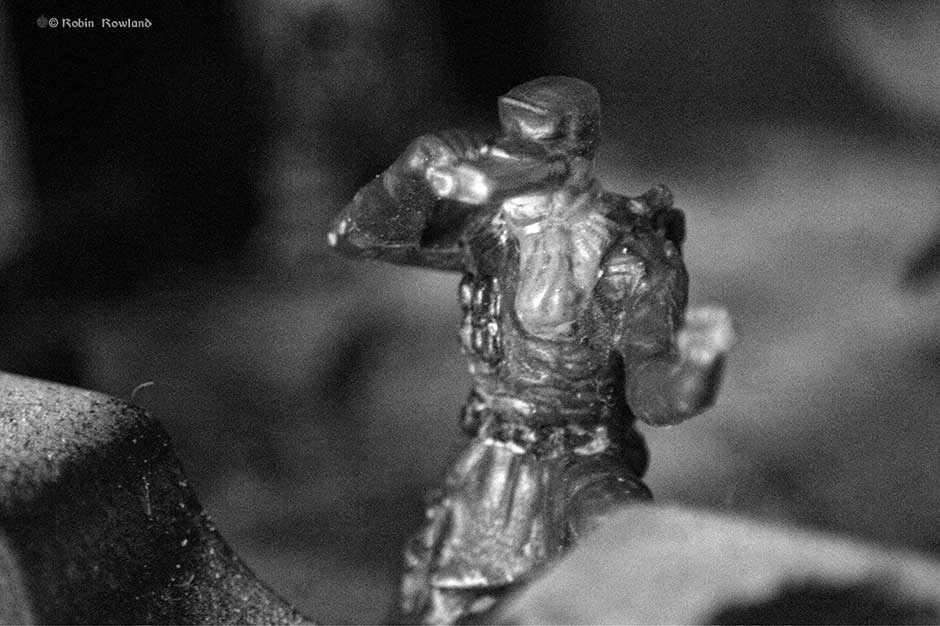 Here’s a close up of the spotter officer, the forward observation post commander, as he might appear in a WWII photo, using the Kodak Tri-X filter from Perfect Effects.

A contemporary digital image of the  spotter officer and his two men with an R2 unit in the background. 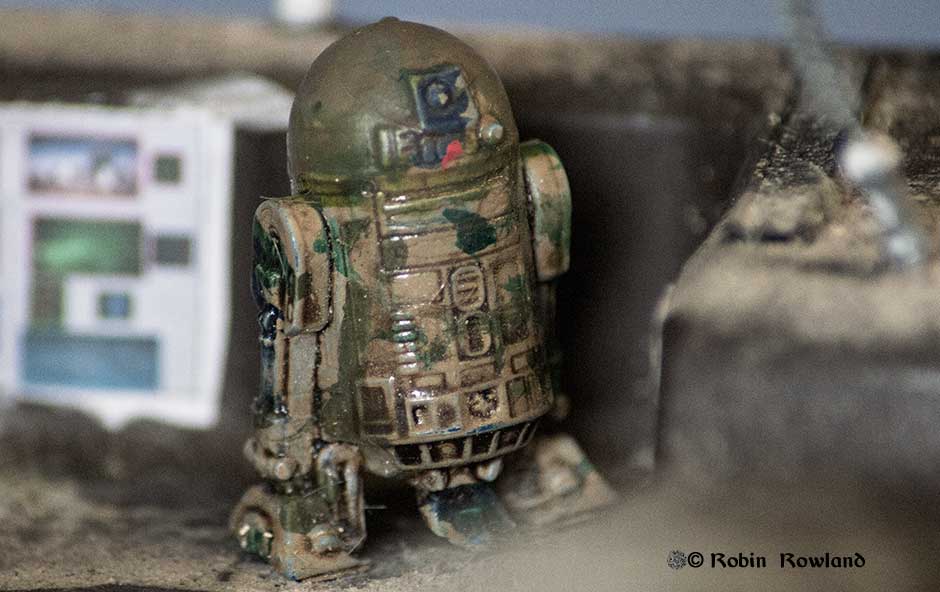 Of course, I added  an R2 unit, which I call R2C1 (C for camouflage model) plus one other soldier, a reinforcement. 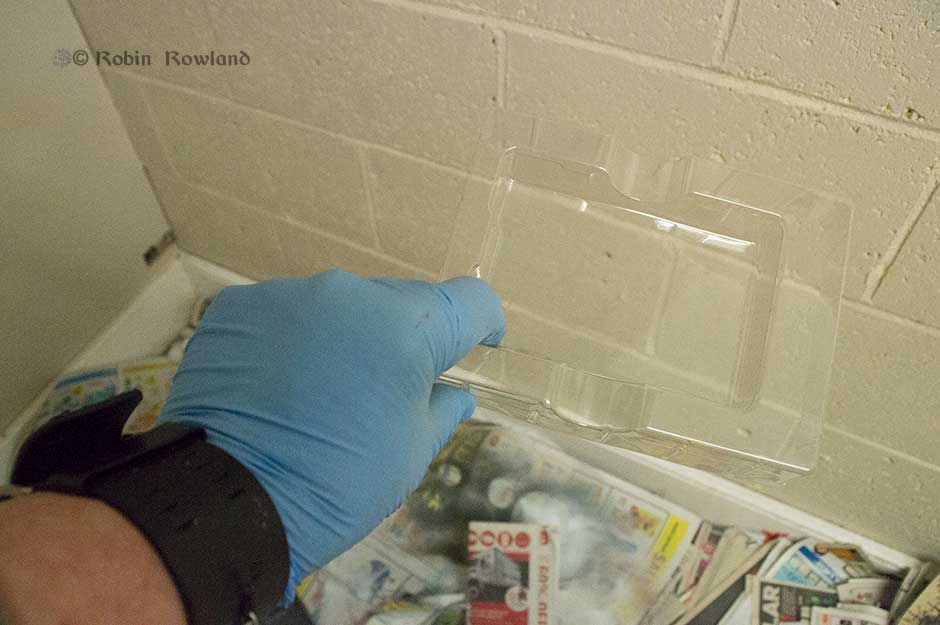 So I started, as with some other projects, with a clear blister pack provided an idea for a futuristic popup but portable armoured forward observation post, complete with all kinds of high tech communications gear. 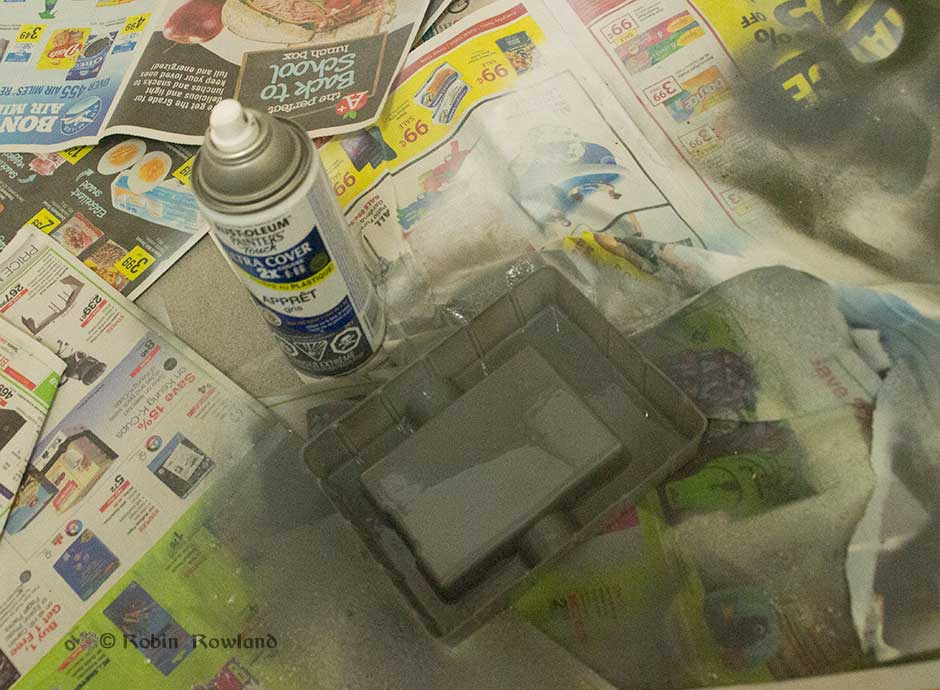 Then I added a coat of grey auto primer on both sides. 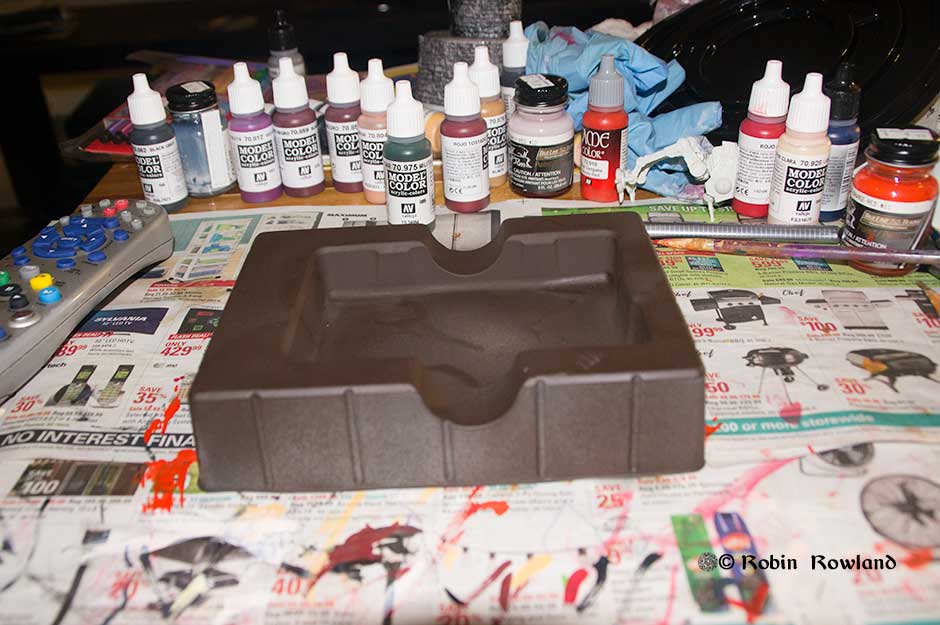 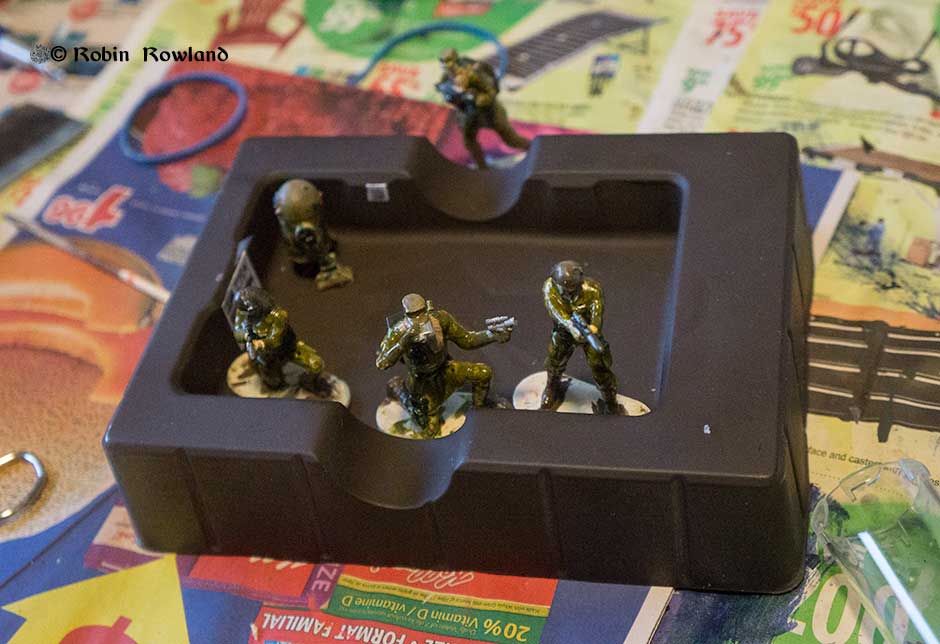 Then I found the right position for the figures.

I created the com panel using the web and reduced the images using Photoshop, then reduced the entire image even further to fit on to a square on the inside of the original blister pack.

You can see that AT-STs are approaching just like Japanese tanks were attacking my father’s FOP.  Given the tech of the galaxy far, far away they are in communication with rebel headquarters and have multiple sensors, rather than binoculars and a field telephone connected by a wire. And yes the multi coloured buttons on the panel are from the Star Trek Original Series bridge <grin>. 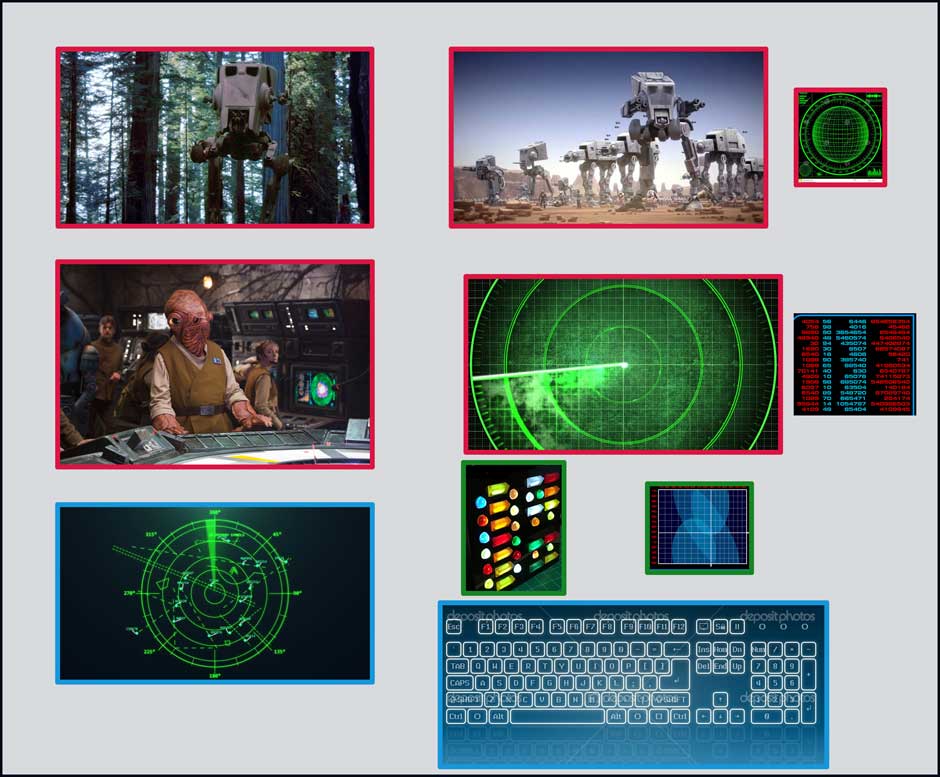 The R2 access panel was created the same way. 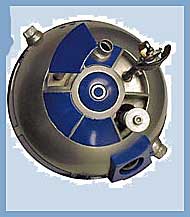 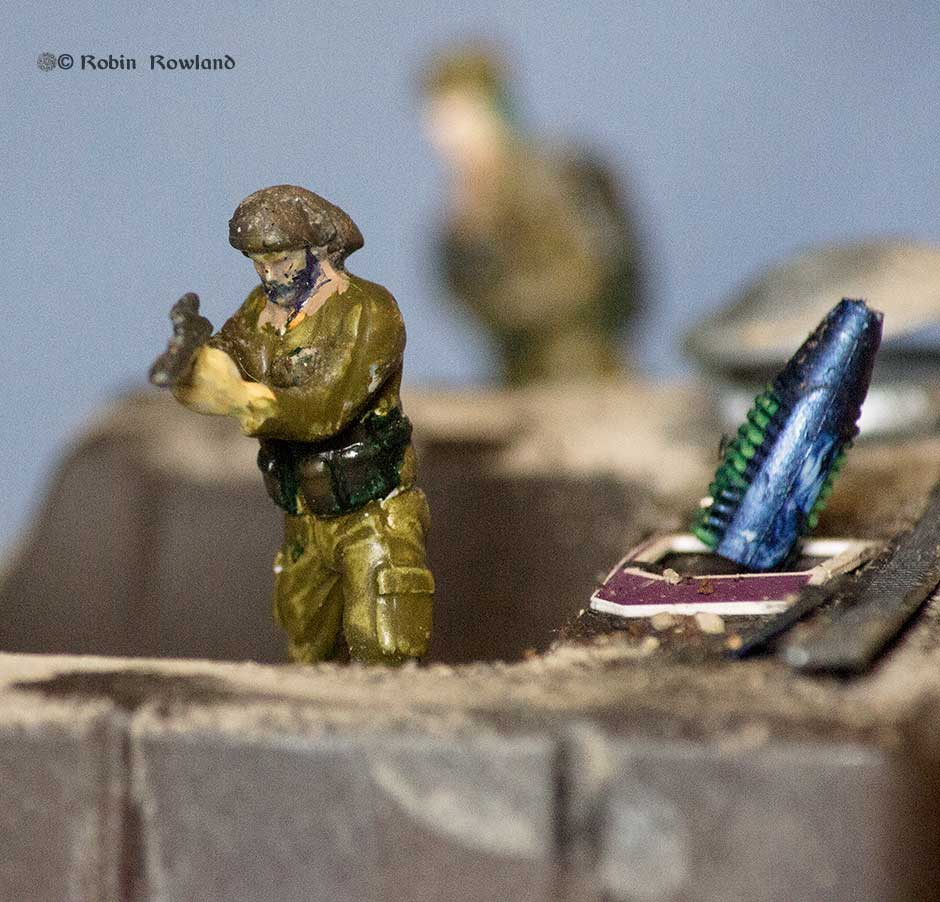 Combat is never found in a clean environment. So I wanted to dirty up the scene. The fallen trees are from hothouse tomatoes, painted black as if they’d been scorched. I laid down a layer of standard ground cover, including some grass. Then it was all covered up with a mixture of about one third ashes from my barbecue, one third talcum powder, and one third a mixture of fine model railway ballast and fine rubble. 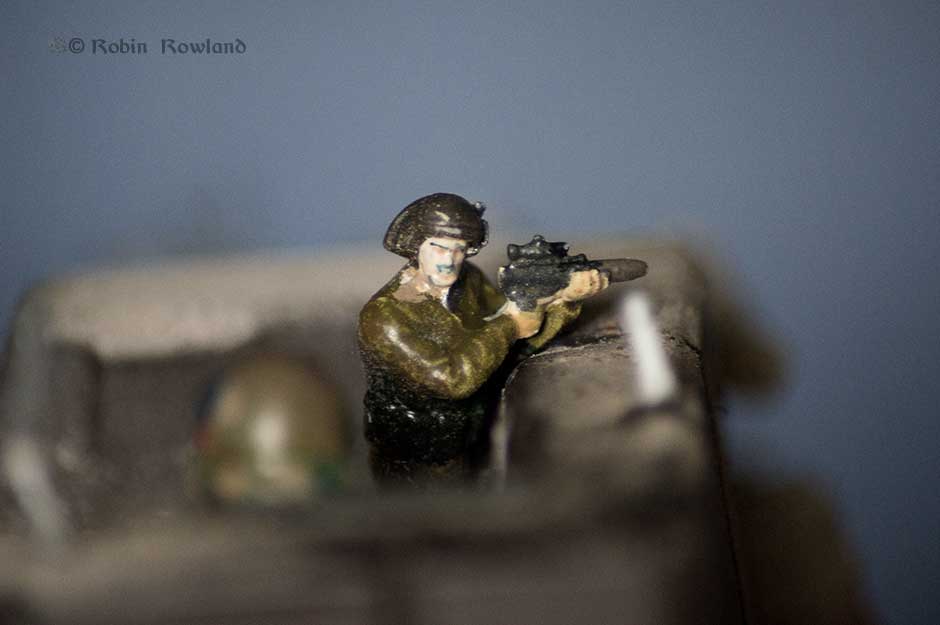 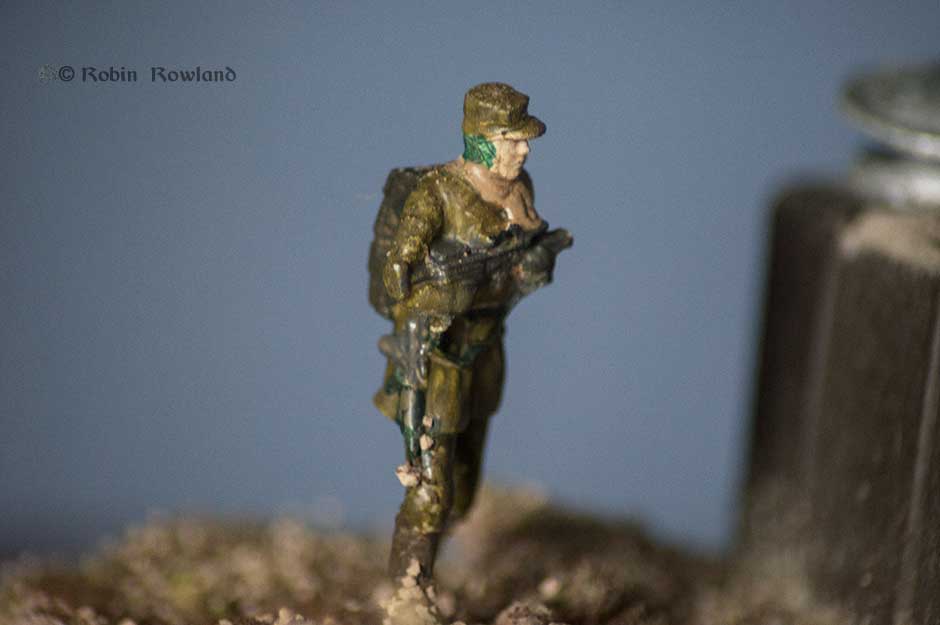 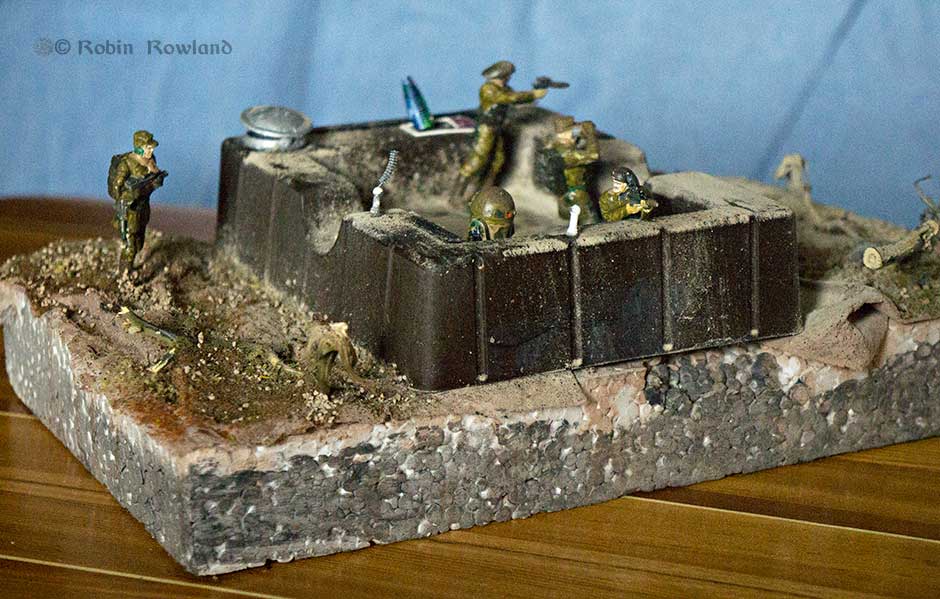 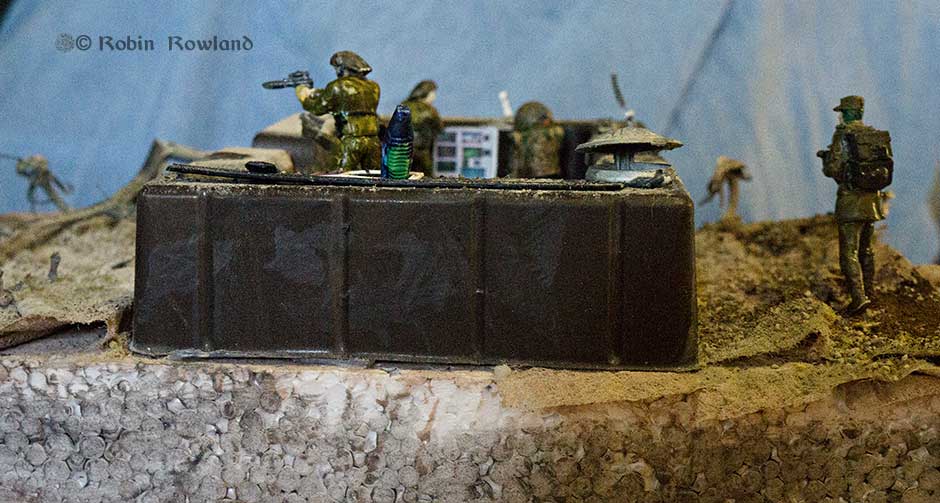 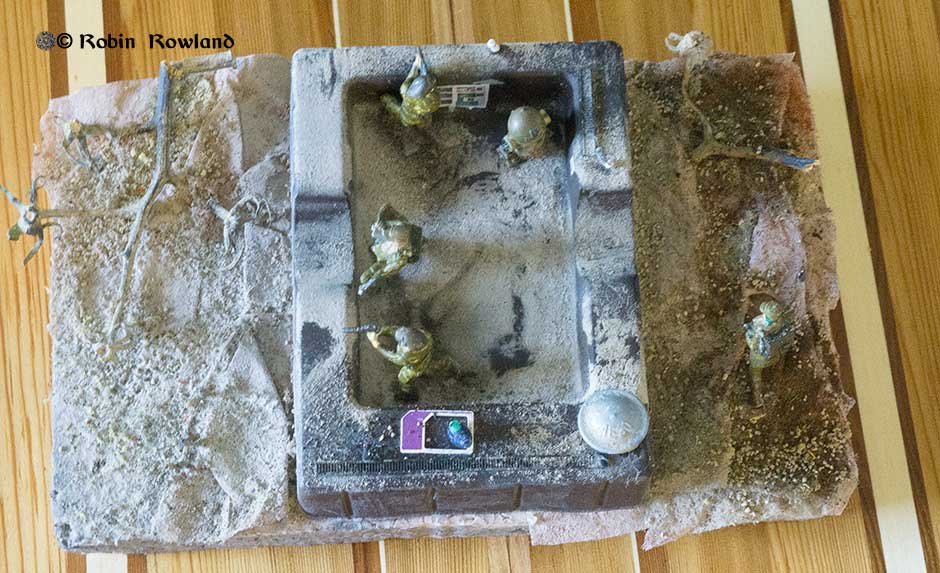 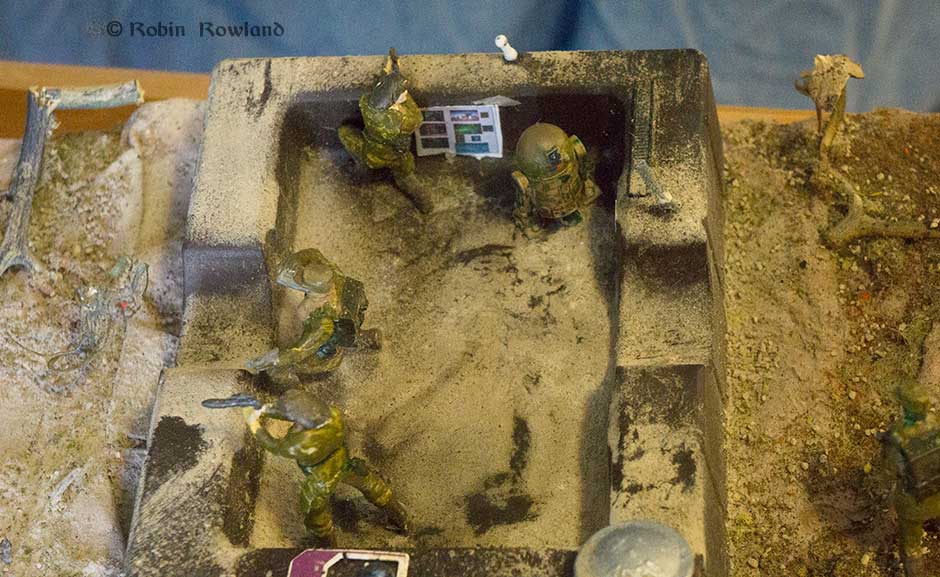 As well as the standard photographs, I wanted to duplicate a Second World War look with black and white and some old style photographs plus two water colours, one where I tried to duplicate the limited colours available to Leo Rawlings as well as the kind of quick watercolour painter that was common in that era. 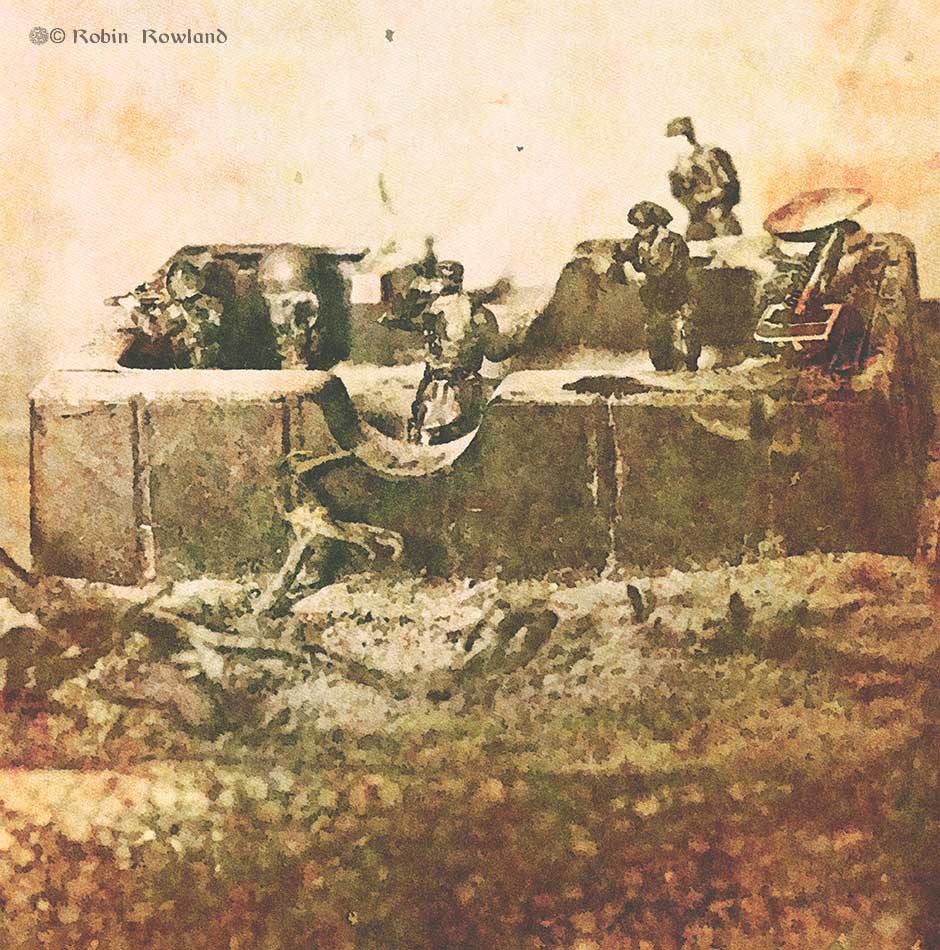 To duplicate the Rawlings watercolour from the image, I first used the charcoal and chalk filter in Photoshop, then added a sepia photo filter. Next I duplicated that layer and used the Jixipix watercolour filter. It was a bit bright, so I used the lighten tool under the Photoshop saturation adjustment, then adjusted opacity to bring out more of the chalk and charcoal layer. 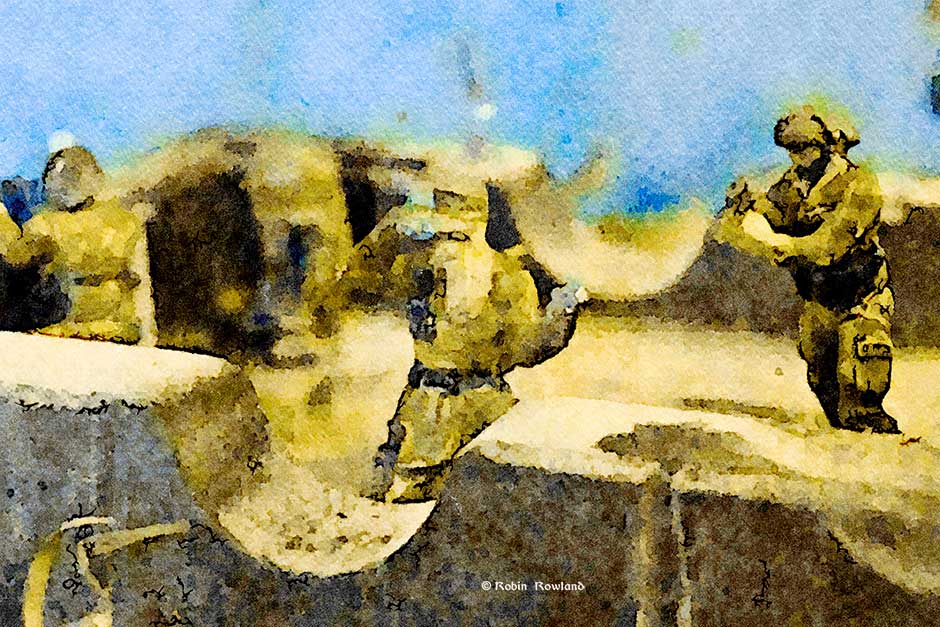 This follows the style of the “quick sketch’ watercolour used by some war artists from the Napoleonic era to the Second World War and probably even today. Created using the Jixipix water colour filter. 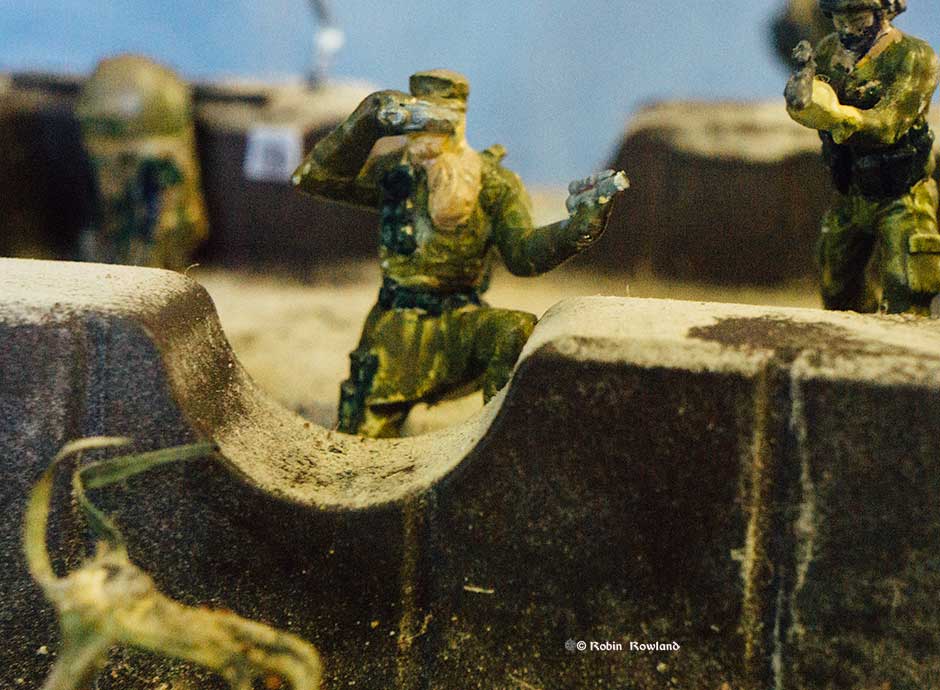 The front of the forward observation post as it might have been captured on old Kodak film, using a VSOC Lightroom plugin. 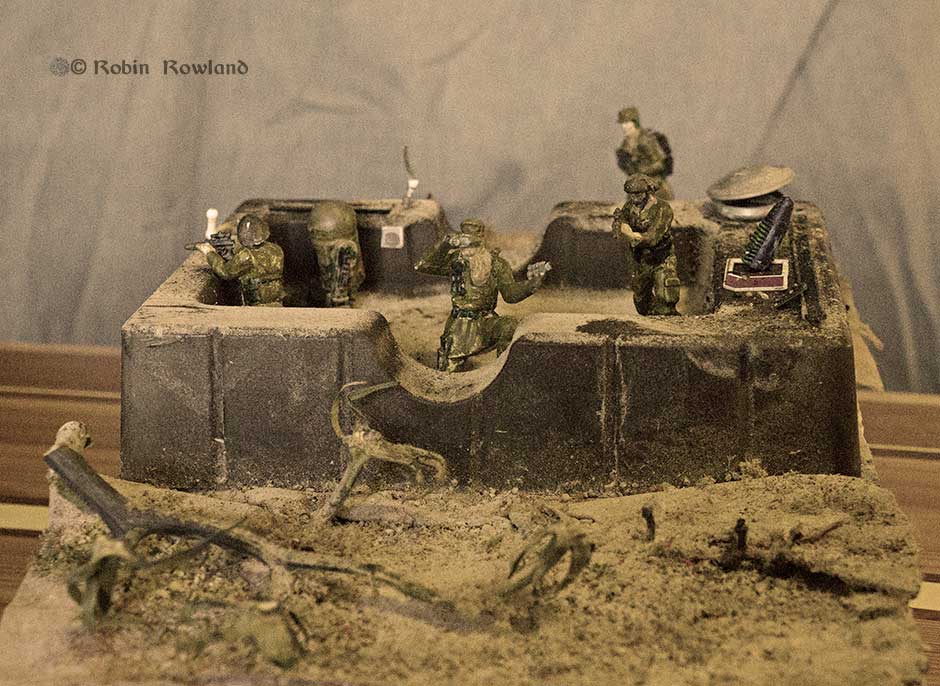 Another view that duplicates a faded colour photo from the era, no filters, desaturation in Photoshop. 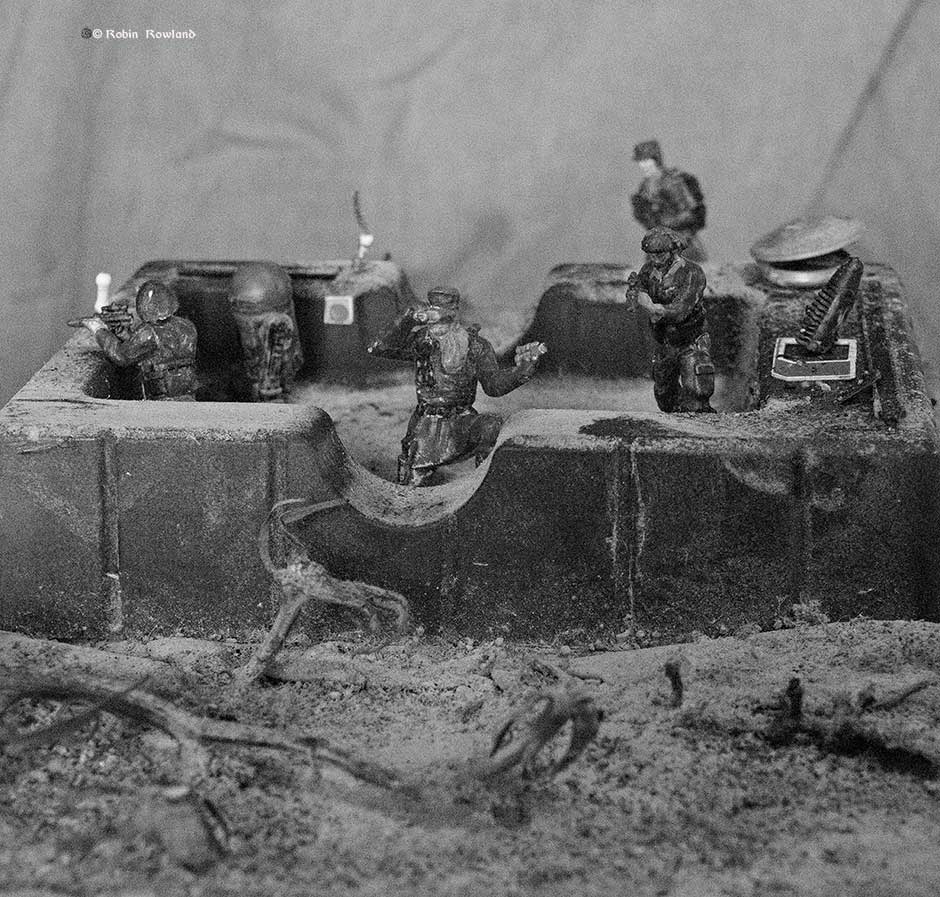 And a couple of gritty black and white images.

2 thoughts on “Star Wars in camo II. A forward observation post on the front line”