The Ottawa protestors are partying on the 80th anniversary of a real crime against humanity the sook ching massacre in Singapore.

(Warning: This post may be triggering to people or their families who were victims of real crimes against humanity. I didn’t want to raise the temperature of the  Ottawa protest debate but the continuation of the blockades and remembering the anniversary date compelled me to write this). 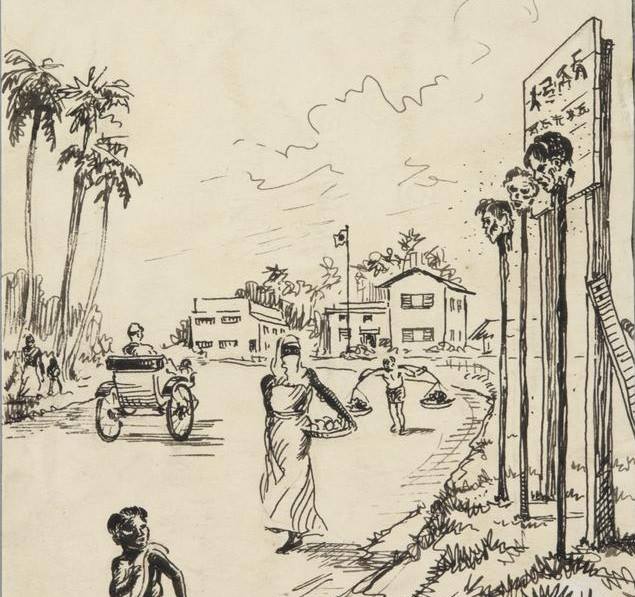 The heads of Chinese men on poles after the sook ching massacre in Singapore. Sketch by Leo Rawlings.

The so-called freedom convoy protestors on the streets of Ottawa who are barbecuing pigs on spits and lounging in hot tubs, playing in a bouncy castle, claiming that getting a vaccine or wearing a mask in a pandemic is a crime against humanity have no idea that this the 80th anniversary of a real war crime.

On February 14, 1942, in the Second World War, Singapore surrendered to the Imperial Japanese Army. Thousands of British, Australian and Indian Army soldiers became prisoners of war, including my father, who was a British artillery officer. They marched into captivity as prisoners of war. That story is somewhat well known because of books and movies.

What is less known, unless you are a resident of Singapore, or, like me, from the family of a POW, that beginning a couple of days after the surrender, the Imperial Japanese Army began rounding up ethnic Chinese men and boys across the island city.

This roundup came to known as the Sook Ching (肃清) or “the cleansing.”  The most reliable accounts show that over the next few days, 50,000 men and boys were massacred by the Kempeitai,  the Japanese military secret police. Most of them lined up and shot with machine guns.

Evidence introduced at post war crimes trials showed that this real crime against humanity was planned well in advance of the invasion of what was then the British colony of Malaya.

Each year, including this year, Singapore marks the anniversary of the massacre.

After the IJA occupied the city, the ethnic Chinese men and boys were ordered to report for “registration.” Then they were put into trucks and taken to points around the city to be shot.
In 1962, the Singapore authorities found five mass graves at just one massacre site, Siglap. More have been found since that discovery. 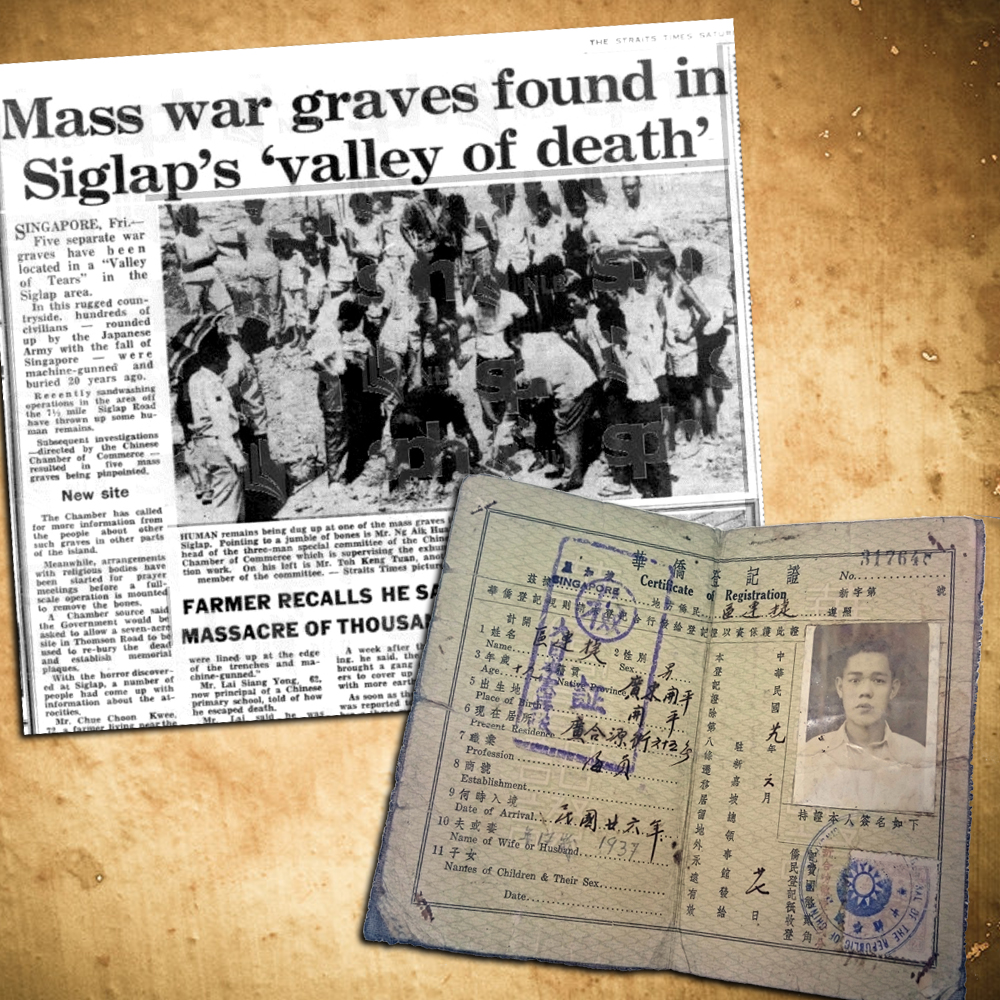 Even in 2022, just as indigenous people in Canada are searching for unmarked graves from residential schools, there are still ongoing searches for graves across Singapore using ground penetrating radar.

So the reader can understand why I have total and utter contempt for any protestor that claims that doing the right thing, getting a safe and effective vaccine to protect themselves and others, that wearing a mask to protect their community constitutes a crime against humanity.

Watching Question Period over the past week or so, I also want to express my total disgust at the braying members of the Conservative Party of Canada, playing politics, giving aid and comfort and support to an unruly mob who have no respect for science and medicine; some of whom came to Ottawa with the fantasy of trying to overthrow a democratically elected government and replace it with a self appointed junta.

My contempt for this movement began just as the first trucks arrived in Ottawa on January 28.
Earlier in the month I had reported a story for Northern Beat online newsmagazine about the high vaccination rate in Kitimat where I live. Kitimat Vaxxed to the Max

On January 29, I was then told that a one time candidate for the Peoples Party of Canada was threatening to sue over the article (even though that there is absolutely no legal basis for that). The email also said he planned a lawsuit against (BC health officer) Bonnie Henry and (BC minister of health) Adrian Dix for their ‘crimes against humanity.’ This (like those protestors who cite the Nuremberg trials of German war criminals) has absolutely no basis in international humanitarian law. (I have an interdisciplinary Masters Degree war crimes studies in history and law from York University and Osgoode Hall Law School). This a dangerous fantasy. 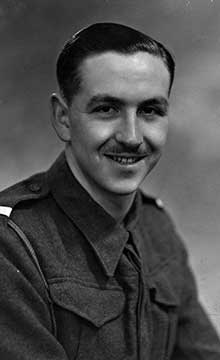 My father as a 21-year-old British lieutenant.

That trigger moment made me sick, given what I know about Japanese war crimes and the victims, including my late father.

My father was one of the 61,806 Allied prisoners of war sent to work as slave labour on the Burma Thailand Railway of Death. Evidence showed that 35,756 POWs died. Again many people will be aware of these crimes against humanity from movies and books.

What is a lot less well known is the fate of the romusha, a word translated as “coolie” and really meant slave. The Japanese forcibly recruited men, women and children from what was then Burma (now Myanmar) for what they called a “Sweat Army.” Official estimates indicate at least 166,000 what today would be called people of colour were sent as forced labour on the railway. Unlike the military which kept records, it is not known how many of these people died from the forced labour, starvation and from the largely forgotten 1943 cholera epidemic that spread across India and Southeast Asia during the war time conditions. The official estimate by war crimes investigators was that the number of deaths was in the tens of thousands. (although that is hard to confirm because a few of the romusha were able to desert and return home. )

When I watch the privileged protestors barbecuing on Wellington Street, I remembered that when my father was freed from the infamous prisoner of war camp at Changi Jail, he weighed just 83 pounds. Do we see any six foot two protestors in Ottawa that are just 83 pounds?

The health effects of imprisonment and slave labour lasted his entire life. He had suffered not only from 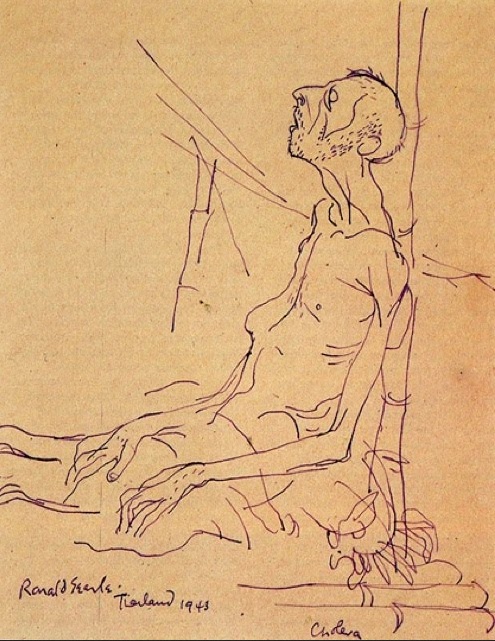 Ronald Searle’s sketch of a prisoner of war suffering from cholera on the Burma Thailand Railway in 1943.

cholera, but dysentery, malaria, the vitamin deficiency disease beri beri and jungle ulcers. I first found out about jungle ulcers when I was about five when, given my height, I noticed a ugly white scar on his thigh. Jungle ulcers occurred when a person experiencing starvation or other stress, suffers a cut or abrasion. With the immune system weakened, a bacterial infection eats away at the muscles and flesh of a limb, usually the lower leg, often decaying the flesh to the bone or even infecting the bone itself.
And people think that wearing a mask is a violation of their personal freedom?

All surviving Allied prisoners of war, who returned to the relatively privileged life in the western world, suffered both physical damage and psychological trauma for the rest of their lives. Only few ever received proper medical and psychiatric treatment for their suffering. Of course, the Burmese romusha and others enslaved across the Japanese Empire did not get any treatment.

There are indications that people who are suffering what is called “long covid” could, unless there is a medical breakthrough, have to deal with those symptoms for the rest of their lives.

To return to the sook ching, I will conclude with an passage from my book The Sonkrai Tribunal A River Kwai  Story where the Allied POWs at Changi Jail witnessed the massacre and worked help some escape.

On Friday February 20, some men…were loaded into three trucks at a local school. At first they thought they were being taken to Changi gaol but the trucks passed by the walls of the prison, and then Serlang Barracks. British prisoners of war watched the trucks passing. The trucks stooped at a collection of huts called Changi Village. There the men were robbed of rings, watches, wallets and cash and marched to Changi Beach…Lying prone in the brush was a squad of Japanese soldiers with machine guns and a bren gun in the middle. They opened fire, continuing as bodies piled up on the beach…
Around dusk, a Malay fisherman approached the British and told them there were survivors. A doctor and two orderlies went to the beach but found no one alive. The next morning, a corporal found one wounded man. He was taken back to the camp and secretly to a military hospital.
A Japanese officer ordered some British prisoners of war to the beach and sat under a palm tree and watched as the prisoners dug shallow graves. Out of sight of the guards, a British medical officer searched the knee high Lalang grass and brush and found four more wounded men, who were covertly taken to hospital.

When British officers complained to the Japanese about the shootings they had witnessed the reply was “These Chinese are bad men. That is why we shot them. Have you anything more to ask?”

There have already been loud objections to those protestors against vaccine mandates, in Ottawa and elsewhere, that have appropriated the yellow star the Nazis forced the Jews in Europe to wear. 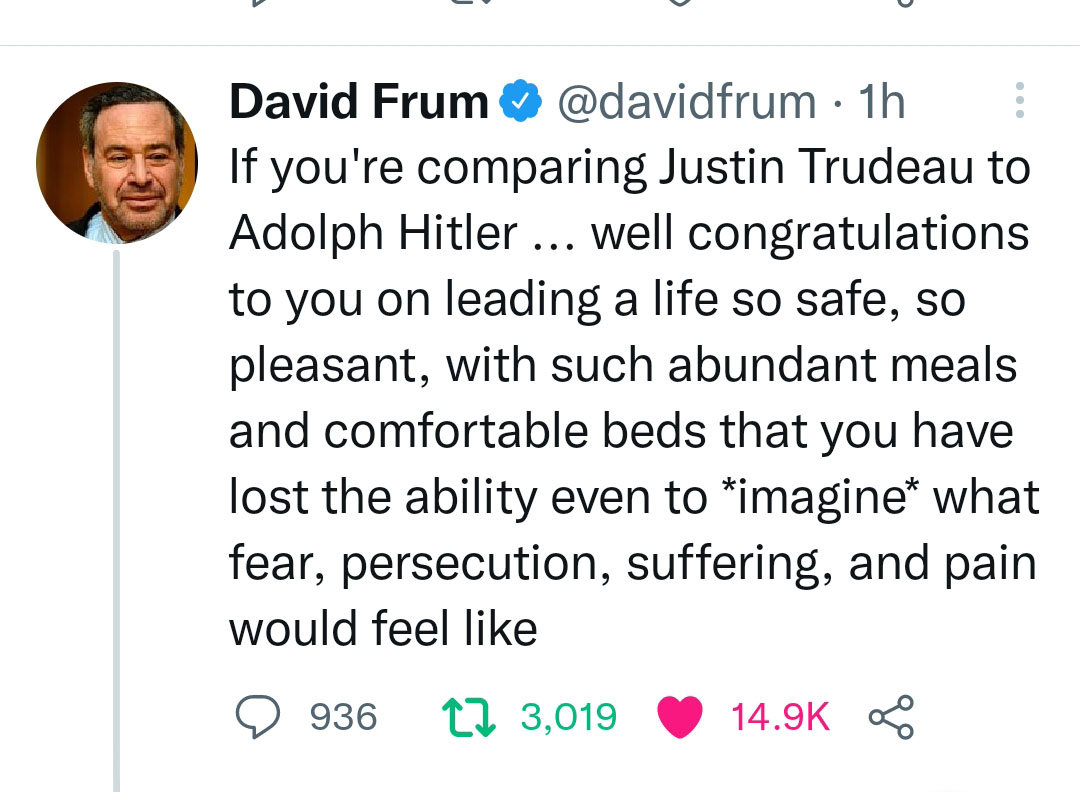 For three weeks the Ottawa protestors have denied freedom to the residents of the city, harassed and threatened those residents. Hundreds of people in Ottawa are demanding the end to what is in effect a hostage taking.  As for the “marginalized” truckers, the price of the big tractor trailers in the protest according what they themselves have told reporters is $155,000. Anyone who owns a large RV or a heavy duty pickup is not struggling working class. The hundreds of minimum wage employees at the Rideau mall and other small stores that have been forced to close the last three weeks by the protest (not health orders) are the real struggling working class.

While some politicians and commentators rightly worry about the justified imposition of Canada’s Emergencies Act, the same politicians ignore the far more dangerous long term implications the continuing war on science and medicine by mostly conservative politicians around the world.

Equally dangerous is the idea that medical treatment to help end a world wide pandemic is some how a crime, that personal and religious freedom outweigh the lives of the millions of people who have died from Covid-19, the millions more who have been made ill by the virus and those living with long Covid.
The question we’re not hearing from the Conservatives in Question Period and the outraged commentators is what happens when the next pandemic inevitably hits the planet? Why are they not denouncing the idea that wearing a mask is a crime against humanity?

More on my book A River Kwai Story: The Sonkrai Tribunal 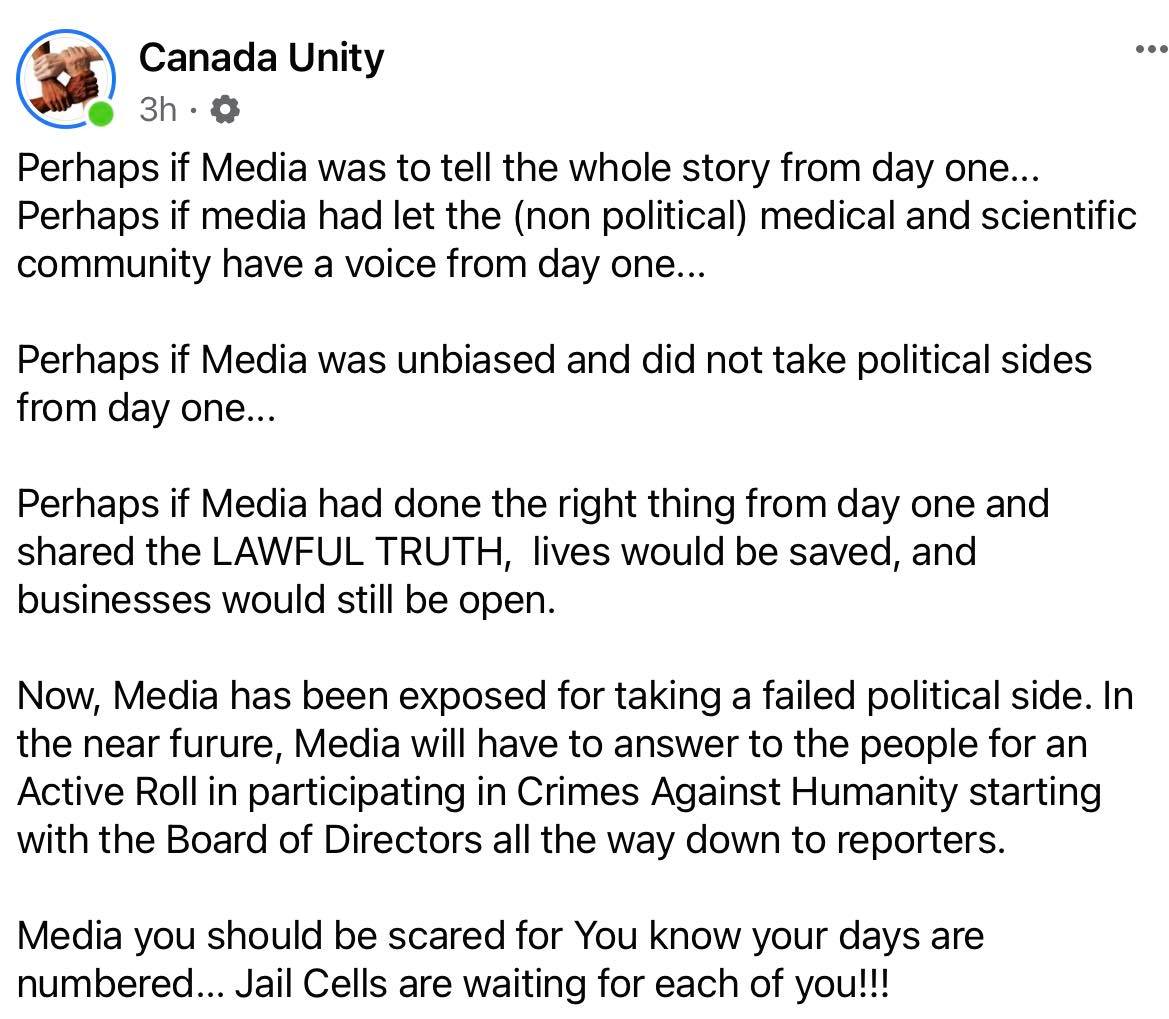 The deluded post from the anti-vaccine protestors about crimes against humanity expressing their hatred of the media.