A re-elected Harper government would crack down on dual citizens originally from Beringia, sources are saying.

The sources say Harper and his advisors consider many Beringians to be a threat to Canada or at least to Harper’s vision of Canada.

According to Statistics Canada there were at least 1,400,685  residents of Beringian origin in Canada at the time of the 2011 census. Almost all those of Beriginan origin were born in Canada and are Canadian citizens by birth.

Beringians are among the fastest growing demographic group in the country.

“We know Beringians have been following well established human smuggling routes for millenia,” a source close to the Harper government said. “But like most migrants there is no immediate fear of persecution in their region of origin.”

Some of those characterized by Harper and his government as “Beringians” are disputing the claim, saying they have been in Canada “from time immemorial.” 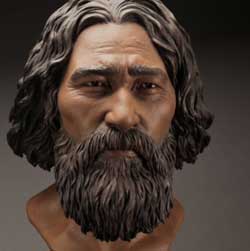 A reconstruction said to represent the notorious human smuggler known as “Kennewick.” If spotted call 911 or Crimestoppers.

Another smuggling route is along the rugged coast of British Columbia where the many fjords and islands are a perfect landing spot for “boat people from Beringia seeking a better economy,” according to a Conservative Party source. Bluefish Cave in the Yukon is known to be a hiding place for the illegal migrants for Beringia, the source says.

The sources say that anyone of Beringian origin convicted of a terrorist or any other anti-government activity would, after serving time in prison, would be stripped of their citizenship and deported back to Beringia. 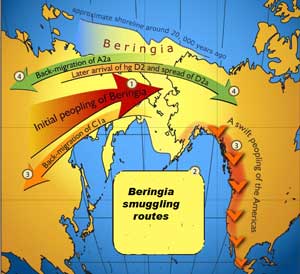 Map showing the human migration, some say smuggling, routes between Beringia and Canada.

“People like Beringians have no respect for Canadian values,” a source in Citizenship and Immigration observes. “Many consider themselves separate nations here, something which is offensive to old stock Canadians.”

Asked just how the government would deport tens of thousands of Beringians to their ancestral homeland, the CIS source said, “We’re hiring Donald Trump as a consultant, he is an expert on these issues.”

When it was pointed out what was once Beringia is part of the old Soviet Union and now Russia, one of the sources said, “Well that will be Vladimir Putin’s problem, not ours and it’s a good way to keep him busy.”

( Just so there’s no misunderstanding the era of social media. This is satire folks)