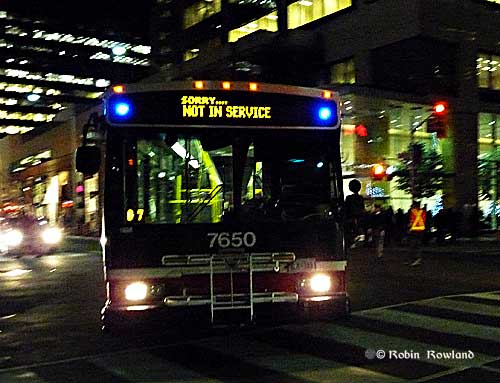 The Toronto Transportation Commission calls the overnight bus service the Blue Night Network.  But for more than 30 years the outbound buses that move out of the downtown core after the bars close have been somewhat affectionately called the “vomit comets.”  For good reason. The term first applied only to the Night Yonge bus which would crawl up the city’s main artery packed with mostly young people heading home after a night in the bars, clubs and discos.  Inevitably some of those who had over indulged that night would vomit.  Sometimes the driver, warned of an impending eruption would let the  kid off the bus and wait while he or she completed what had to be done.

With the TTC’s expansion of night service in the past decades, the vomit comets has come to refer to all the night services, street cars and buses, that snake out of downtown in the early hours of the morning. (And with the growth of business in the suburbs that means there will also be people heading in town from suburban entertainment locations)

I left Toronto a year ago and have watched with horror the devastation that Mayor Rob Ford wants to impose on what was once called “the city that works.”

I have also waited for my former colleagues in the media who were quick to see the problems that closing libraries would cause to pick up on the utter and total stupidity of eliminating, cutting back or making the night bus service a “premium service.”     Unfortunately, the Toronto media hasn’t yet picked up on this story. Today’s stories were all about subway and bus over crowding.

TTC: Consider rolling back some of the service improvements implemented under the Ridership Growth Strategy, including changes to the crowding standard.  Also consider reducing/eliminating the Blue Night Network or making it a premium service by raising fares;

This recommendation that  first came from the consulting firm KPMG is a prime example of the kind of short sighted bubble minded thinking that led Conrad Black (someone who I seldom agree with. This time I do agree) with to say in the National Post that United States wasted $1-trillion in consulting fees in 2008.

It certainly appears that the KPMG report was a waste of taxpayers money,  one has to wonder what city they were talking about?

Unfortunately this elimination of service is now apparently favoured by the city staff and Mayor Rob Ford and his allies on council.

So a question for the Lincoln driving consultants at KPMG and for Mayor Rob Ford, who apparently wants to get everyone into cars no matter what, is this: once you close down or cut back the night pubic transit network, how many deaths and injuries from impaired driving are willing to tolerate? In your budgeting on the eliminating the night buses, did  you count the costs of dealing with all the accidents that will result?

A second question, for the over paid KPMG consultants, is how are people who have early shifts going to get to work in the morning before the subway opens at 6  am six days a week, 9 am on Sundays?

The last time I used the night bus wasn’t that long ago,  about six months before I left Toronto, sprung from a medical clinic after an overnight test at 5:30 am, no taxis in sight, I grabbed a bus down Yonge St and then a second along the Danforth to my former home in the Pocket off Jones Avenue.

When I was much younger, living in a cheap, roach filled apartment on Yonge Street north of Lawrence, in the late 1970s, I often used the night bus, both to get home and to go to work.  I was an editorial assistant at CBC and worked all kinds of odd hours. That meant you could get off work at 3 am on some shifts,  start work at 4 am on other shifts.  The only way home and the only way to work was that night bus.

In my 20s, I also enjoyed  all the advantages of the nightlife of downtown Toronto, grabbing the Night Yonge bus at 2, 3 or 4 in the morning.  The bus, no matter the early hour, was often packed  full of people, mostly young, but also older,  some who had too much alcohol or other substances.

Many years later, in the 1990s, when I was an early morning lineup editor for what was then Newsworld  it was back on the night bus, to head into work, along with other people whose jobs called for them to be at their desks or work places long before the subway began running.

Most of these folks were not relatively well paid TV news lineup editors. So I have to wonder if they can afford the premium fares? One wonders if the consultants, senior city bureaucrats and council members actually know who ride the night buses? Why would the  consultants and the city even consider premium fares for cleaners heading home  after a night of pushing brooms or the barrista who cheerfully gives you that morning coffee? Of course the consultants don’t have to be a work at 5 am, the barrista is brewing coffee hours before those consultants get their lattes and senior city bureaucrats grab their double doubles before heading to their plush offices.  Then there are those politicians who only order a double double when the TV cameras are rolling.

I am most concerned about what might happen in the downtown Entertainment District, which is already a headache for the Toronto Police Service.   The few times in recent years that I worked past the subway closing at the CBC (now on Front Street) and would grab the Queen car home, my fellow passengers on the streetcar,  coming out of the Entertainment District bars, showed nothing had changed in more than 30 years. Teenagers and people in their twenties still come downtown for a good time, stay past the subway closing and then take the TTC home and many still can’t handle the booze.

Now consider what happens when the night service is eliminated.   How are  all those people from eighteen (or younger if they are drinking illegally) to eighty (after too much wine at more elegant setting) going to get home, especially if they’ve had too much to drink or have used other entertainment chemicals? Some have always taken taxis, perhaps more will. But a lot of them, who would have taken public transportation, will try to drive and they will impaired.

That means that there will be more police needed to patrol the streets and highways of Toronto at a time when the report recommends:

Toronto Police Service: Consider reducing the size of the police force through budgetary means, and a business based approach to efficiency, and effectiveness.  This could include reducing or temporarily eliminating hiring of new officers, providing incentives for early retirement benefits savings, and one-officer patrols in appropriate circumstances;

If the drunks get into accidents, and they will, that means a greater, not lesser need for  Toronto Fire and EMS. But the report recommends.

So if more drunks are on the road and we need more cops to stop  those drunks,  more fire and EMS to respond to emergencies, that means the first responder resources will be taken from other areas

Then of course, if people are injured, there are hospital costs, borne by the provincial taxpayers.  If they are charged and many will be charged there are court costs. If convicted and jailed, provincial or federal prison costs (lots of room in the jails Harper and Toews want to build). City road staff may be called upon to cleanup accident sites.  Hydro staff to put up the hydro poles that are knocked down by drunk drivers.

Have the insurance companies thought about what eliminating night bus service will do to their bottom lines?  Probably not, but I am sure if the TTC cutbacks go ahead, the CFOs of insurance companies are going to love Rob Ford and then they will raise the already high premiums for residents of Toronto another notch.

The trouble with short-sighted ill-considered slash and burn budget cuts is that there is never any consideration of the “for the want of a nail, want of a shoe” consequences.   Closing and cutting libraries is foolish, it threatens the long term viability of society by eliminating places that people can learn and improve themselves.

(Note this blog hasn’t been that active. I use it for occasional personal writing,  See my new news site Northwest Coast Energy News and Robin Rowland Photography)