Ronald Searle, war artist (and cartoonist) dies at 91. He was posted to Iraq but ended up in Singapore and on the Railway of Death

When the news of Searle’s death was released today, Jan. 3, 2012, most of the world’s media paid tribute to Searle as one of Great Britain’s best contemporary cartoonists, the creator of the nasty girls at St. Trinian’s school, which became one of the favourite British comedy movie series in the black and white 1950s.

He also created the delightful opening cartoon credits for the movie Those Magnificent Men in Their Flying Machines. 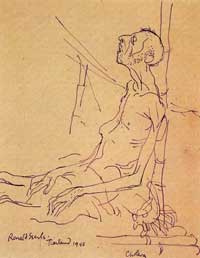 Ronald Searle’s sketch of a POW dying from cholera

Most of the obituaries have concentrated on Searle’s movie career, that is what is most known to the public. Many of those obits only touch on the fact that Searle was one of the great war artists of the Greatest Generation, those who served in the Second World War.

That is how I first came to know Searle as a kid, as a war artist. My father, who was prisoner of war on the River Kwai, along with Searle, had one of the several early books that used Searle’s secret sketches of their lives in the Japanese prisoner of war camps.

One night my father took the family out to see a movie. The first time he said we had to see a movie was a re-release of Gone With the Wind. The second was to see the movie based on his old acquaintance Ronald Searle’s imagination when a St. Trinians movie to came to town. (and it was hilarious, especially if you were a kid at school)

It was in the prisoner of war camps along the River Kwai that Searle secretly sketched the life in the camps and the Japanese atrocities against the prisoners. He did the sketches on any scrap of paper that was available and like a few other POW artists and diarists, kept the material hidden from the constant searches by Japanese guards (where discovery would have meant execution) until liberation came in 1945 and he returned home to the United Kingdom.

Searle had an exhibition of the drawings in Cambridge, and the sketches were used in various history books about the prison camps until published in 1986 To the Kwai — and Back: War Drawings 1939-1945.

While he became known as a cartoonist and illustrator, not only for the movies, but by creating covers for The New Yorker, and for advertising,  Searle also continued his serious work, covering John Kennedy’s presidential campaign and the Adolph Eichmann trial in Jerusalem for Life. He also drew editorial cartoons for Le Monde.

Like Arthur Conan Doyle and Sherlock Holmes, Searle came to detest the way St. Trinians had taken over his life and once tried to get rid it of it all by drawing the girls at St. Trinians blowing up their school with an atom bomb. It didn’t work.

There are lots of links below to the various media tributes to Searle.

There is one story about Ronald Searle that the media has missed, especially the media in both the US and UK, perhaps only the son of a POW who has read Searle’s book (and who has written his own book on the prison camps) would know.

It was an accident of history that sent Ronald Searle and his unit to Singapore to fight the Japanese. He was part of the British 18th Division and in November, 1941, that division was part of a super secret joint British and American mission to Iraq. Even though the United States was officially at peace, President Franklin Roosevelt and Prime Minister Winston Churchill agreed on a mission that would secure the Iraqi oil fields in case the Germans ever broke through either in Africa or the Caucuses. So the 18th Division was shipped out, under secret orders, to Halifax, where it picked up a United States Navy escort. Sketches of life on board the American transport ships escorted by the US Navy (where Searle said the food was wonderful compared to what they had in wartime Britain) are in Searle’s book.

On Dec. 8, 1941, the secret convoy was just off South Africa, when news reached them of the attack on Pearl Harbour. The US Navy escorts were ordered back to the mid-Atlantic, and the 18th Division, trained and equipped for desert warfare, was diverted, ill-prepared, to help defend Singapore.

One wonders what would have happened if the convoy had arrived in Iraq before the attacks of Dec. 7 and 8, 1941. Would the subsequent history of Iraq been any different? (a great subject for “counterfactual history” or “alternate worlds”) Or would Searle’s sketches of that Iraq mission been used again in the early years of the 21st century?

The Hollywood Reporter quotes John Lennon as saying, “I started trying to draw like Ronald Searle when I was about eight. So there was Jabberwocky and Ronald Searle I was turning into by the time I was thirteen. You know, I was determined to be Lewis Carroll (giggles) with a hint of Ronald Searle.”

A full statement from Searle’s family read as follows: “Ronald William Fordham Searle, born 3 March 1920, passed away peacefully in his sleep, after a short illness, with his children, Kate and John, and his grandson, Daniel, beside him, on 30 December 2011 in Draguignan, France.
“He requested a private cremation with no fuss and no flowers.”