Don’t ask, don’t tell, but you can use the flash drive

A U.S. federal judge stuck down the American ban on gays in the military on Sept. 9. 2010. District Judge  Virginia Phillips ruled  that policy of don’t ask don’t tell was a violation  of the US First Amendment that gives Americans freedom of speech (pretty obvious once you think of it)

And speaking of free speech, as we know, newspapers tie ads to the phrases. So when the  AP first leads appeared on the New York Times website on Thursday, Sept. 9, 2010, up popped an ad about some sort USB drive. The ad is built around the US military dropping the ban on a high security flash drive. Not to give the company involved any more publicity, but a flash drive with military level security would come in helpful, especially for investigative reporters.

The lesson is that newspapers have to be careful when they tie ads to the text of a breaking news story. 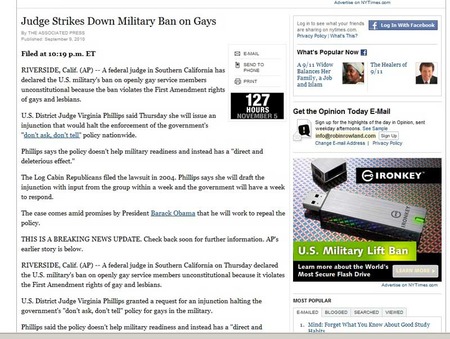