A juvenile steller’s jay learns to crack a nut

I am lucky enough to be surrounded by the magnificent steller’s jay.   A group of them live in a tall conifer across a small park from my house.  (Unfortunately BC Hydro contractors opened up one part of the tree while rewiring the neighbourhood so the steller’s jays in that tree may be vulnerable.)  Others frequently visit (and may be living–I am not sure) in the cedar trees that mark the boundary with my neighbour’s house.  So the steller’s jays are frequent visitors to the feeder on my back deck.

Friday night was a beautiful summer evening. I spotted three steller’s jays in the grass of my backyard.  I grabbed a camera, stepped out and saw–and heard–something I hadn’t seen in eight years.

For my feeder I used a wildbird mixture that it is mostly sunflower seeds, maize and shelled peanuts.  Although steller’s jays love peanuts I have never left out peanuts in the shell. But one of my neighbors does and I have seen from time to time a steller’s jay with a peanut in its mouth, usually on the ground before flying off into the trees.

What I saw Friday night (again Monday night) was entirely different.  One steller’s jay had found a way to crack the nut case in my old rotten fence.   Tonight there were two at it.

First about the fence, it’s old, probably original to the house when it was built in 1960, with parts rotting away and falling apart.  I had planned to replace it this summer but then I had to pay for major car repairs. Before that it was a new roof and a new furnace.

Steller’s jays, like all corvids, are highly intelligent birds.  It seems that scientists studying corvid intelligence, when they are not studying ravens and crows, concentrate on the scrub jay, which means British Columbia’s beautiful official bird doesn’t get much scientific respect with only a few university researchers looking at the bird (at least that is what I could find out in an online search.)

On Friday evening, that one steller’s jay found the perfect place to anchor a peanut in the shell.  My rotten old fence.

I asked Professor Jeffrey M. Black who does study steller’s jays at Humboldt University in Arcata, California what the jays were doing:

All three jays in these photos are of juveniles; note the fluffy grey chests and behind legs, and the yellow skin at the corner of the mouth. You may have noticed them giving odd raspy juvenile type calls too. Sometimes the young jays at this age, which come to feeders with peanuts, ignore peanuts and sample the seeds instead. It seems they get ‘turned on’ to peanuts through ‘social learning’ – meaning they observer others and learn there’s food inside. Seems like the young jay in the photos was new to the task. Experienced jays seem to extract the nuts from peanut shells quite quickly with deft strikes and prying movements (unlike the young bird in the photos). I agree, the youngster seems quite clever to have pushed the nut against a crack to hold it in place before aiming blows. As for the hammering sound. I suspect that was the beak coming into contact with the wooden fence. Incidentally, hammering on wood (knock, knock, knock) seems to be a behavior used in frustration or perhaps to signal a threat during aggressive encounter. 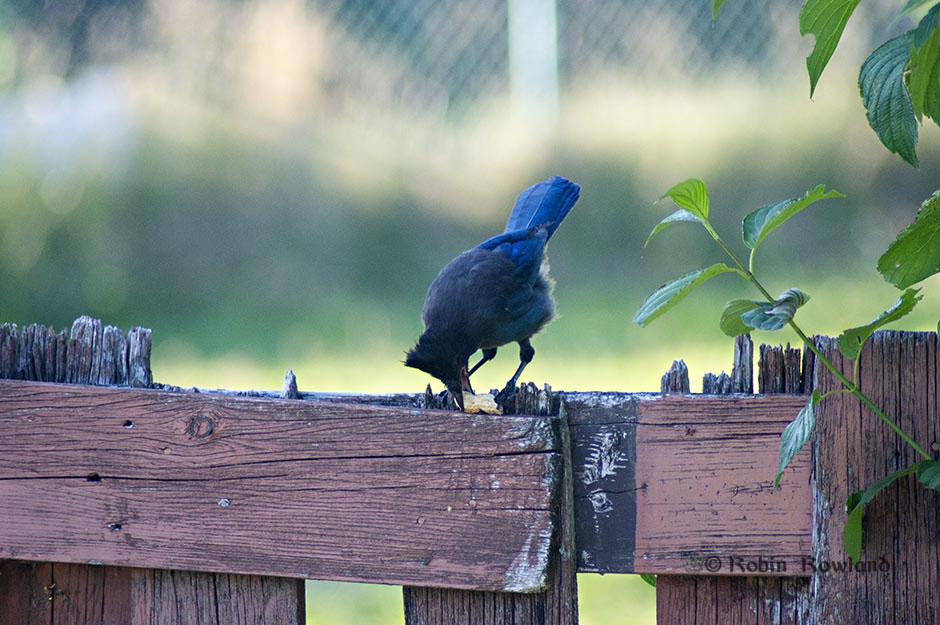 The steller’s jay is wrestling with the shelled peanut. 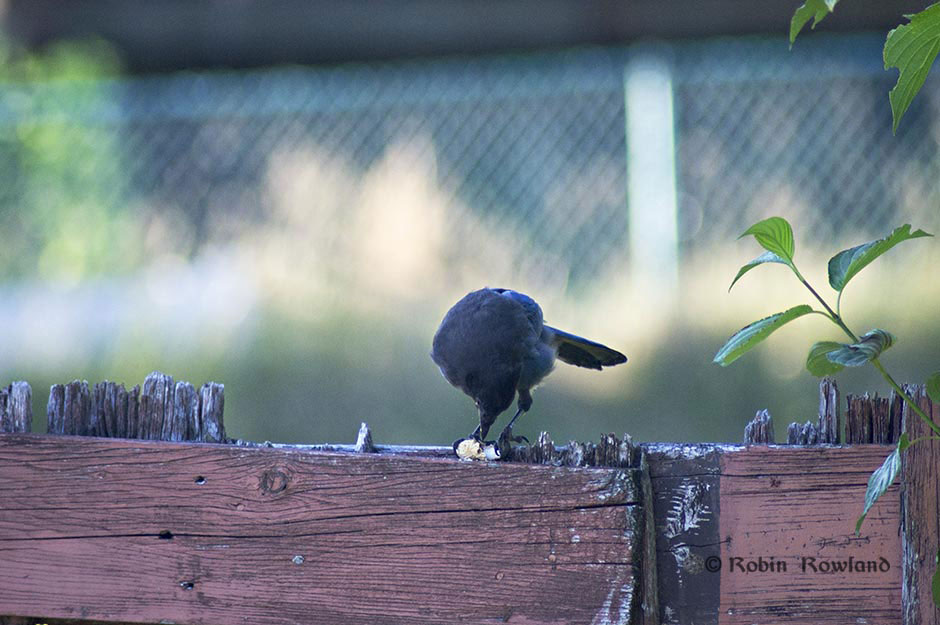 It seems to have done quite well demolishing the shell, in a gap against the old fence post. But apparently half the peanut shell was a hard nut to crack. 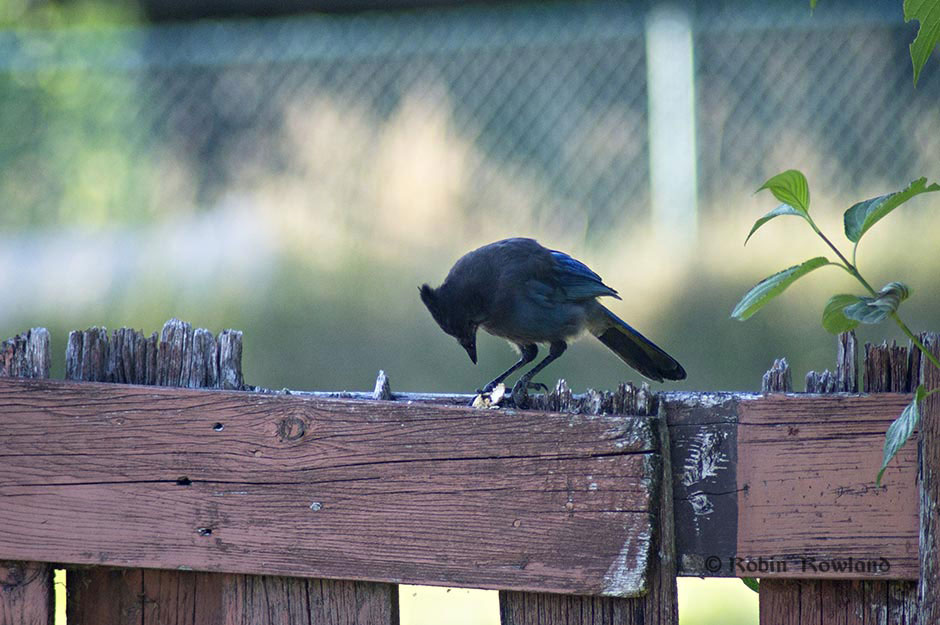 The steller’s jay takes a look…. 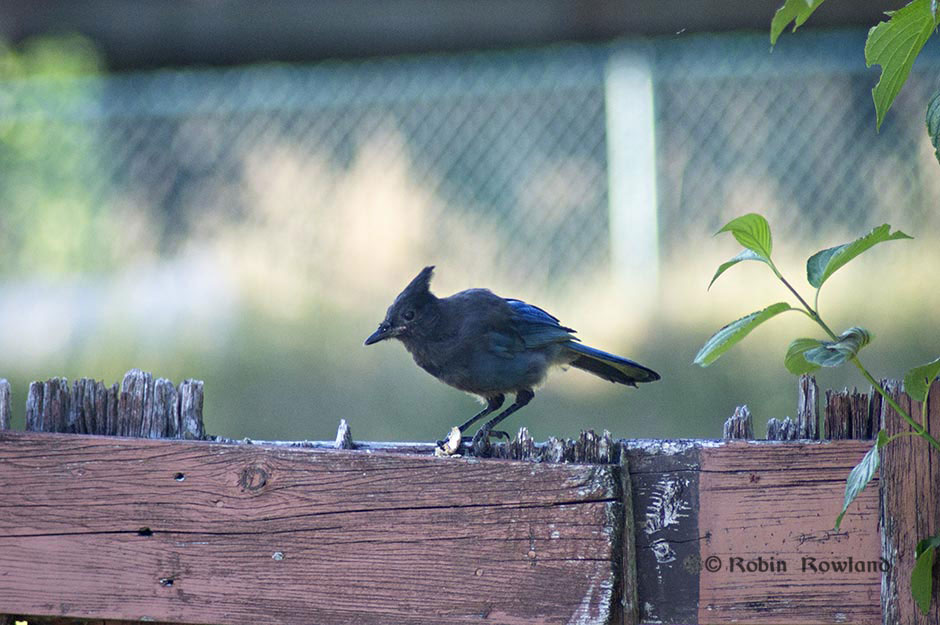 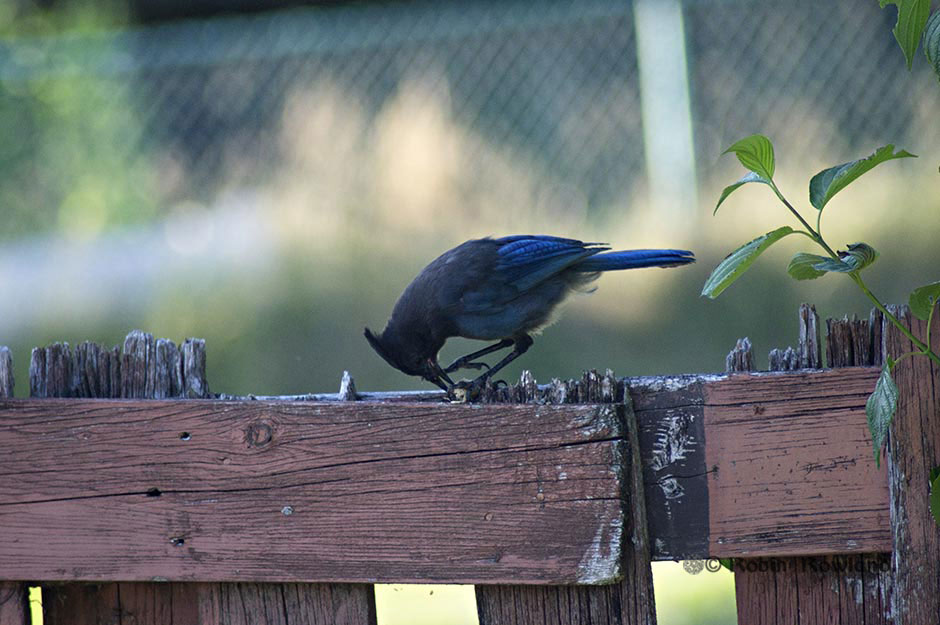 With the peanut shell firmly anchored against the wood and held tight in its feet, the steller’s jay repeatedly taps with its beak against the shell. 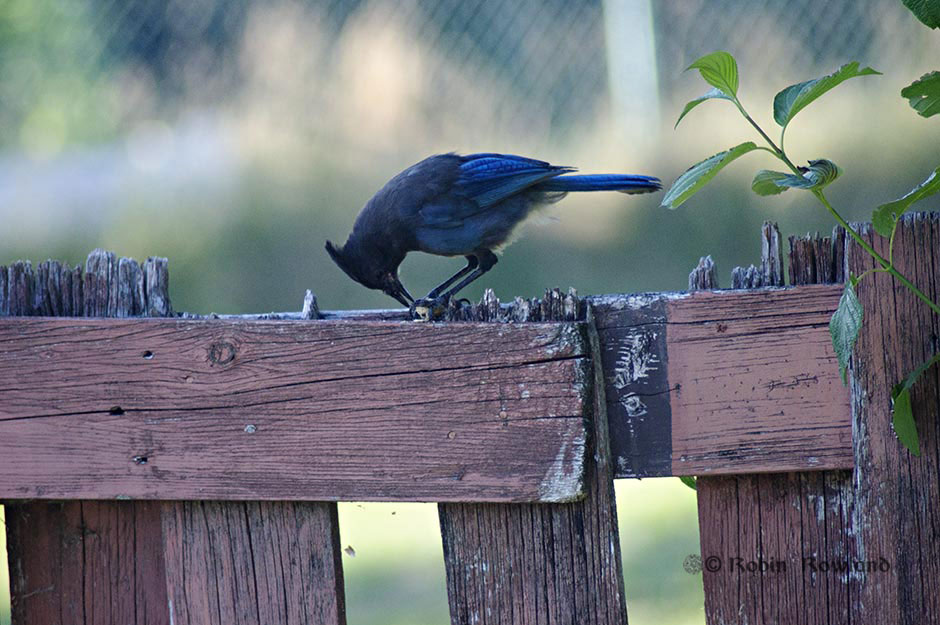 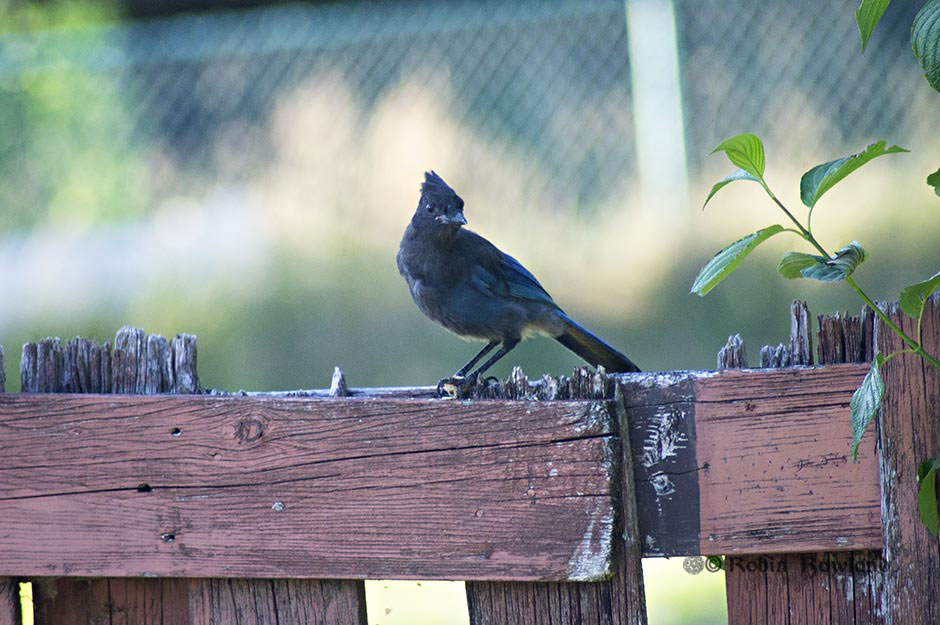 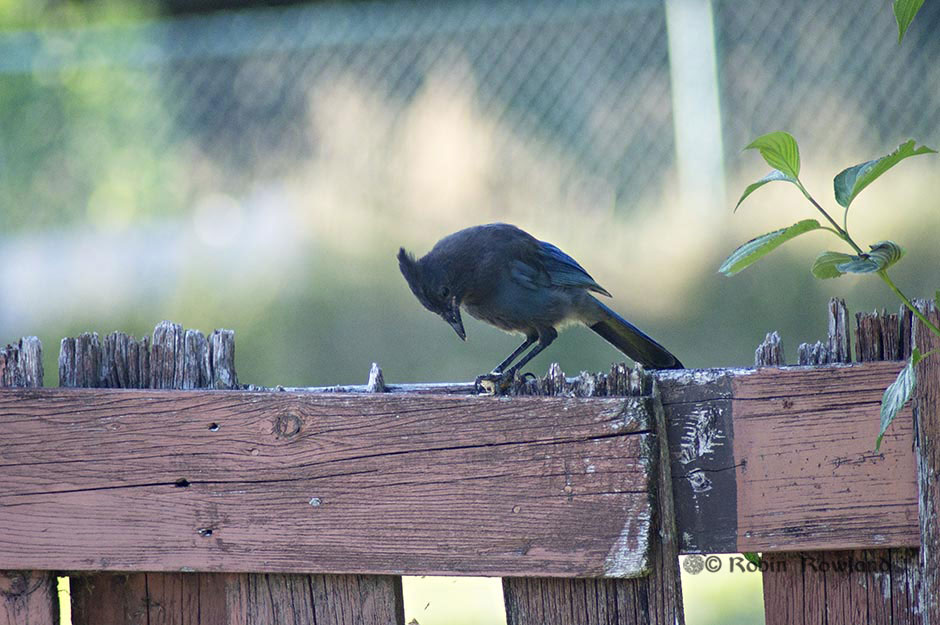 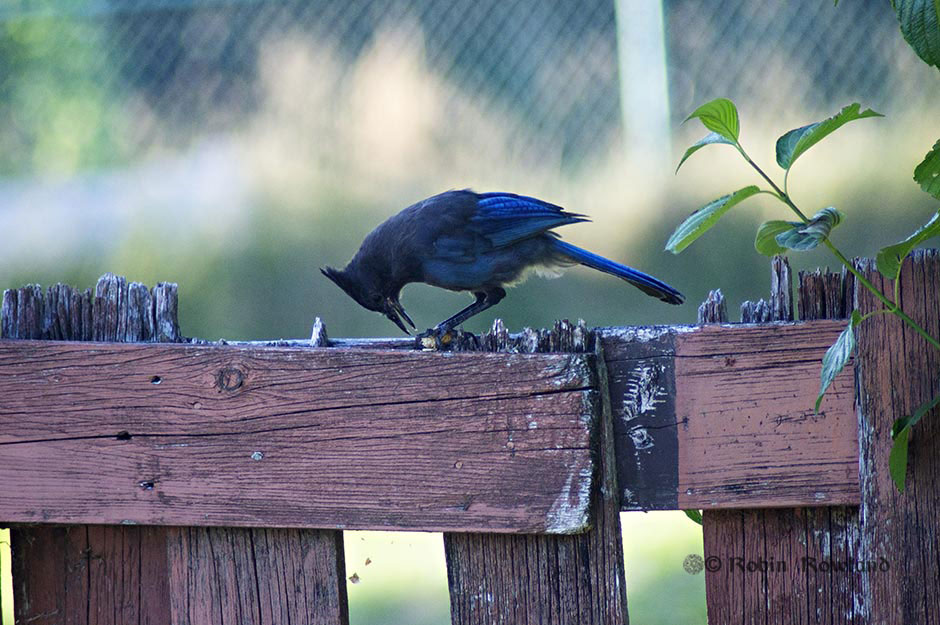 It keeps trying.  You can see part of the shell (or perhaps the peanut) on the beak. 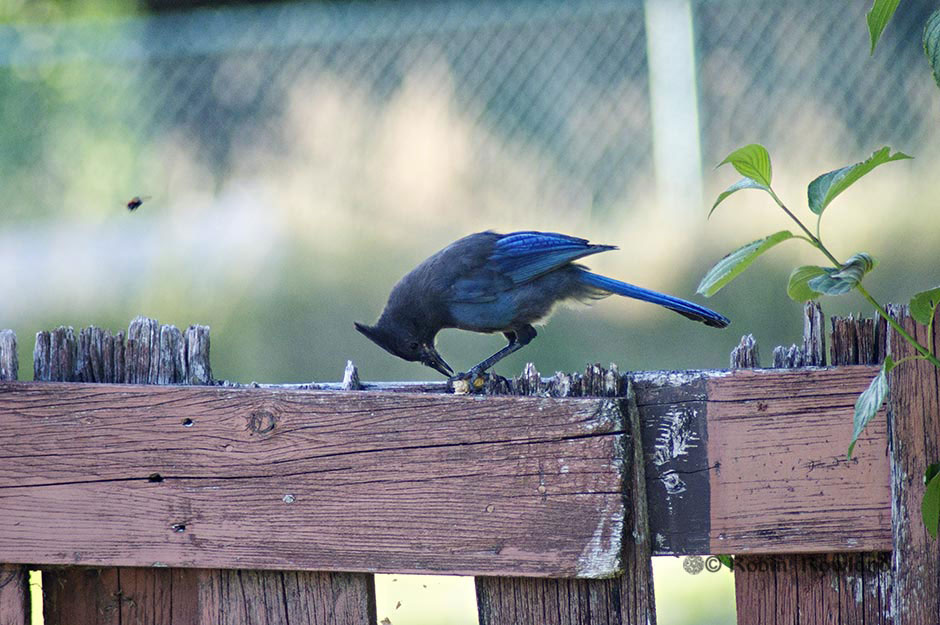 A bee flies by… 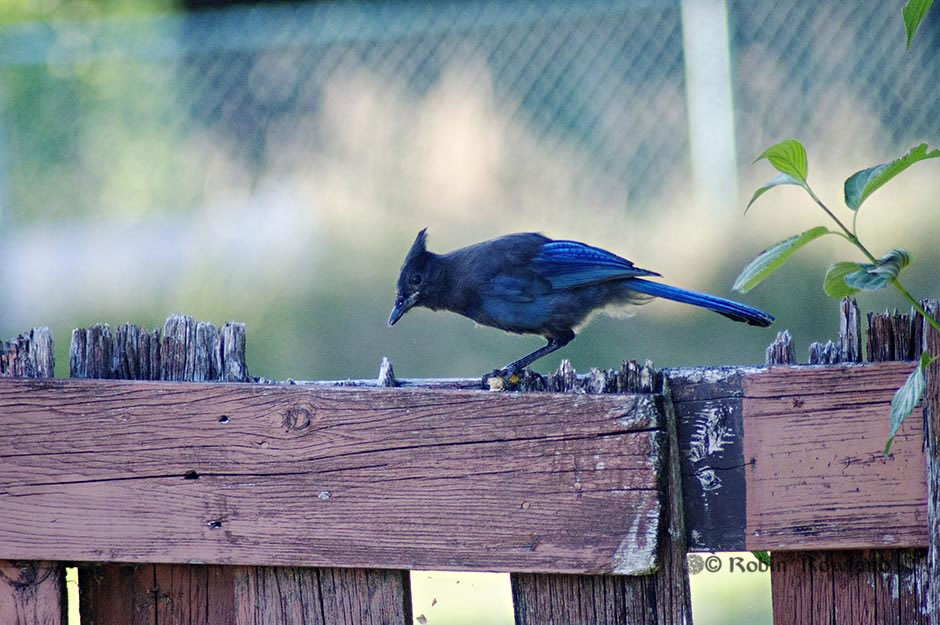 … as the steller’s jay pauses for a second or two. 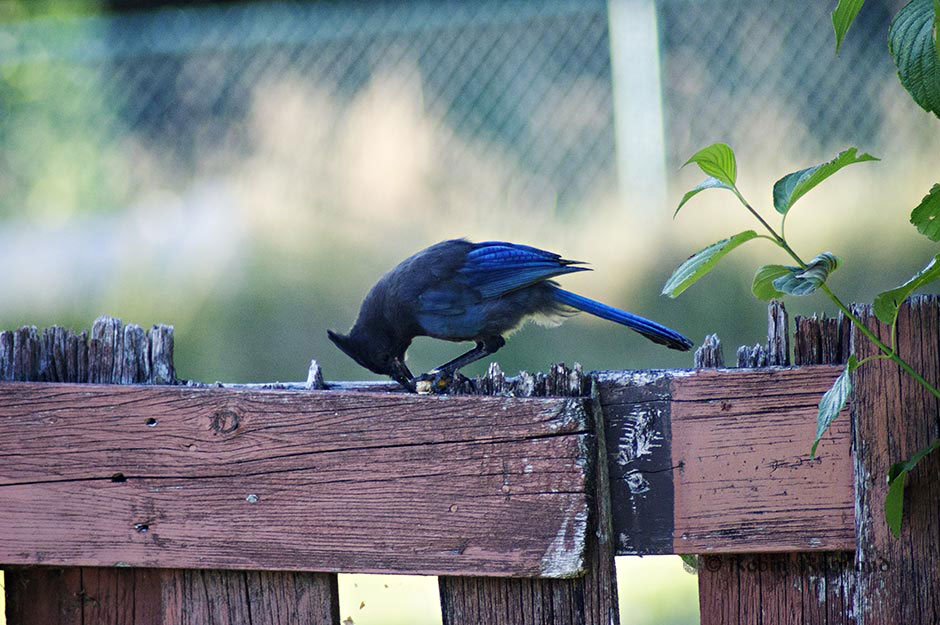 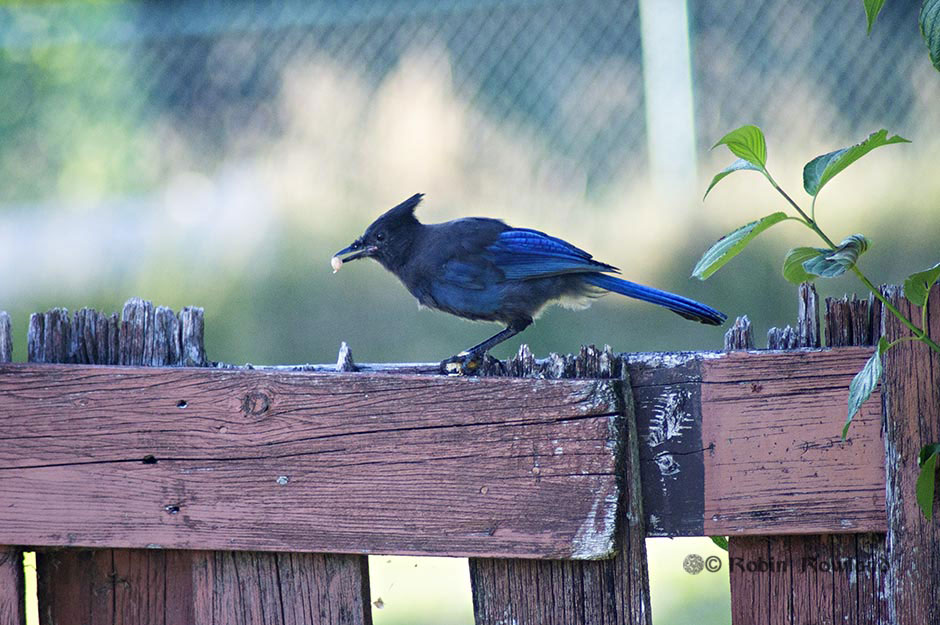 Finally success! It has the peanut out of the shell. 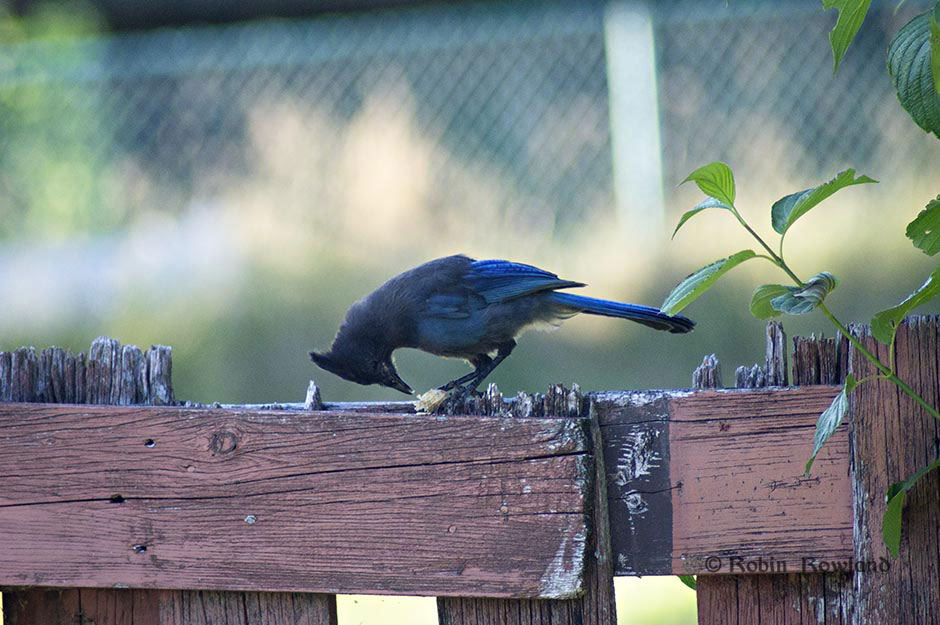 It enjoys its meal. 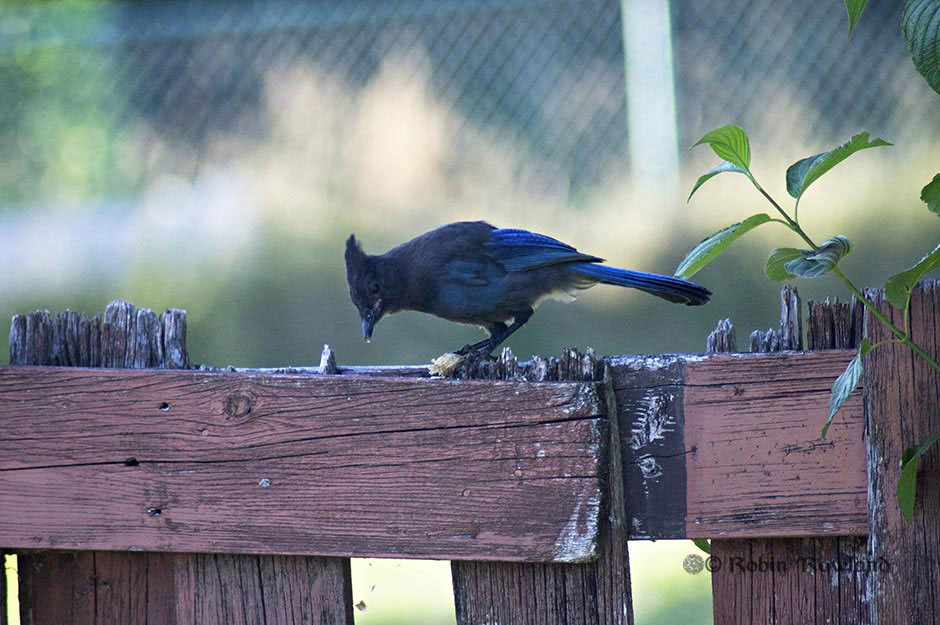 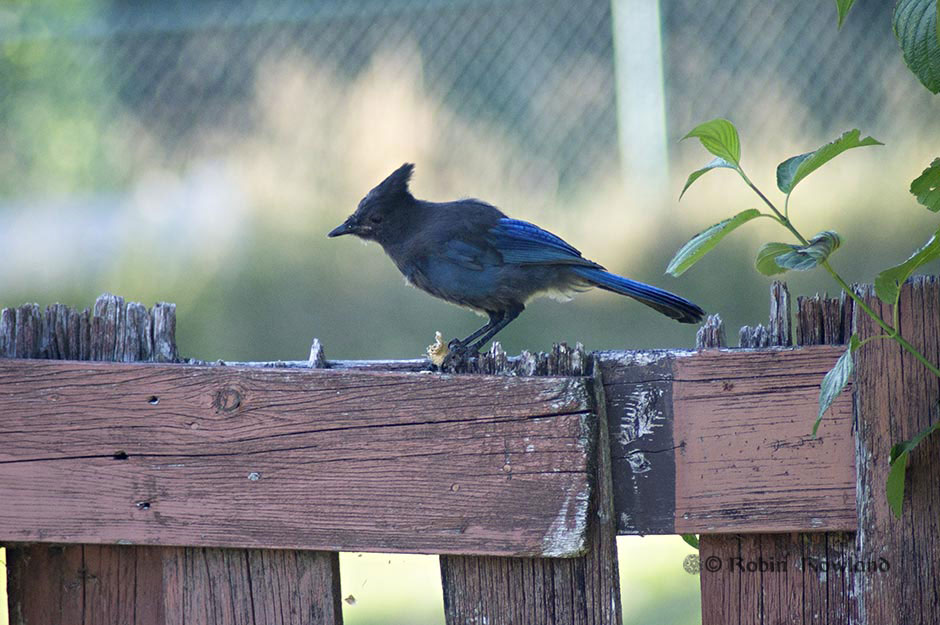 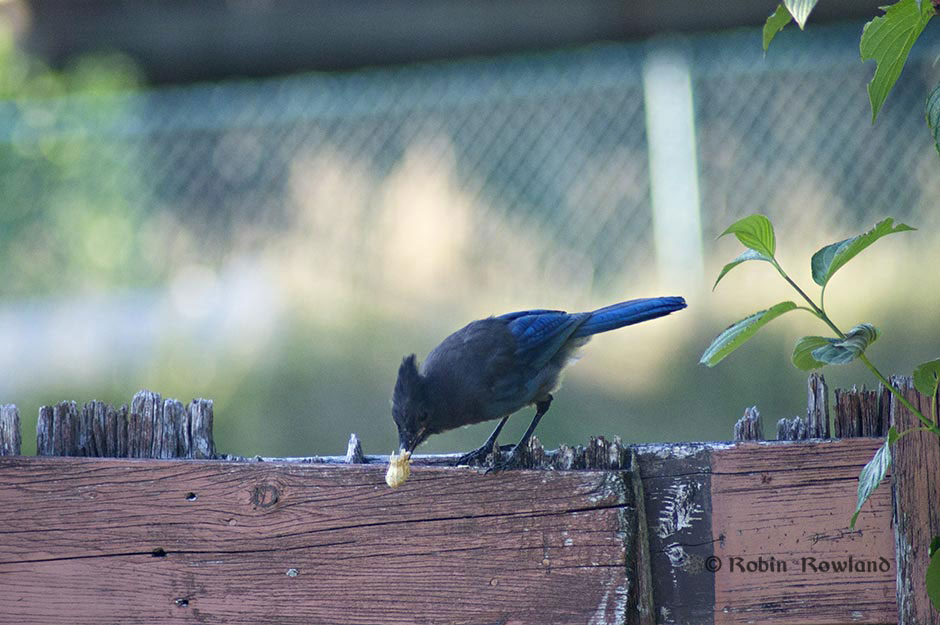 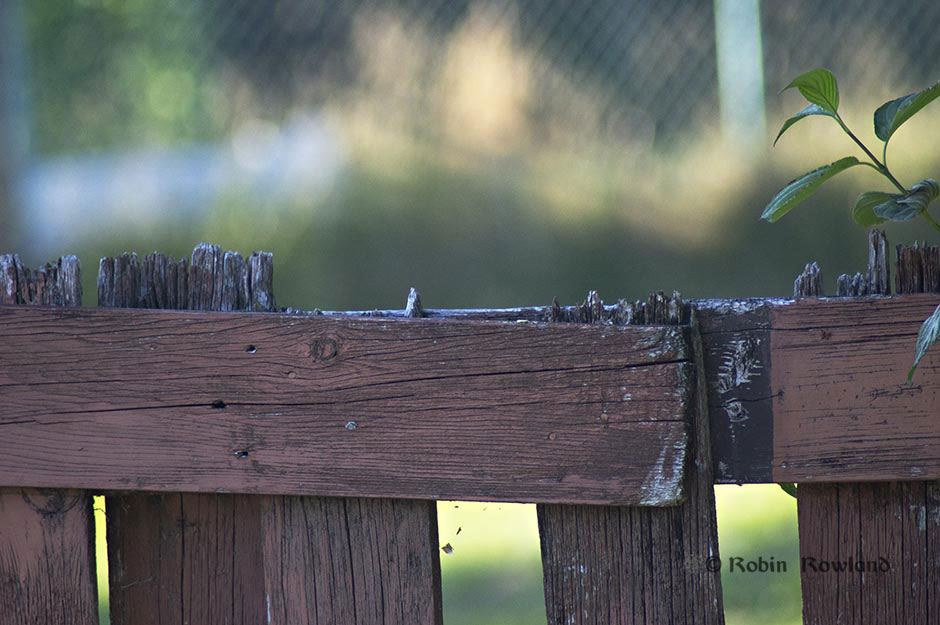 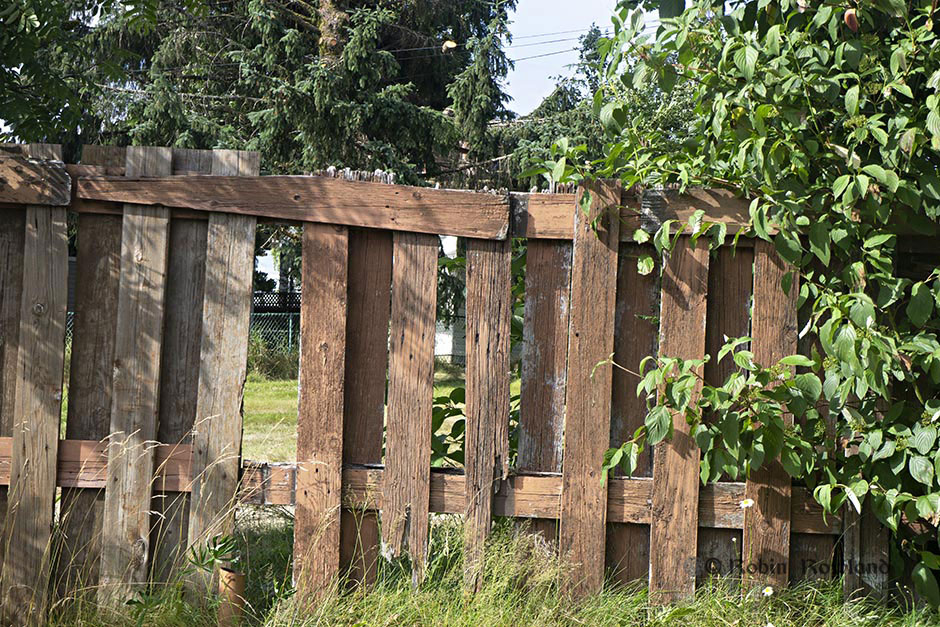 A long shot of my fence taken the next morning. 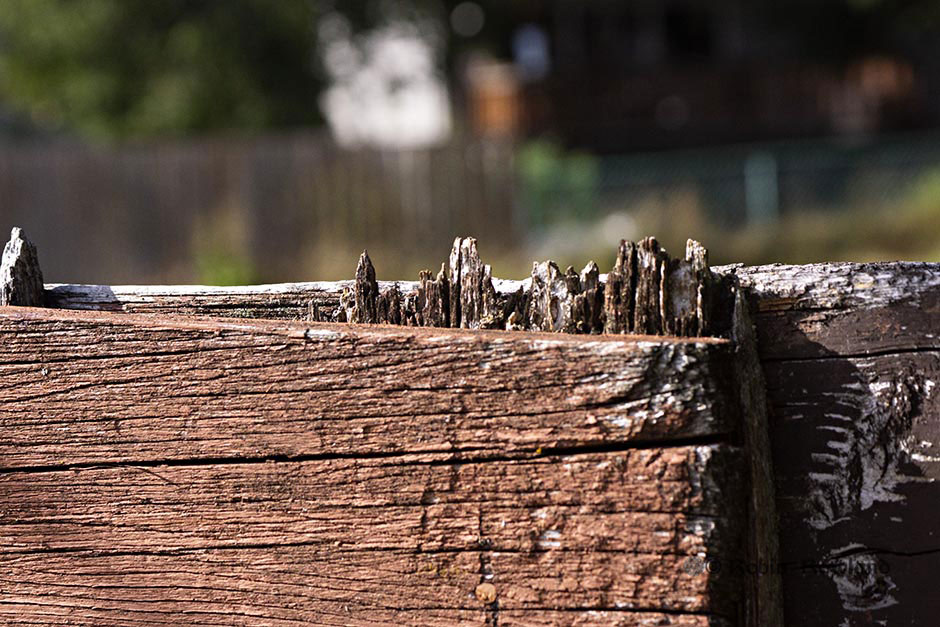 A closer view of the area that the steller’s jay used to crack the nut. 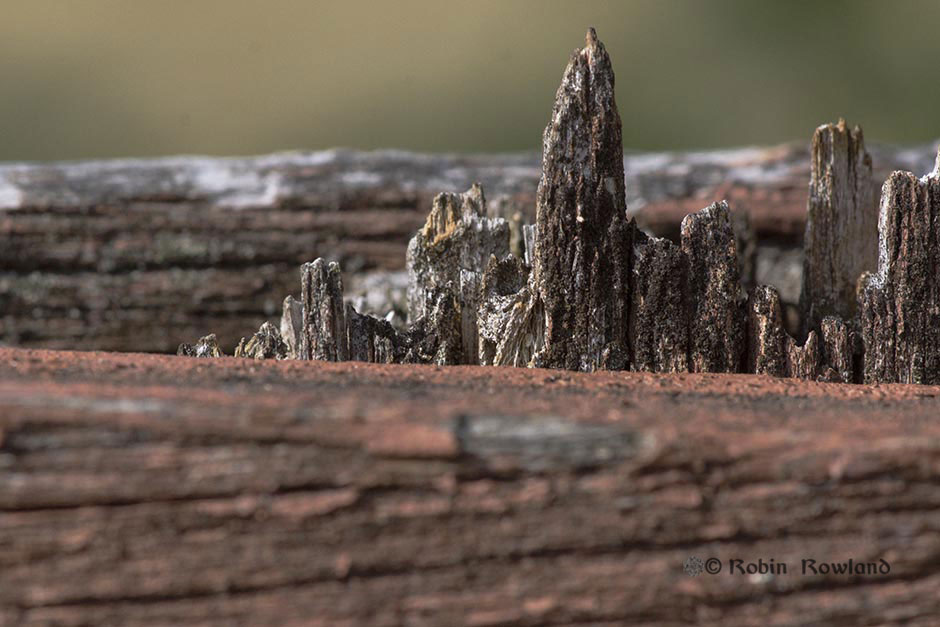 And an even closer shot showing all the possibilities for an intelligent bird to anchor a peanut.

I just happened to look tonight (Monday July 16) and the steller’s jays were back at the rotten part of the fence. 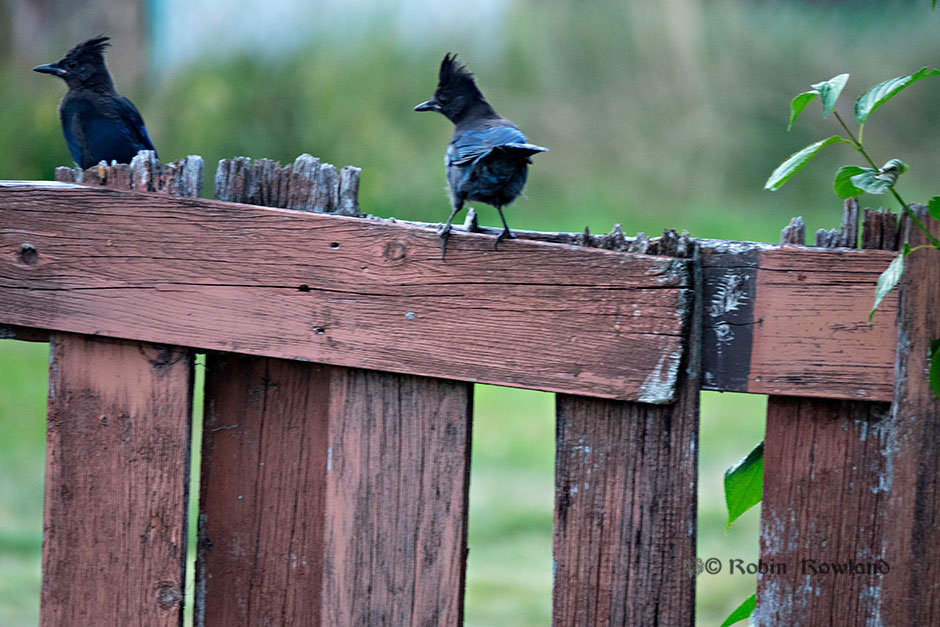 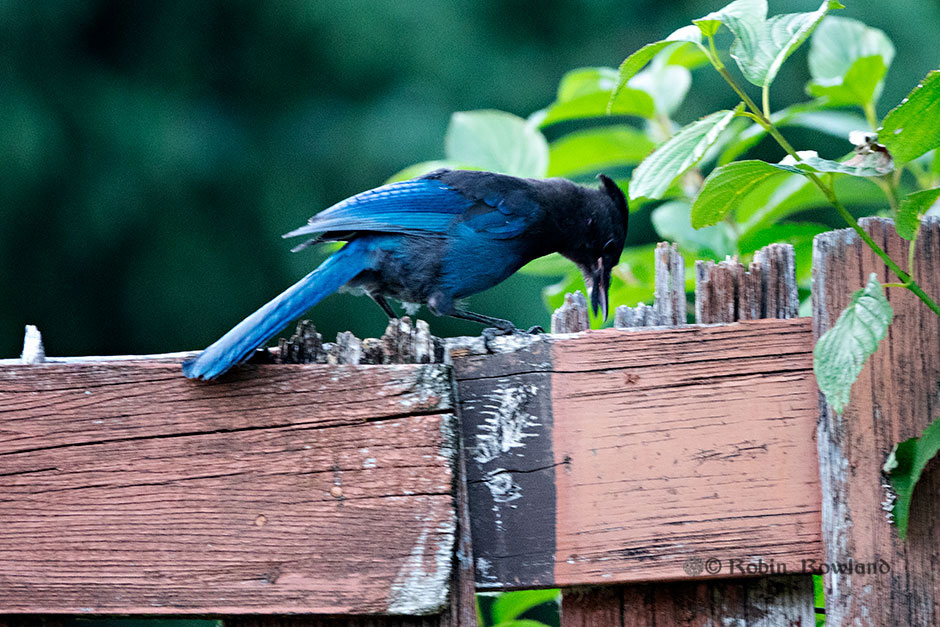 This steller’s jay was back close to the spot where the peanut was cracked on Friday night. 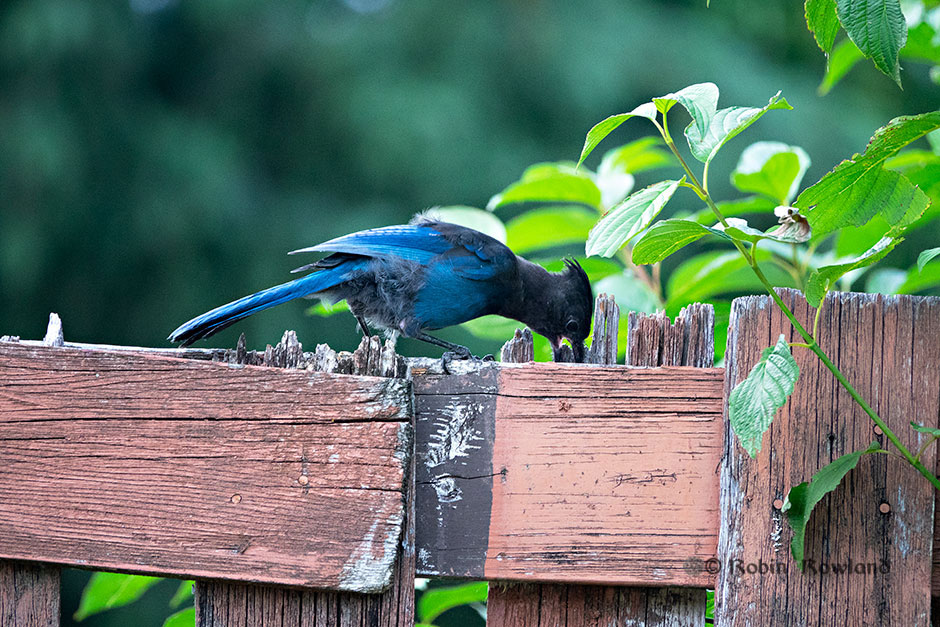 No sign of peanuts tonight, so it was probably looking for bugs. 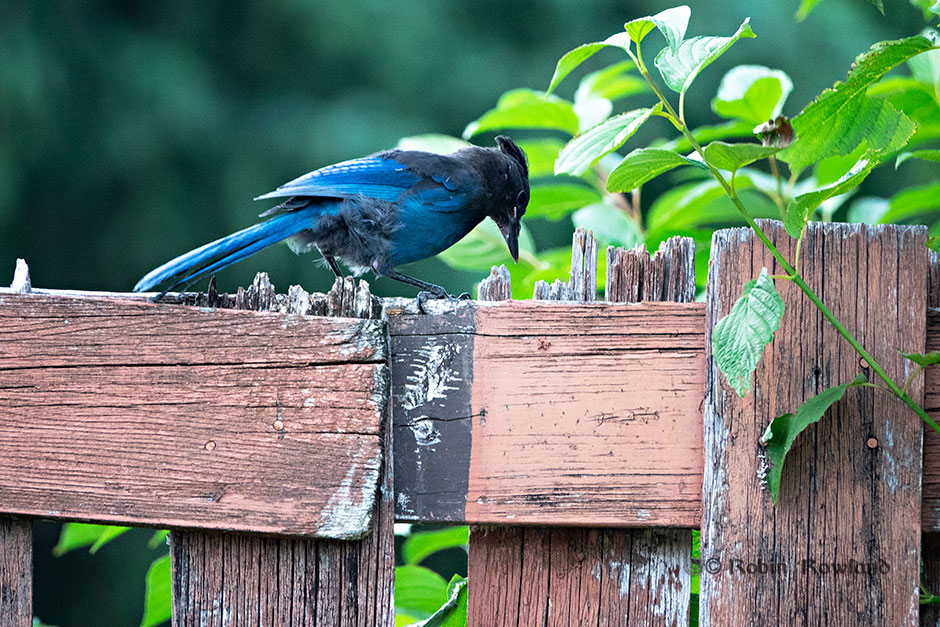 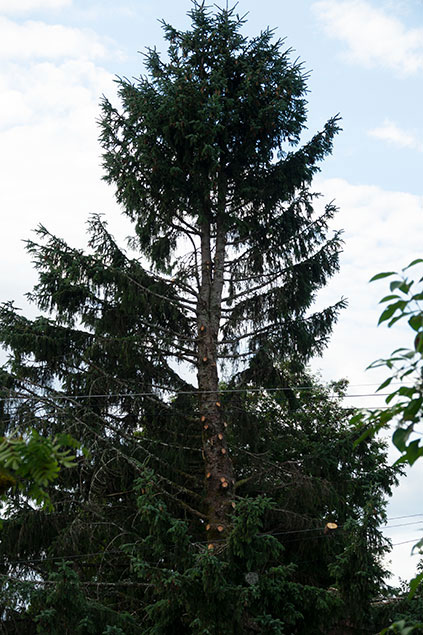 This is the tree where I’ve seen the steller’s jay living for the past eight years. You can see how BC Hydro contractors cleared a whole section of the tree to install new power lines that you can also see in the image.